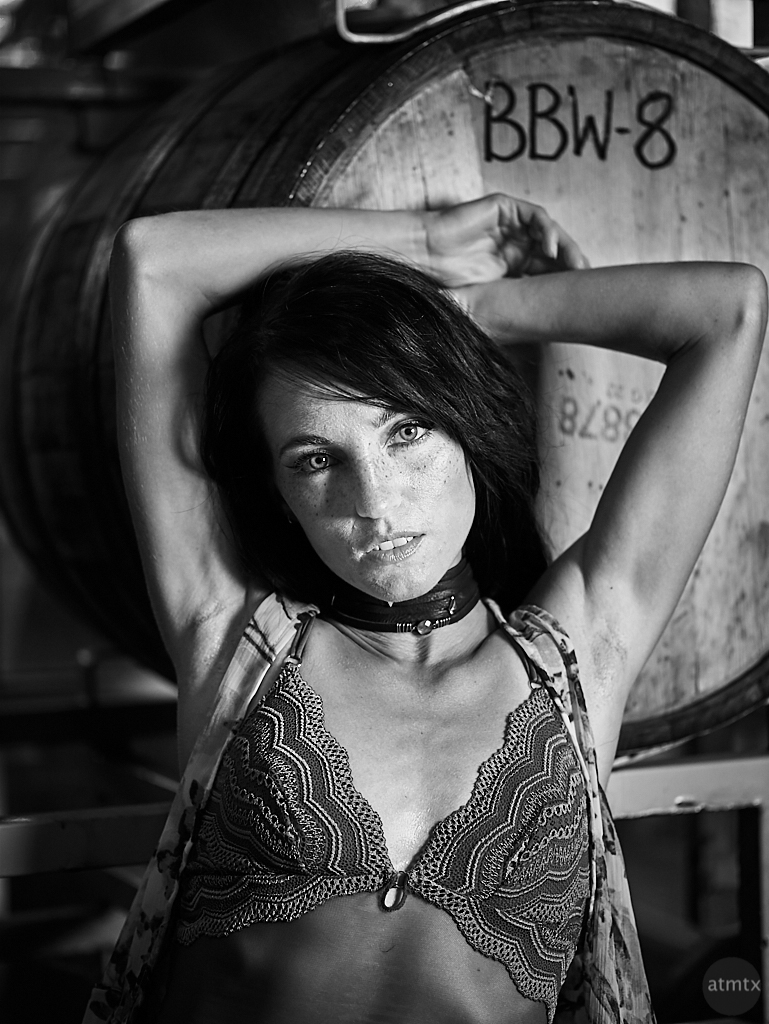 Back in August, Panasonic sponsored a Drink and Click in Austin. While Olympus started the vendor sponsored Drink and Click events, Panasonic has jumped in, in a really big way. This one was really large, with multiple cases of gear and lot of company reps to answer questions. It was a good opportunity for me to play with cameras from the other micro 4/3 company.

As you know, I most often shoot with Olympus, through I do own several Panasonic micro 4/3 lenses. In fact, most of my Drink and Click portraits were shot with the Panasonic Leica 25mm f1.4. While Panasonic brought loads of G9 cameras, their big SLR styled flagship, I opted for a smaller setup. I shoot micro 4/3 for their compact form factor and really enjoy the mid-sized Olympus PEN-F and OM-D E-M5 Mark II. I wanted something similar.

Unfortunately, the then newly announced GX9 was in short supply, so I opted for the less expensive and older GX85. The GX85, introduced in 2016, shortly after the PEN-F, has a similar range finder like style. I coupled it with the Panasonic Leica 42.5mm f1.2. Ironically, the lens is nearly three times as expensive as the camera, but more on that later.

Each camera company has their own feel, and despite Olympus and Panasonic both making micro 4/3 cameras, the two are very different. In the range finder like form factor, Panasonic and Olympus do not have models that directly compete against each other. The GX85, for example, is considerably less expensive. The PEN-F is a significantly higher quality, premium camera.

Given the price and quality differences, it’s unfair to compare the cameras directly. The PEN-F feels a lot better and part of its appeal is its beautiful retro looks and crisp tactile controls. The EVF, while smaller, looks better. The unique film effects dial and the contrasty black and white simulation makes the PEN-F hard to beat.

However, on paper, the GX85 stacks up very well. And, it has a 4K video mode that the PEN-F lacks. The no-nonsense minimal black styling, consistent with many Panasonic models, is attractive. The Panasonic has pleasant to use controls and the user interface is logical and well thought out. Objectively, the Panasonic probably has an easier to understand menu system than Olympus. It also has a built-in flash, which can be useful in a pinch.

The biggest strength of the GX85, however, is its highly competitive price. Right now, as I write this, you can get a two lens kit with the 12-32mm and 45-150mm for $599. I wouldn’t be surprised if they offer even better deals as we approach the holidays. This is comparable in price to the DSLR kits offered by Canon and Nikon. And, I can definitely say, I rather buy a Panasonic GX85 kit over entry level systems from Canon or Nikon.

Some say you should spend your money on lenses and opt for more basic camera bodies. Cameras constantly improve and rapidly depreciate but good lenses maintain their value. The Panasonic Leica 42.5mm f1.2, which I used for today’s photo, is a classic 85mm equivalent, perfect for portraits. It is a fine lens with a fine price tag of $1600. While it’s a comparably large prime lens, it worked well on the compact GX85 and produced lovely photos. I shot this image in JPEG + RAW and post processed the black and white in Capture One.

Would I buy the camera? No, I already own the Olympus PEN-F, which is superior for my needs and I prefer the Olympus color over Panasonic. However, if you are on a budget and want to explore the superior ergonomics of mirrorless cameras (over DSLRs), the Panasonic GX85 kit is a great way to start. The two lens kit will serve you well. And, as you grow photographically, you can add other more specialized lenses. You can attach any Panasonic or Olympus micro 4/3 lens and together, they offer the largest selection of mirrorless lenses.

9 thoughts on “Playing with the Panasonic GX85”