Here’s Tessy, for my last Polaroid Portrait. I featured her two other times using very different cameras. Today, we have a colorful yet muted low-fi instant portrait. Earlier this week, a contrasty black and white print, made from a pure analog process. Finally, a portrait mode photo made on the iPhone 8 Plus.

The digital photo may seem the clearest and most realistic, but in reality none of the three truly captures the person. There are, after all, just two-dimensional representations created in three different variations. Photography is just a way to invoke an idea or memory in one’s brain and the most high-fidelity image is not necessarily the best for doing this.

It occurred to me that the two analog film photos have a translation problem. Though I did my best to scan the photos, neither looks as good as the original hard copy picture. On the other hand, the crisp and colorful digital photograph probably won’t print on paper as well as it looks on the glowing LCD screen. It seems that the analog and digital worlds have a barrier that degrades, when one attempts to transmute from one from to another. 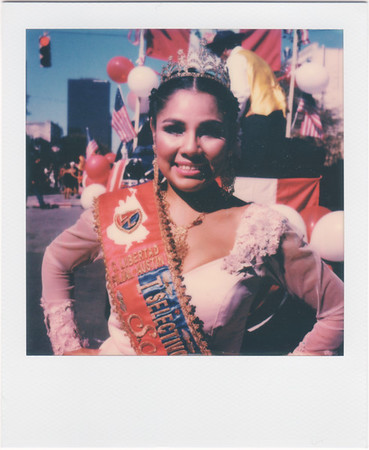 Tessy – Austin, Texas (in a closer to original size)

My favorite version is the Polaroid, shot on the 40-year-old SX-70. Though I did my best to capture the colors in the scan, the original has a subtlety that I have not duplicated. In addition, by posting a larger than life scan, in reality I degrade the apparent sharpness. Here’s smaller version in a size closer to the original 3 inch by 3 inch Polaroid print. Of course, you still have the disadvantage of not being able to see and hold the original.

Note: The Polaroid scan sizes will vary dramatically when viewed on different sized screens, and especially on your smartphone. The smaller scan, viewed on my 27″ iMac, nearly matches the actual Polaroid print.

Today’s post is also the last from this year’s Dia de los Muertos parade. It was hectic shooting with so many cameras this year, yet a worthwhile set of experiments in image capture. Digital is fast, easy and high quality. Yet, the more I do this, the more I’m compelled to explore other types of photography.