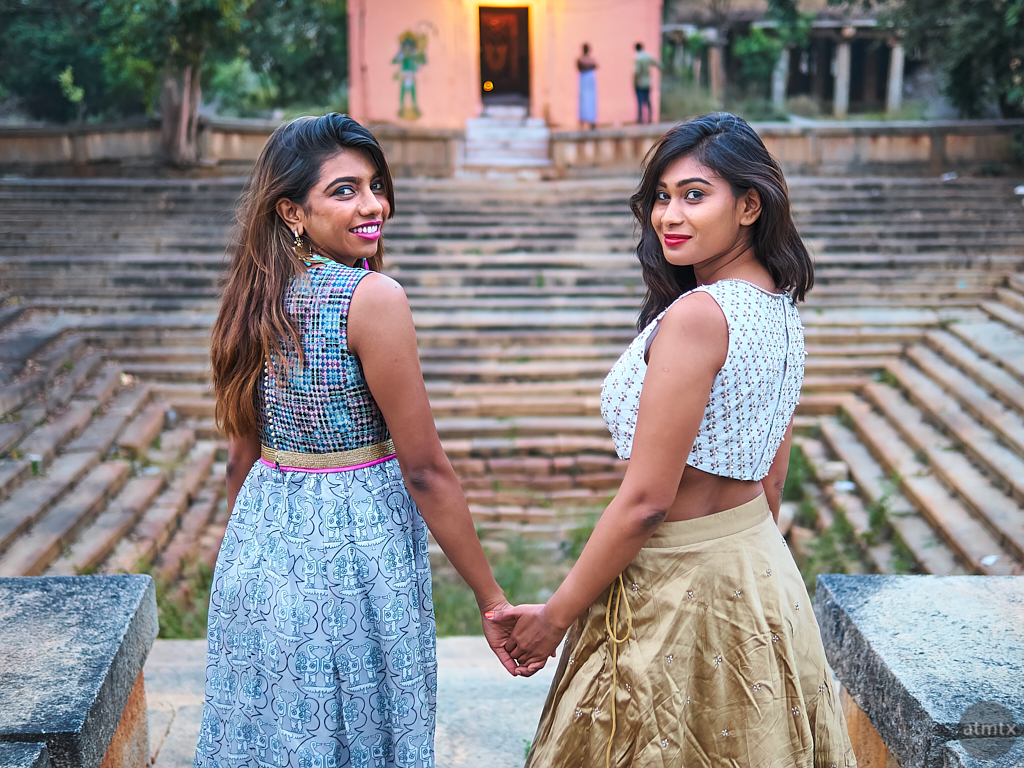 Sarika and Veena at the Temple – Bangalore, India

While I was busy shooting models at a colorful and sufficiently gritty doorway in yesterday’s post, a couple of my Indian friends found something on a grander and more unique scale. A temple, which I still think was active, but badly overgrown and probably under underutilized. Though there wasn’t any visible damage, it was of sufficient age and well-worn that it looked somewhat like an ancient ruin. At least that sounds more dramatic. While I think I made the best portraits at the colorful doorway, how can it complete with an ancient temple.

All my previous locations didn’t scream India. Sure, the models and their outfits certainly didn’t look run-of-the-mill American, but there wasn’t anything truly special about the locations that we used, until today. This was going to be good. Except, I had a big problem. The light levels were dropping fast. And, we didn’t have any supplemental lights. Natural light is always nice until there is no more.

I managed to make satisfactory portraits. I would’ve loved to spend hours at this temple; there was that much potential. I made the best of the situation. 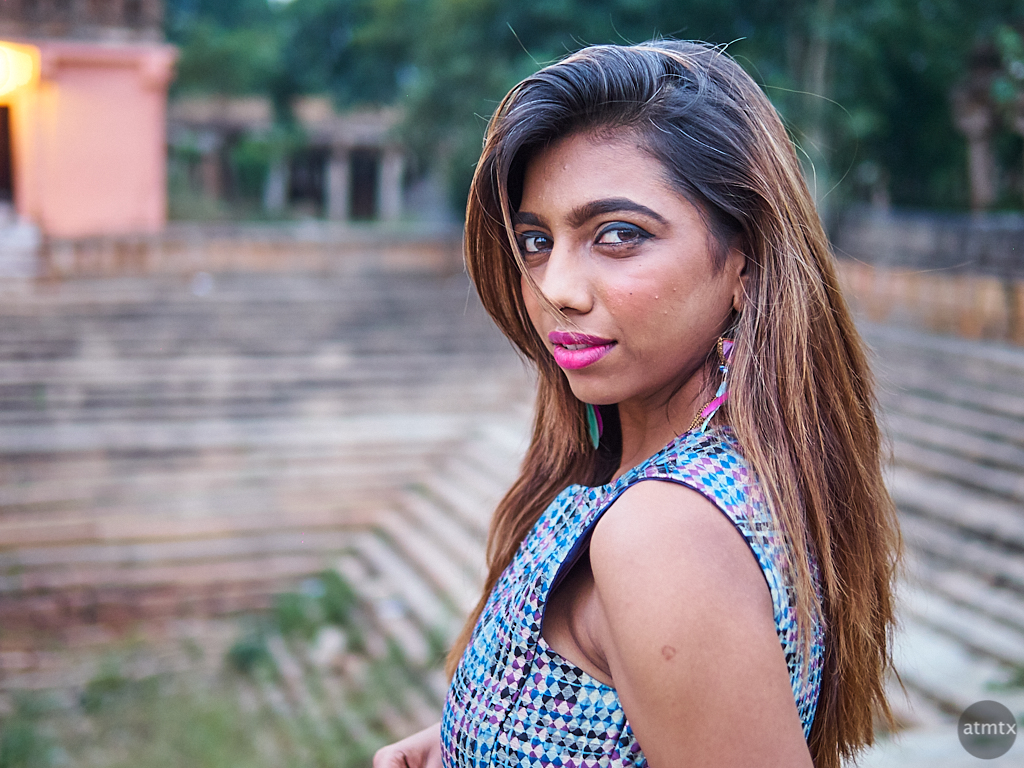 Have I mentioned that I don’t consider myself a portrait photographer? A rather strange statement, I know, especially since this is the fifth post in a row that features models that I photographed in India. Yes, sure, I do make photographs of people. And, who wouldn’t love making portraits of beautiful people in exotic locations. But, this is something I don’t do very often. At most, I make black and white portraits during Drink and Clicks, a social photography event, in Austin, Texas. Fun to be sure, but very different from what I’m doing here.

If anything, I shoot the most people on the street via traditional street photography or candid street portraits. I’m not very experienced in posing people, for example. Though I’m slowly improving.

I mentioned a few times that Saran, a professional photographer in India, arranged this afternoon shoot and invited the models. He let me do my own thing except for this particular photograph. His ability to place and pose the models helped immensely. Because the truth is, I would’ve never been able to set up a shot like this. I did opt for a serious look, because I’m trying to move away from those big smiley expressions. 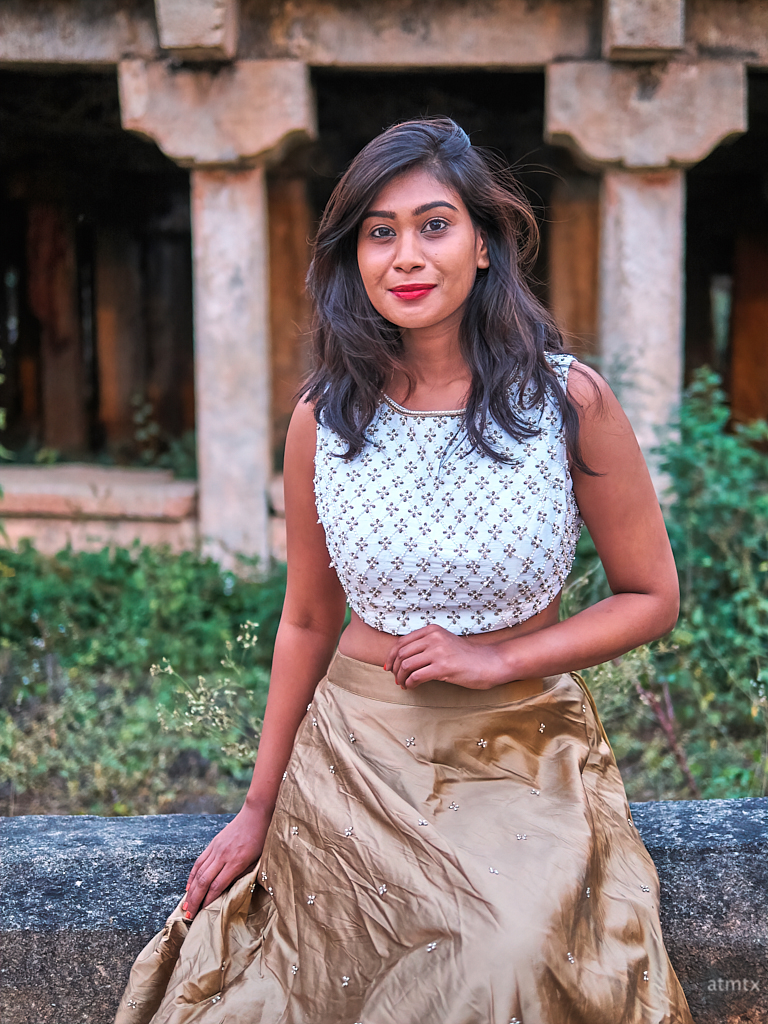 I was able to shoot Sarika and Veena before the light got too anemic. Clearly the stone architecture is of another world. You don’t see buildings like this in the US.

What you may not realize is that I was already shooting at a very slow shutter speed. Starting at 1/40 of a second and dropping down to 1/15 of a second. I went up to ISO 1000 to keep a decent image quality and my lens was a f1.4 or f1.6. Yes, it was getting dark, fast. I think, all considered, the photos look decent, though a little muddier and flat.

I suppose a camera with a larger sensor may have eked a a few more minutes of shooting. On the other hand, you won’t be shooting most cameras at 1/15th of a second either. So, I didn’t feel too bad about the low light capabilities of my Olympus. With all my night shooting at Drink and Clicks, I’m actually very comfortable making portraits in low light. The only difference is, I usually feature those portraits in black and white.

Don’t worry though. Those black and white portraits, that has become my signature, are coming in a future post.

One thought on “A Temple as a Backdrop”