Yesterday, we found a derelict backdrop that we were hoping for. An old building that would create a contrasting background to modern, beautiful models posing curiously in front of them. Across the street, purely by chance, another building with even more promise. Still in use but rundown and covered in glorious, colorful graffiti.

The building was part of a compound with old cars. Maybe they fixed cars; a mechanic or something. I wasn’t sure. I did like the building, however. Not the entire structure, but the doorway. It would form another worthy backdrop, one with contrast but in a different way.

My Indian friends asked the older group of men about borrowing their doorway for a photo shoot. They agreed. They looked harmless enough but I would’ve never asked if I were there alone. Our little entourage numbered eight including myself. The three models, of course, and four guys, who were native to India and most of them were a lot larger than me. It certainly helps to have local friends familiar with the area.

I got to shoot in several locations but this is may be my favorite. Not because it was the most exotic, which you’ll see in tomorrow’s post, but because it was different and unexpected. Seen from a far, one would never expect to create portraits like this. I chalk this up to luck, being open to possibilities and a touch of experience. They all work together to create my favorite portraits of the afternoon. 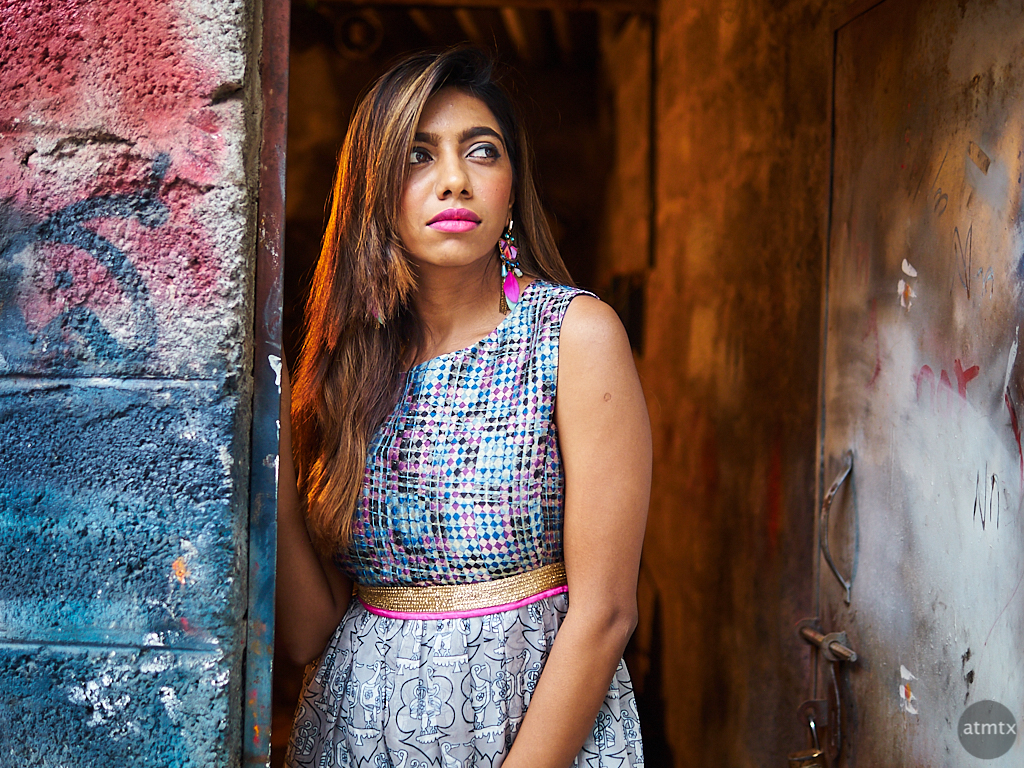 There was an odd object hanging under the doorway. Was it a talisman for luck? Or was a protection from evil? I don’t know. Unfortunately, it distracted from the framing. Of course, I didn’t want to disturb it; I was thankful that they let us use the building. I got the models to scrunch down, or in this case for Sarika, I cropped it out.

The warm interior light which acted as a hair light was a lucky bonus. A single work light dimly lit the interior and it wonderfully color contrasted with the cooler, bluer exterior.

As with most of my portraits and the ones from this series, I shot with a 50mm equivalent. No zoom lens, which I rarely use. For portraits and street photography, I like the smaller and more nimble prime lenses. My portrait technique is one of stepping in and out to change my framing as they change their poses. I find it faster and more natural than manipulating a zoom ring.

I’m not sure why I ended up shooting Priya against the wall, instead of the doorway. Perhaps just to change things up. I also photographed Priya inside the building, but the single light proved too harsh and the cluttered interior didn’t work.

Unknown to me, a couple of guys in our group were out scouting, while I continued to make portraits. They found an amazing place and much more in keeping with India. We rushed there as the light began to dim. It was the most dramatic and exotic of the afternoon, which I’ll feature tomorrow.

2 thoughts on “A Doorway with Character”