I don’t often pixel peep, scrutinize the image at high magnification, especially once I buy the camera. I like to go out and just make pictures to see how they turn out. Shortly after I got my new (used) Olympus XZ-1, I went downtown for a quiet photowalk. I arrived at the Pfluger Pedestrian Bridge right at golden hour, about an hour before sunset, to document the rapidly changing downtown.

It’s been a while since I’ve been on the bridge and the Austin skyline is filling out nicely. I took all these photos from the bridge, all with the Olympus XZ-1, which is a premium point and shoot back from 2011. I believe the CCD imaging sensor, which is no longer used in cameras, imparts very nice color different from the kind we get these days. 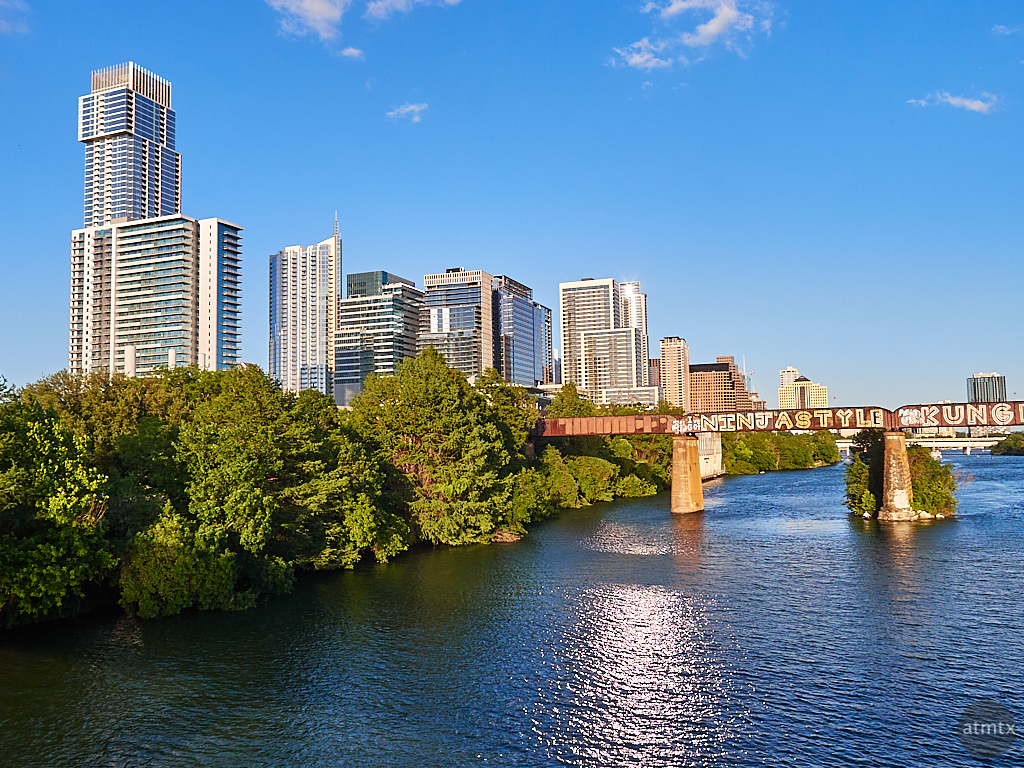 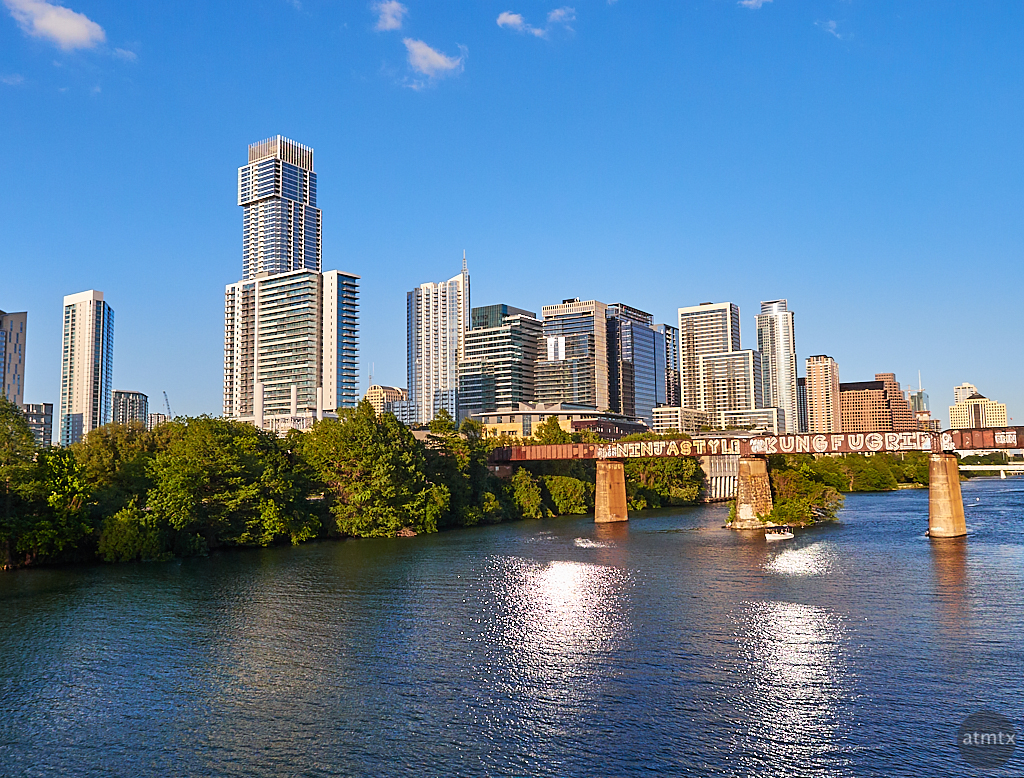 Both of these photos are at 6mm which gives a 28mm equivalent framing. The second picture looks wider but this is an illusion. I just shot the image from a different place further down the bridge.

Beyond the now unique CCD sensor, I think the optics on this camera are really good. Better than the one in the Canon G7X Mark II, which is my newest compact camera. DPReview’s review of the XZ-1 states that this is the first compact Olympus camera to sport a Zukio lens designation, which is reserved for their best lenses. With a zoom range equivalent from 28mm to 112mm, the maximum aperture goes from a fast f1.8 to a still fast f2.5 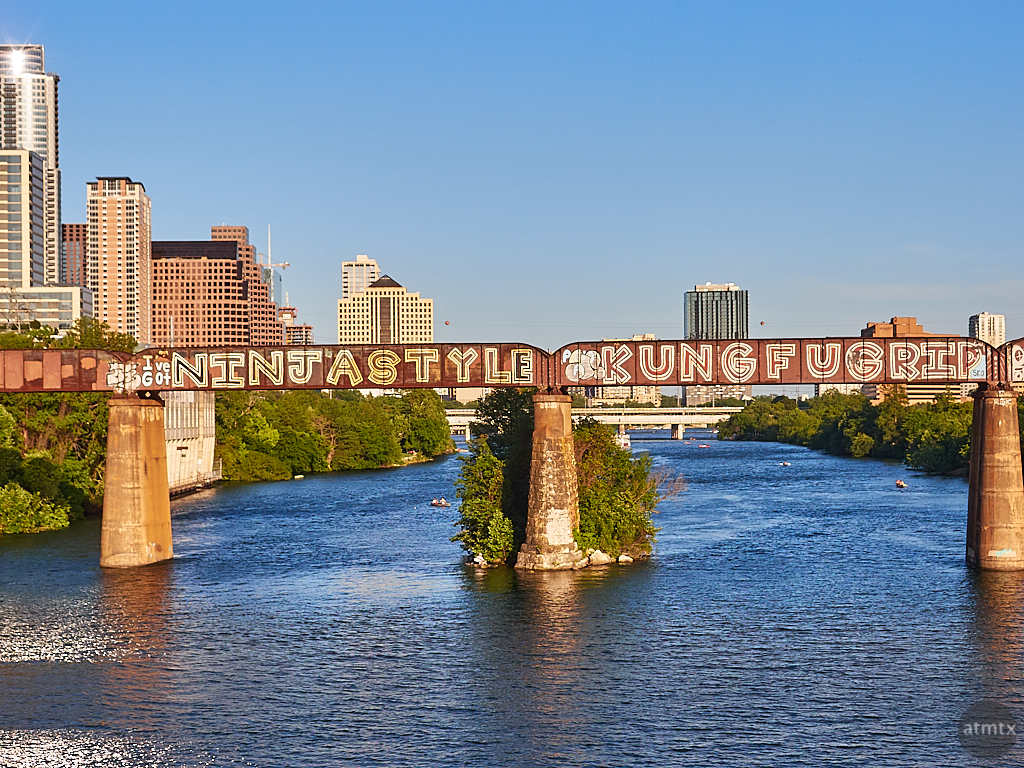 The top bridge photo is at a 60mm equivalent. I zoomed in to the maximum 112mm equivalent when the train came through. Even at its maximum zoom, the image is decently sharp.

I made these photos in shutter priority, which is usually the way I shoot these days, especially with cameras with a deep depth of field. But, in retrospect, I should have used Aperture Priority and selected the optimal aperture. All photos were made nearly wide-open, with its biggest aperture, which is usually not the sharpest setting on the lens. Even so, I’m really happy with the optical quality.

Even on a compact camera with a small sensor, I was surprised that I got a little bit of background blurring. Shot at 15.3mm at f2.8 which gives a 71mm equivalent at f13 in full frame terms.

Generally, I like the ISO performance up to 200 on this camera. But in reality, ISO performance is a bit more complicated. In good light and properly exposed, higher ISOs can look good. This photo is at ISO 320.

Noise is most evident in darker parts of photos, especially when underexposed areas are recovered in post-processing. This is true for any digital camera. These earlier CCD cameras are noisier than modern versions, but I really like the colors. And, while it’s only 10MP, it’s more than enough for most uses, especially for web-based viewing.

Incidentally, I shoot all my XZ-1 photos in RAW and post-process them in Capture One.

I’m really happy with these photos and I think it shows how good an eight-year-old camera can be, especially in good light. Unlike yesterday’s Eeyore’s photos which I made under harsh mid-day sun, late afternoon is fantastic — warm and softer. They don’t call it golden hour for nothing.