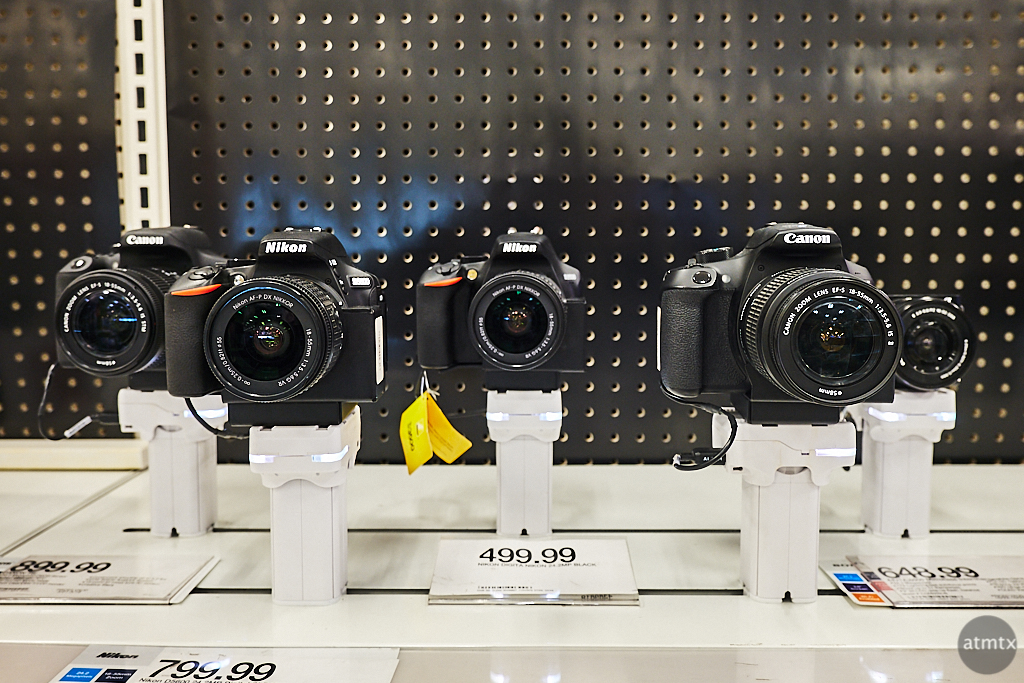 These big-box retailers are not what you call cutting edge. On the other hand, they probably have a good pulse on the tastes and needs of the average shopper. Even though we have a spectacular camera store in Austin, Precision Camera, of course, some will opt to get a camera at these mass-market resellers. For the increasingly diminishing few who want to step up from a smartphone camera, they probably think Canon or Nikon DSLR. Too bad because these DSLRs make the least sense.

In Target’s defense, they did add a Sony mirrorless to their display, partially hidden on the right side. If you move up to an electronics specialty store like Best Buy, you get some more choices. Sony seems to be making inroads.

These DSLRs are old technology and hopelessly bulky. I can’t see most people using these for any length of time. For the smartphone generation, the initial excitement of a “serious” DSLR will give way to laziness. Carrying around such a camera is cumbersome, and they will rarely use it. It’s only for those special occasions, they’ll say. Of course, because they don’t practice with their DSLR, they will make subpar pictures. After a while, they’ll notice that their smartphone pictures look better, and will declare them good enough. I’m sure a large number of these cameras sit in closets.

A smaller mirrorless camera will help, though most of these will ultimately go unused, too, unfortunately. I’m not talking about photo enthusiasts like you and I. We live to take pictures and talk about gear. But, for the folks who buy at Target, not so much. The continuously advancing smartphone cameras will improve quicker than their photographic skills. And, skills via continued practice is what you need to make good photos with these DSLRs and mirrorless cameras. Who needs skills when you have artificial intelligence automatically fixing all your mistakes.

10 thoughts on “Serious Cameras for the Masses”