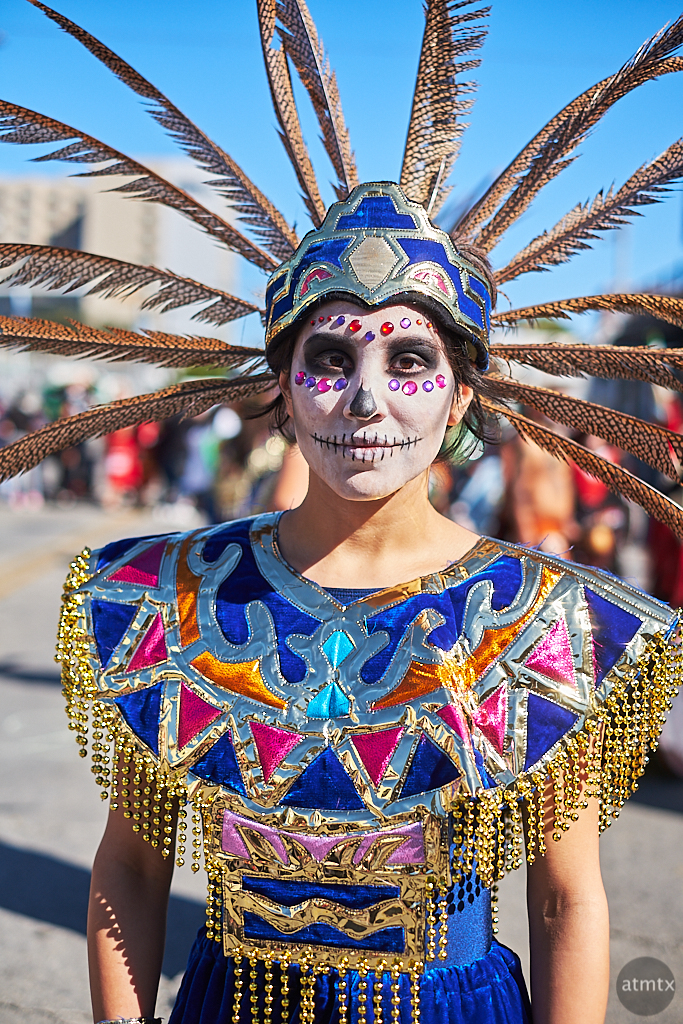 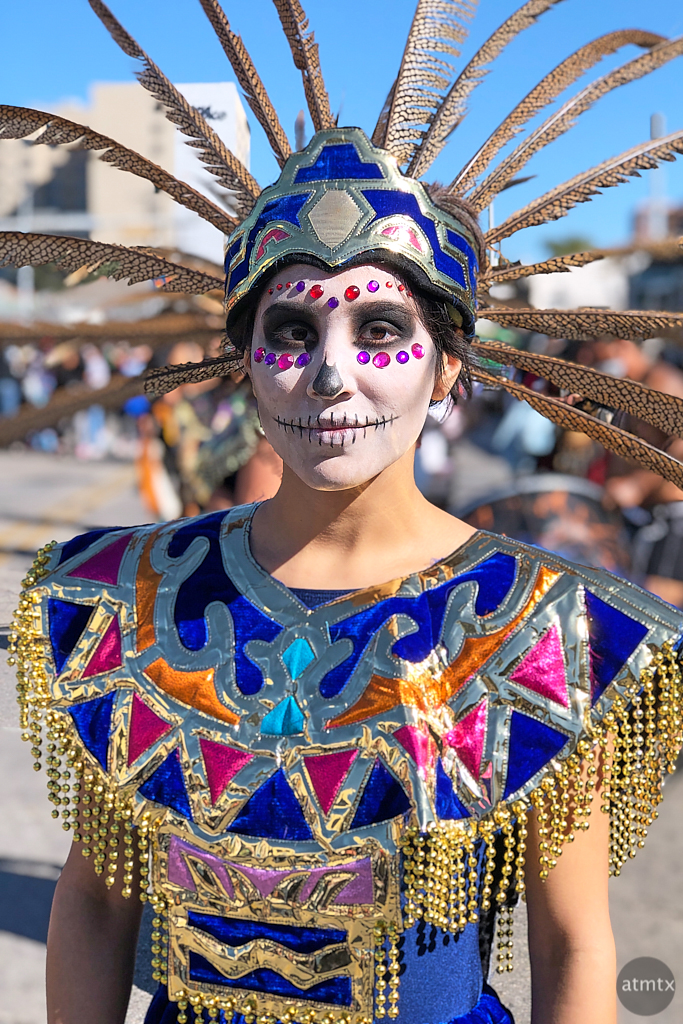 When I was down at the Dia de los Muertos parade a week ago, I snapped a portrait with my iPhone 8 Plus. The increasing capabilities of the iPhone camera were still fresh on my mind, after comparing the newest iPhone 11 Pro to the iPhone 8 Plus.

Using the portrait mode on the iPhone automatically switches to the 56mm equivalent lens, and does a simulated depth of field blurring via computational photography. Then, just for grins, I shot Sara with my Fujifilm X-A2 with the 35mm f1.4 lens. This combination yields a similar 52.5mm equivalent. I post-processed the Fujifilm RAW and the iPhone JPEG to conform to my taste and to make them look as similar as possible. You can see the results above. Though Sara had moved slightly, I took the Fuji photo right after the iPhone photo. Let compare the results.

At a quick glance and without scrutinizing, the two look remarkably similar. It really shows how impressive the iPhone is, even my two-year-old model. In good light, as we have here, both produced excellent images. It’s no wonder so many people use their smartphones now as their only camera. But, if you analyze the photos, you see some interesting differences.

First, there are some computational errors with the feathers, especially on the left side. This is a decidedly tricky image to process, and I didn’t even catch the issues at first glance. Also, the iPhone has slightly blurred Sara’s outfit. Only her face is truly in tack-sharp focus. Quite by coincidence, I made a portrait of Sara last year, in the same outfit. In that version, her outfit was sharp. I wonder if it has anything to do with the position of her arm?

With the Fujifilm, there’s no computation involved. The blurring is created via physics and optics. I actually ran into a limitation that wouldn’t affect the iPhone. Though I had an f1.4 capable lens, I could only shoot at f2 because I was limited by the maximum shutter speed of 1/4000 per second. To shoot at f1.4, I would have needed a 1/8000 per second shutter, which this camera could not do.

Beyond the computational issue with the feathers, I prefer the Fuji image for its color and sharpness. But, this is a judgment based solely on technical image quality. The iPhone did so well that ultimately what matters more is the subject and composition. But how about post-processing? That’s something you might not think about. Take a look at the original images below. 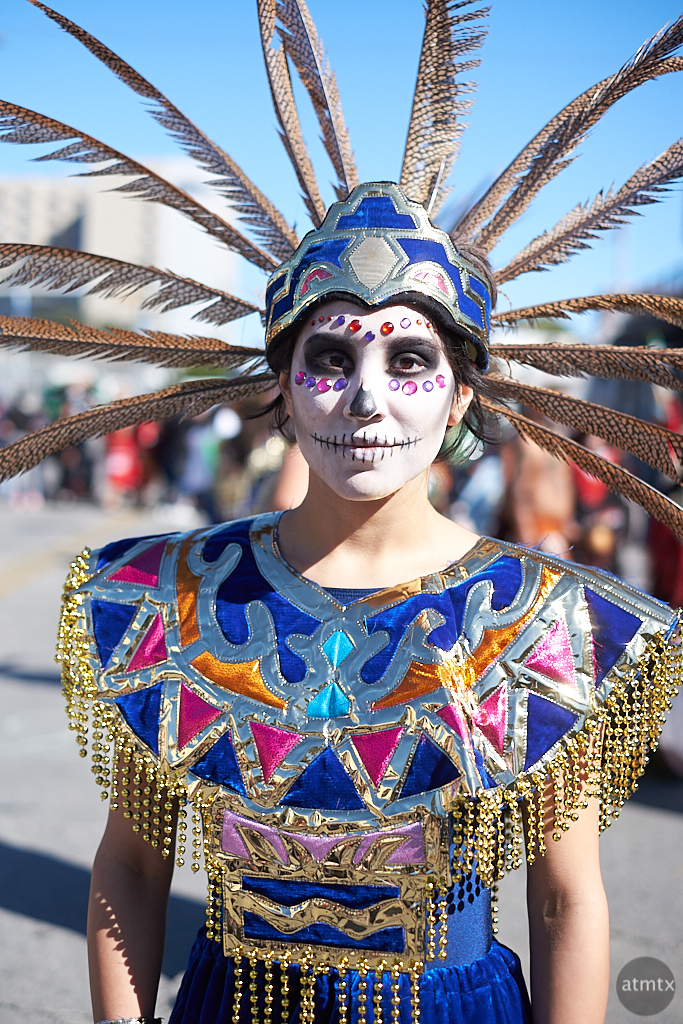 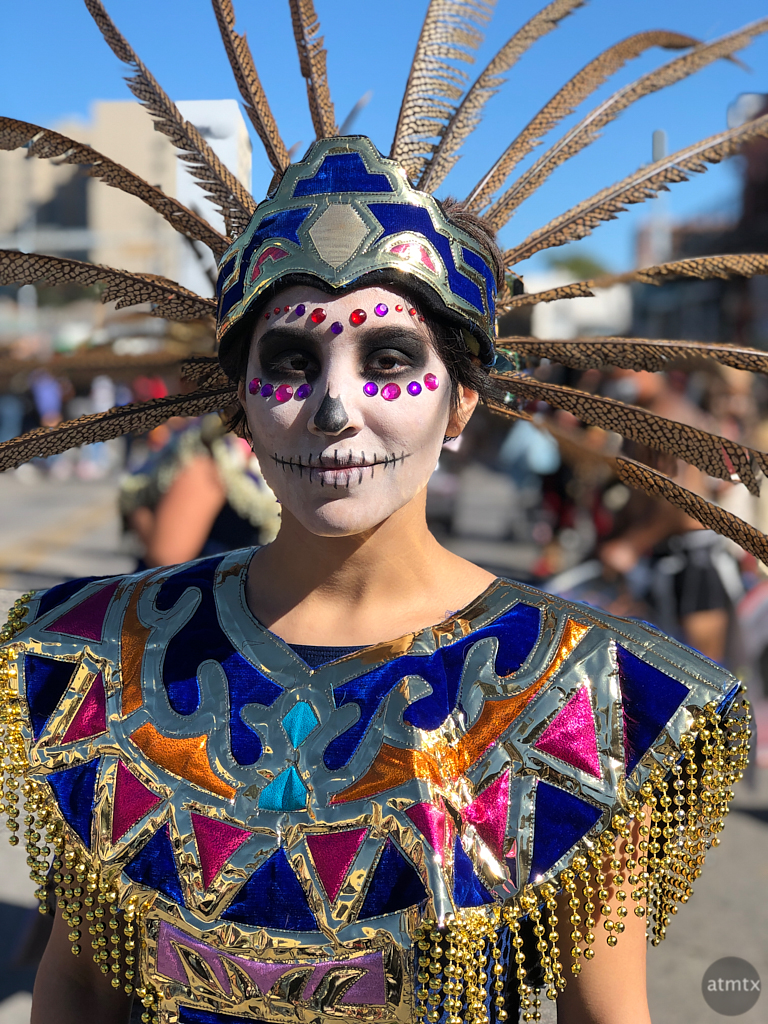 You can tell I made some dramatic post-processing changes. I use Capture One, which is a professional image processing tool, though there are many other worthy tools. And, despite what some say, post-processing does matter. That’s why I post-process nearly every image on this blog unless I explicitly mention that the picture is straight out of the camera.

My conclusion? It takes a fair amount of photography and post-processing skills to make outstanding photographs with a traditional camera. The iPhone makes it a lot easier both in the taking and even the post-processing. While it’s fine for enthusiasts like me to fiddle around with dedicated cameras, I know most people rather capture and go. A quick social media post or a text of an image to a friend is what they care about. I’m decidedly old school. No texting and no social media posting. I meticulously post-process my photographs and selectively talk about them on my blog.

I suppose it’s quaint. But perhaps it’s my way of slowing down, optimizing for quality, and thumbing my nose at the relentless desire for speed. I just don’t understand the need for frenetic chatter.

9 thoughts on “Comparing iPhone and Fujifilm Depth of Field”