When we last left India (on the blog) two months ago, I just finished a set of photos featuring street photography and architecture from Chamundeshwari Temple in Mysore. It was the perfect time for lunch, and my driver took me to Lalitha Mahal, a palace turned hotel, located nearby. The food was great, but the architecture and opportunity for photos made the visit even more worthwhile.

The palace was built in 1921 by the Maharaja of Mysore for the Viceroy of India, who was the British ruler of colonial India. It was converted into a hotel in 1974. This was the grand ballroom, which is now the hotel restaurant.

As I recall, it was already around 12:30 when the restaurant just opened. I was ready to eat earlier, but I noticed that Indians tend to take their lunches later. I imagine around 2:30 to 3:00, this place will be hopping. Luckily, I was the first one in, and it gave me a chance to make a clean people-less architectural photograph.

This post wasn’t meant to be a comparison of cameras, but I found this second very similar photograph I made with my Canon G7X Mark II. At a 24mm equivalent, it’s noticeably wider than the 28mm equivalent with my Olympus OM-D E-M5 Mark II, up top.

More interesting, however, is the difference in color. I did post-process both RAW photos but kept the colors unchanged. You can see how different the colors are from both cameras. I don’t remember which is a more faithful rendition, but I suppose that doesn’t matter. I personally prefer the lighter and airier Olympus version. 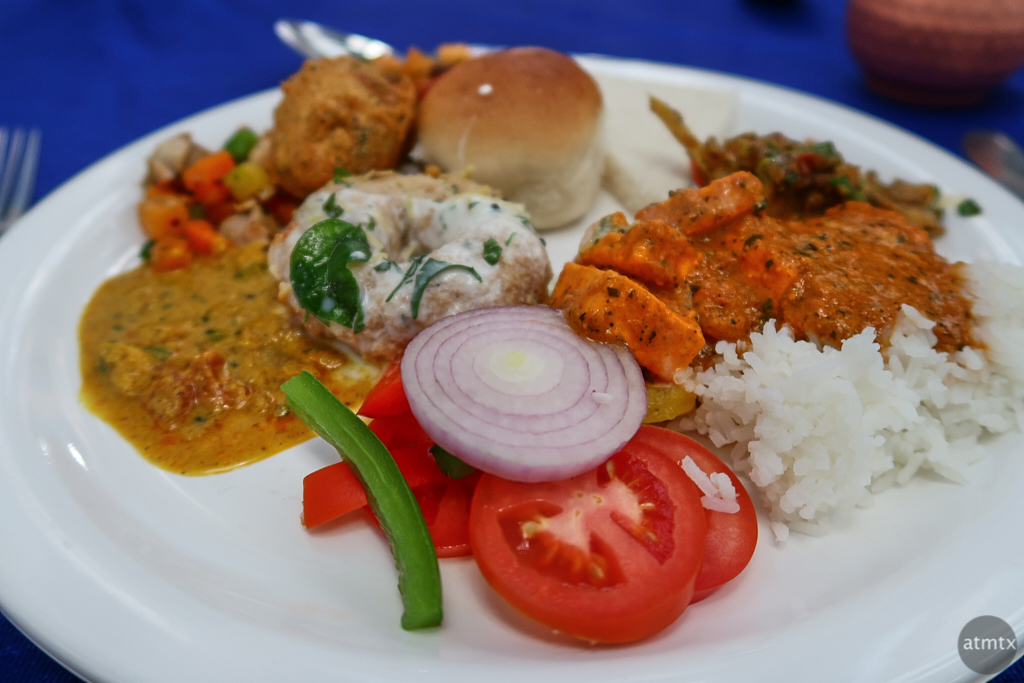 Embarrassingly, I’m going to admit that I often take pictures of my food, though I’m sure you’re glad that I rarely post them.

I wasn’t very intimidated by Indian food. I often went to buffets and sampled nearly everything without knowing what it was. A big reason was that most of the food was vegetarian with the occasional chicken or seafood. There was no meat from mystery parts of mystery animals. I ate entirely too much, however, but enjoyed it immensely.

One thought on “A Grand Lunch”