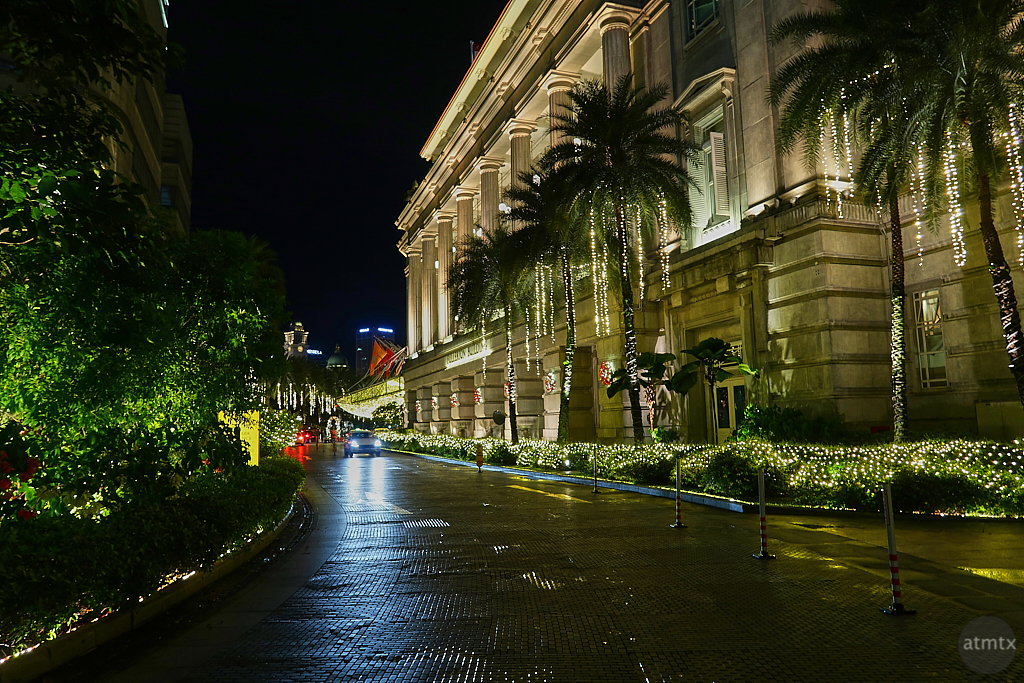 As I was headed towards the bay, I stopped at the Fullerton, a lovely 5-star hotel. Built in 1924, it started life as an office building. Until it was extensively renovated into a hotel in 2000. It stands prominently near the water and is a counterpoint to the modern towering skyscrapers nearby.

I’ve been inside on my past trips, but I was rewarded this time with a splendid Christmas tree. It was my favorite tree from this December 2018 trip through India and Singapore. It’s the featured image on this Christmas tree post.

Here’s another view of the interior with its mix of old and new.

I made both photographs with the Canon G7X Mark II compact camera. The small, black, point and shoot looking camera is unobtrusive enough to use almost anywhere. With good technique, it’s capable of making good photos in nearly any situation. However, I’m really not happy with the RAW images it produces. And, the more that I’ve used it, the deficiencies of the RAWs increasingly irritate. On the other hand, the JPEGs look great for the most part.

From what I can figure out, the camera does extensive post-processing to create the JPEGs — particularly for correcting lens distortion and image sharpening. That’s why the JPEGs look sharp with limited distortion. Unfortunately, Capture One’s algorithms can’t match what Canon does in-camera. So, perhaps, this is a limitation with Capture One. But, I’m guessing that the situation is similar with other RAW converters.

Nobody knows more about the limitations of the lens than Canon, and they do a lot in-camera to correct for them. JPEGs, however, are not ideal for post-processing, and that’s why I shoot in RAW. But, ultimately, I’m coming to the conclusion that I shoot use the G7X Mark II as primary a JPEG camera. In most cases, I can make better pictures starting with JPEGs.

That’s the case with both of today’s photos. Even with the JPEG, I was able to recover enough detail in the first photo to make it worthwhile.