What am I doing comparing a Canon G1X Mark II, a 12MP 2014 compact camera, to a Fujifilm GFX 50R, a still current 51MP medium format camera released in 2018? Crazy right? Well maybe. But take a look at what I found during this quick test in Georgetown. I wasn’t planning a direct camera comparison. After all, the two cameras are very different. But, I just happen to have a set of photographs with nearly identical framing.

I like the Canon for its versatility in a small package. Despite being 6 years old and only 12MP, it does a fine job, especially with its 24-120mm built-in lens. All the pictures in yesterday’s Georgetown Photo Essay were made with the Canon.

The Fujifilm GFX 50R is a chunky camera. I had the smallest GF lens attached — a prime, non-zooming lens, with a 40mm equivalent. I like it for the ultimate in image quality and often shoot it on a tripod. I did, however, make these pictures handheld.

Obviously, the GFX has a far superior resolution. When viewed on my 27″ 5K iMac screen, the difference between the Fuji and Canon is like watching a 4K video vs. an HD video. Noticeable, certainly, but is it earth-shattering? Depending on how you view the images, the difference can be as stark as comparing 4K to DVD resolution. So it all depends on the size of the photographs and how they are being viewed. At these small web sizes, you barely notice a difference.

The big difference, however, is the automatic white balance and color from these two cameras. Each camera company has their own secret sauce when it comes to color. I shot both in RAW, so I can change the color afterward, as I did on the post-processed photos up top. If fact, I took the extra effort to make both as close to each other as possible. 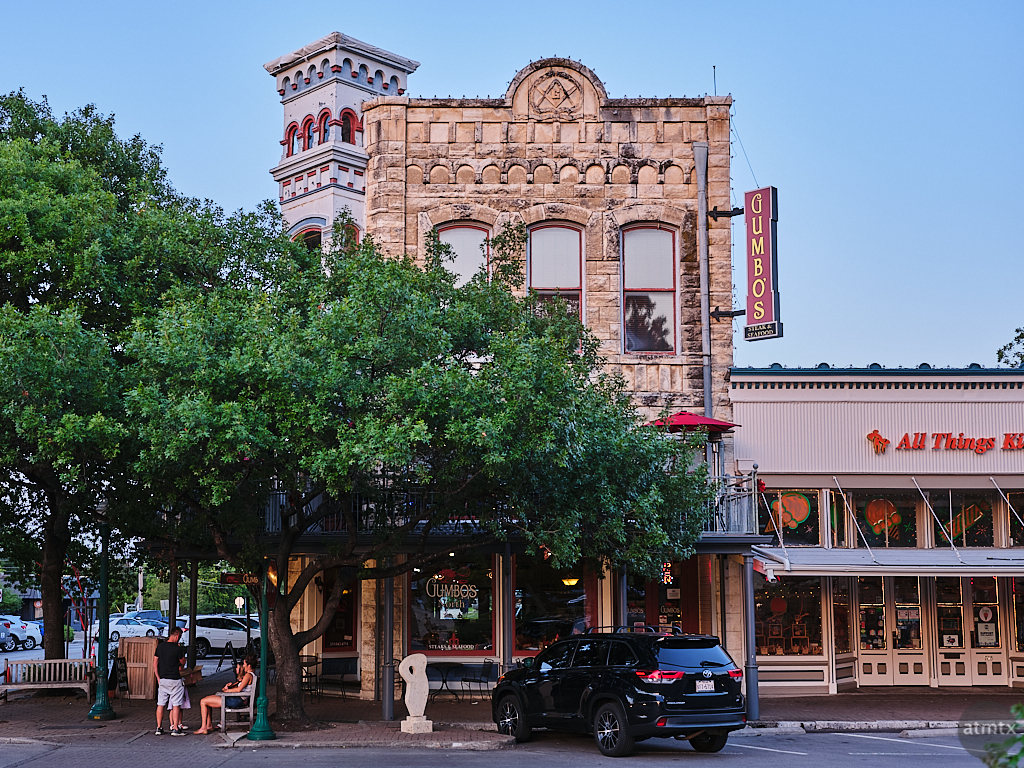 Here are the two photos with the color and saturation set to its defaults. Notice how much bluer the Fuji color is. I had the GFX set to its default PROVIA film simulation. But, the other (non-black and white) Fuji film simulations all had this bluish color. The Canon, by contrast, has a lot warmer rendition. This generally fits my impression of Fuji vs. Canon colors. I usually find Fuji’s to be cooler and Canon’s to be warmer.

With the risk of ruffling some Fuji fanboy feathers, I generally prefer Canon’s colors. I know that’s a very personal choice, and there is no correct setting. However, especially during the daytime, I like warmer. At night, however, I find the Canon colors to be too warm, and Fuji’s become more attractive.

Of course, when you shoot in RAW, you get to tweak colors, as I did above. I think you will agree that I closely matched the colors in the first set of pictures. But, overall, I was closer to Canon’s colors. It took me less effort to post-process the Canon pictures to get them the way I like them. After this little experiment, I’ve resorted to warming the Fuji colors considerably. It’s ironic that this 6-year-old Canon compact now guides my Fuji GFX post-processing formula.

The Fujifilm GFX 50R has other strengths. It has incredible dynamic range to lighten dark areas and recover highlights, as you can see from this photo. This little Canon can’t do that, and I even doubt the newest full-frame Canon R5 will match the Fuji GFX. And, if you want to have super sharp and detailed photos — to print large — the GFX 50R is your camera. But, in these ordinary, non-challenging conditions, this Canon G1X Mark II does a stellar job.