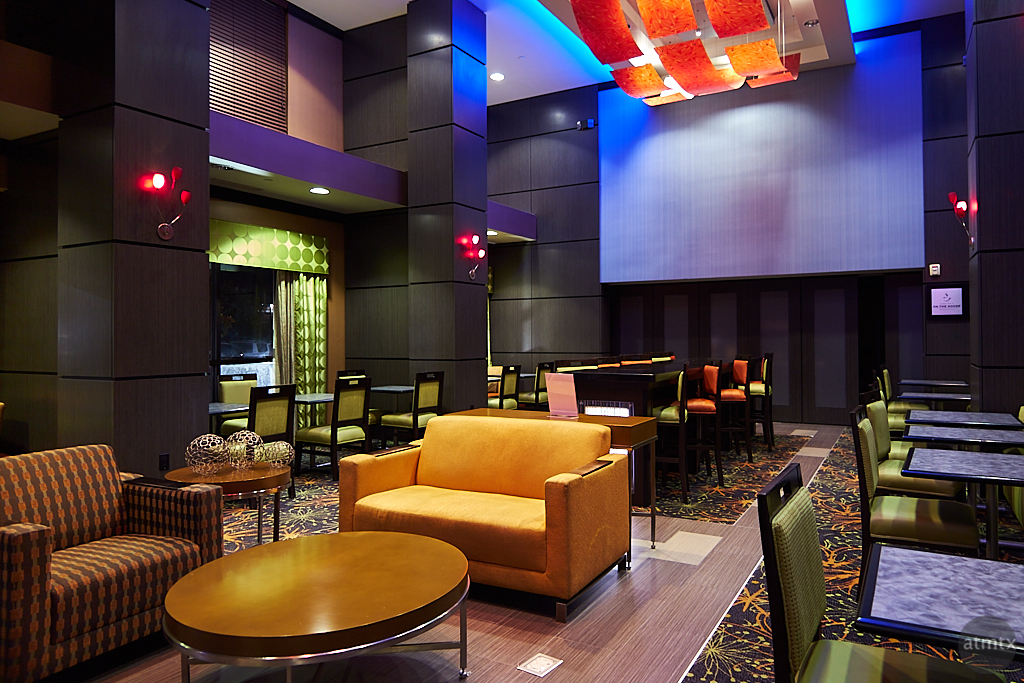 I mentioned yesterday that I brought two cameras with me on my trip to Tulsa, Oklahoma — the Canon G1X Mark II and the new to me Fujifilm X-E3. I’ve had the Canon since May, so I have a good idea of its capabilities. However, I was still shaking out the X-E3 to see how well it worked. I thought a quick test of both would be worthwhile to see their relative strengths.

In these two sets of photos, I made both images as I would usually shoot them. Therefore, I was not attempting to match the exposure settings. It’s a real-world test of how these two cameras matched up image quality-wise. I also post-processed the photos to my taste. But also tried to match the color, exposure, and framing as much as possible.

For the colorful lobby, I preferred Fuji’s default unprocessed color. The Canon’s white balance was a little too cool. But, since I shot them both in RAW, I was able to pretty much match the colors. There are subtle differences, however. Fuji’s colors pop’s more, and the Canon has more contrast.

The default unprocessed color for both of these was similar. Since the Fuji has a smaller aperture, more of the scene is in focus. Also, the image is sharper. The significant color difference is in the reds.

Overall, there is no surprise that the Fuji X-E3 outperformed the Canon G1X Mark II. First, the Fuji has a larger APS-C sensor compared to the roughly micro 4/3 sized Canon sensor (The Canon sensor is slightly larger than micro 4/3). The image stabilization on the Fuji lens seemed better than Canon. Finally, the optics of even the kit Fuji 15-45mm seem superior.

The Fuji is also a newer, faster camera with an electronic viewfinder. You can also change lenses on the Fuji, so it’s clearly more versatile and is a step-up camera for enthusiasts and even pros.

In Canon’s favor is the articulating rear LCD for high, low, and selfie shots. It also has a longer 24mm to 120mm equivalent focal length. The lens also has a larger aperture with a slight advantage in shallow depth of field. While the lens can’t be changed, it handles most situations with that single lens. The G1X Mark II might be more convenient as a single do-everything vacation camera.

For anyone else, other than crazy enthusiasts like me, bringing one camera is more than enough. The images from both are close and would satisfy most everyone. For a slow-paced vacation like this, I suppose the Canon G1X Mark II was all that I needed. But, it was fun to test the new Fuji, and it has better image quality. If I needed to take pictures quickly, the superior handling and speed of the Fuji would be a welcome change over the Canon.