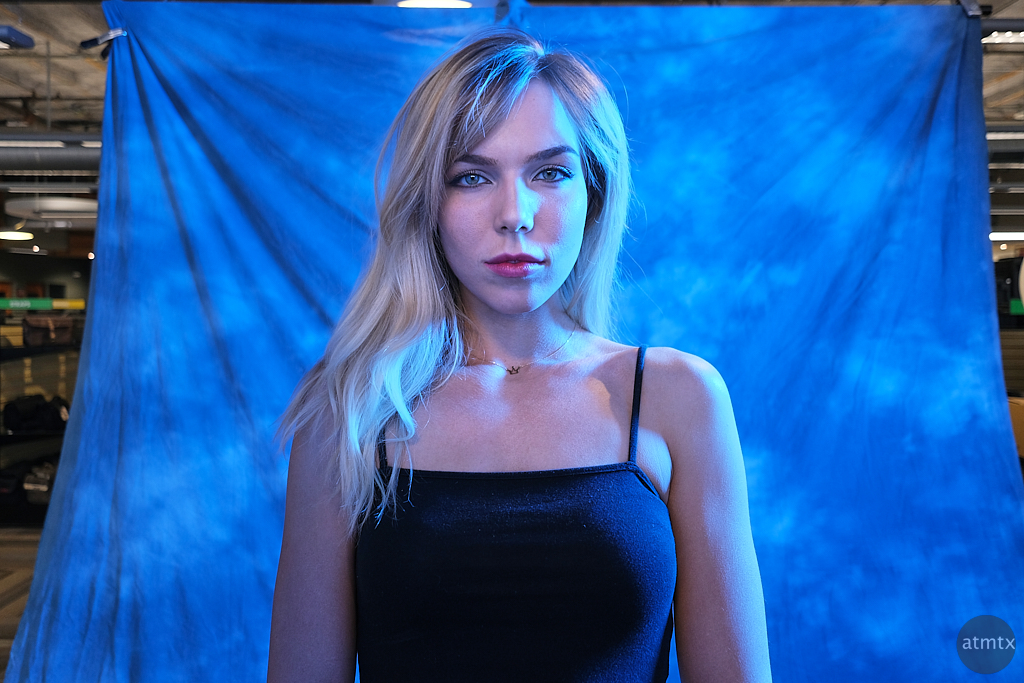 Before I get into the meat of the post, I have some disclaimers. The blue-ish light is not something I picked, as well as the 24mm equivalent focal length. Also, since these are JPEGs, the image quality is not as high as I liked under these tough lighting conditions. I’ll explain these points as part of the story. That said, I think the portraits are different enough to make them interesting. Especially compared to the rather traditional portraits from yesterday.

I attended a Fujifilm demo about 2 weeks ago at Precision Camera. It was primarily to showcase their brand new GFX 100S medium format camera. But, I was also interested in their new X-E4 and last year’s X-S10. All three cameras were released within the last half-year.

While the X-E4 is minimal and stylish, I was more curious about X-S10 but had some doubts. With its PSAM dial, it was the most un-Fuji-like higher-end X camera to date. It was already paired with the 16mm f2.8, which is a surprisingly fun and compact lens. Though, at a 24mm equivalent, it’s not what you call a traditional portrait lens. Nevertheless, Taylor-René more than happy to pose as I tested the combo.

Another customer, using the GFX 100S, decided to eschew the Profoto strobes. He wheeled in a LED light. Oddly, he seemed to like blue, which wouldn’t have been my first choice. But I didn’t mind. I was just playing with the X-S10 and not shooting it seriously. While I shot JPEG + RAW, I knew I would have to post-process the JPEGs since I didn’t have the RAW converter. I did the best I could with the JPEG to make them usable photos.

I took on the challenge of wide-angle portraits. While untraditional, it was a chance to get a bit more creative. In the first photo, I wanted to emphasize the wide-angle and shoot beyond the backdrop. I made sure Taylor-René was away from the edges to reduce distortion. Even so, wide-angle distortion is a factor. Since it adds more distance from near to far, certain parts of the body may look larger or smaller than usual. Telephotos are typically used for portraits, which compress features and tend to make more flattering representations.

In the second photo, I wanted to emphasize Taylor-René face. But also get most of the body in the frame. Notice how the head looks a lot larger than her body. However, since the head is away from the edges, her face seems comfortably normal. With a few of my photos, having her head closer to the top edge cause an elongated face. Though these days, with the advent of selfies, people have become more acclimated to facial distortions. Though they may not have realized it.

The X-S10’s fully adjustable rear LCD, which is not my favorite kind (I generally prefer tilting screens), was handy in the second photo. Taylor-René is taller than me, and I shot the camera above my head pointing down. The fully articulating LCD made framing easy.

There are other things I liked about the X-S10, which I will explain in tomorrow’s post. My apprehension about the X-S10 has significantly diminished.