It’s been nearly six months since I got my Canon 6D and have “gone full frame”. Has my world changed? Not really. But after a half a year’s use, I feel like I know the 6D well enough to make some comparisons. It may sound odd to compare a full frame DSLR to a smaller, mirrorless 4/3 camera, but stick with me. After all, they are both just cameras and the difference may not be as big as you think.

There are certainly obvious differences comparing a full frame sensor to a much smaller one. You have the potential for a lot shallower depth of field — the bigger the sensor, the shallower the depth of field. The big sensor collects more light so my low-light, high ISO images are a lot better with the Canon 6D compared to the Olympus E-PM2.

How much better is the low light performance? Well on the Olympus E-PM2, my newest Pen camera, I’m generally satisfied up to ISO 3200. On the 6D, I feel fine using ISO 8,000 to ISO 10,000. ISO 12,800 feels a bit grainy, depending on the situation. So I get about 2 stops of additional low-light performance. 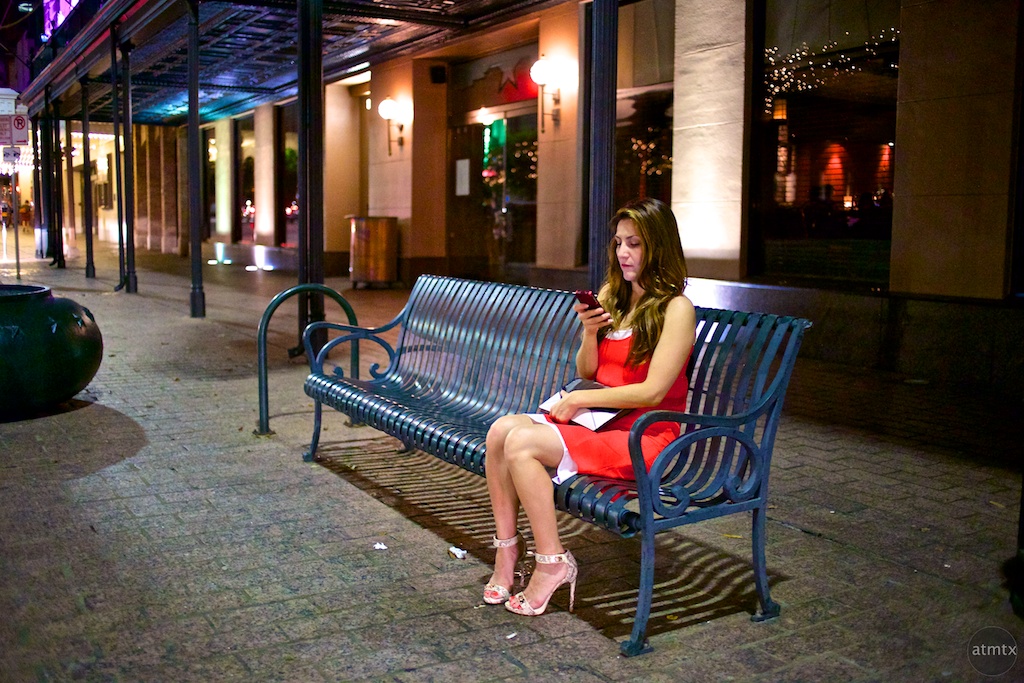 I also feel that the color on the 6D is a bit more vibrant. Not significantly so but when compared next to each other, there is a very slight difference. It almost comes down to a feeling more than something qualitative. Seen in isolation, there is nothing lacking in the Pen’s color performance. And comparing HDRs from both cameras, the color difference disappears. 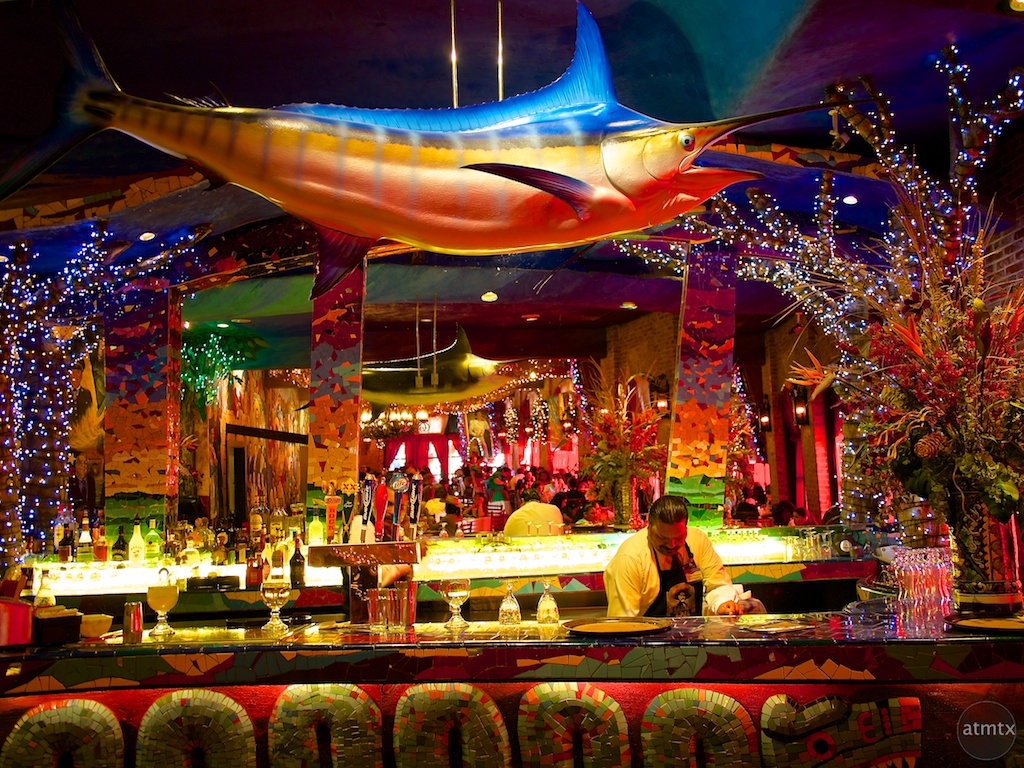 When viewed at 100%, I notice a bit more detail in the 6D. This is mostly likely due to the slightly higher resolution 20MP 6D vs 16MP on the Olympus.

Things that I expected to be better on the 6D, aren’t. That would include the dynamic range. The 6D nicely pulls out shadow detail but the highlights don’t recover very well, at least in Aperture 3. I find that, surprisingly, the E-PM2 does equally well for dynamic range. At times, it almost seems better. What also helps is that the Olympus consistently exposes a scene better that the 6D. I will talk about that in the next section. 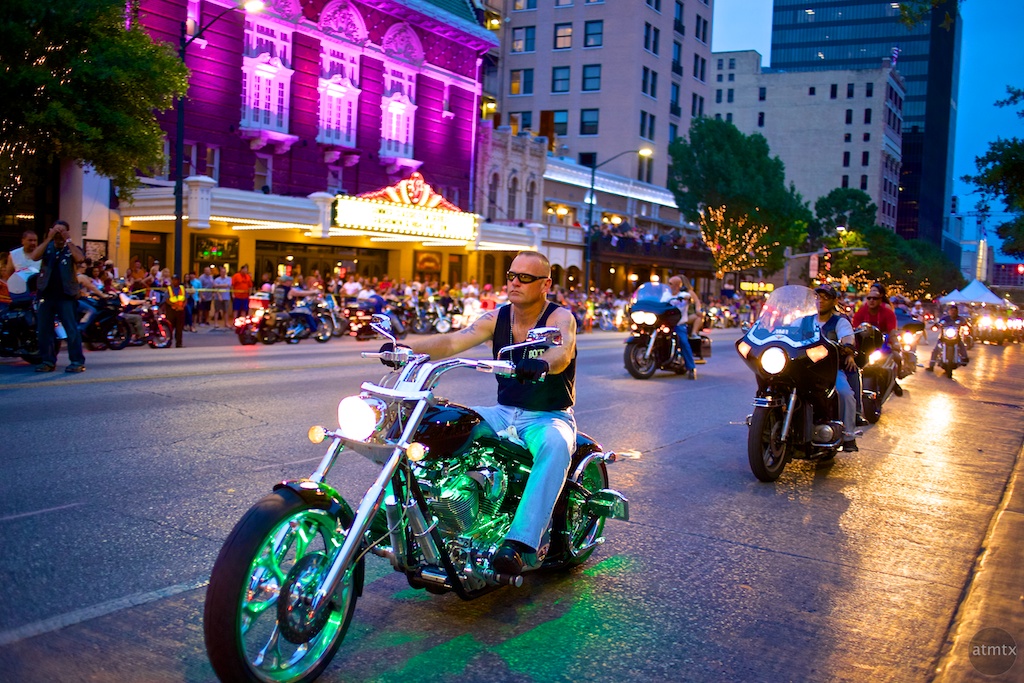 One of the biggest annoyances for me on the Canon 6D is its matrix metering. It generally seems to under expose, which I can easily compensate for, however, a small bright area in the frame can really throw off the metering. The exposure gets very dark. I have to add 1 or more stops to compensate. A good example is a photo from the ROT Rally parade. The headlights from the motorcycles really wreaked havoc with exposure. I needed to add + 1 1/3 stops to this image to have it come out reasonably.

The Olympus, on the other hand, handles these conditions a lot better. I rarely need to add more than a 1/3 of a stop possibly 2/3 in these cases. Take a look at the two photos below, taken at the same place. The Canon 6D is on the left and the Olympus E-PM2 on the right. The framing is slightly different since I used a 35mm on the 6D and a 28mm equivalent on the E-PM2. But they illustrate the behavior I get frequently. In fact, the Olympus has a -1/3 exposure compensation while the Canon has compensation upped by +1/3. You can see how dark the Canon is.

And it will be OK if I could just always add +2/3 or so of compensation consistently on the 6D, but that doesn’t work either. For even lighting, that would overexpose. I’m wondering if Canon added this behavior because it knows that the 6D doesn’t handle highlights very well. After all, I guess it’s better to preserve the highlights than get something that’s unrecoverable.

The bottom line is that with the Canon 6D, I either have to constantly adjust my shooting and/or I do a lot more post processing to have the images look the way I want. This takes some of the enjoyment away.

While the DSLR still has the edge, in general, over mirrorless in fast action sports shooting, for everything else, it no longer matters. At least on the Olympus, the single shot focusing is so fast that I no longer think that the DSLRs have an advantage. The 6D’s center point focusing sensor is more sensitive to lower light, which works better than the Olympus. However, I need to focus and recompose more often.

There is an obvious size difference between the two cameras. I prefer smaller cameras especially since I like to use small prime (non-zooming) lenses. For people using long telephotos (zooms or primes) the beefier grip on the 6D will work better. So the ergonomics will depend a lot on your hand size and attached lenses.

The entry-level E-PM2 has minimal controls but step up to the E-P5 or better yet the OM-D E-M1 and the available buttons and dials equals or bests the Canon 6D. 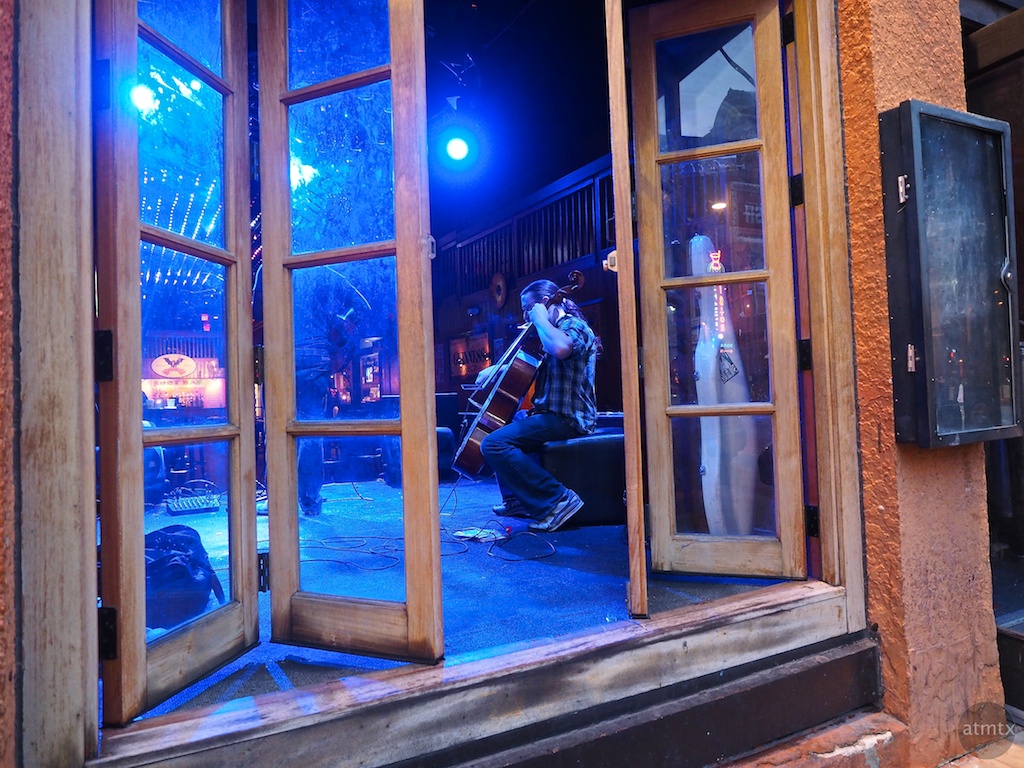 Of course for people carrying cameras for a long time, the attraction of mirrorless is the light weight and less bulk. The 4/3 sensor on the Olympus strikes a nice balance between image quality and body / lens size. What people often overlook is that a smaller sensor shrinks the lenses a lot more than the body. So it’s really the smaller lenses that are more significant.

What I enjoy the most, however, which I talked about earlier, is the difference in shooting style. With the old fashion DSLRs, you have to compose and shoot through the optical view finder. Then you need to look at a separate LCD screen to see if the image came out properly. If you are under controlled lighting, it’s less of an issue. Adjust your settings at the beginning and shoot away. However, if you are shooting on the street under changing conditions, the back LCD becomes more important.

With the mirrorless cameras, you compose either with an EVF (Electronic View Finder) or the back LCD. Either way, you get an exposure and color preview before you take the picture. See something you don’t like, you can adjust it before you take the shot. The active preview makes all the difference. This, more than even the light weight of mirrorless, makes me enjoy photography more.

I guess you can say I got spoiled by the mirrorless cameras or perhaps you can say I got lazier. The bottom line, however, is that I enjoy shooting the Olympus a lot more. The Canon 6D, in comparison, really feels primitive and so last century.

Sure the Canon 6D is capable of wonderful photographs, particularly at high ISOs. It’s really fun to do street photography at night, something that is hard to do with many other cameras. For somebody like me that likes the evening and night, this is a fantastic capability. And this is where I think the 6D excels. Given relatively even lighting at night, I can make images that I would be hard pressed to create with the Olympus. 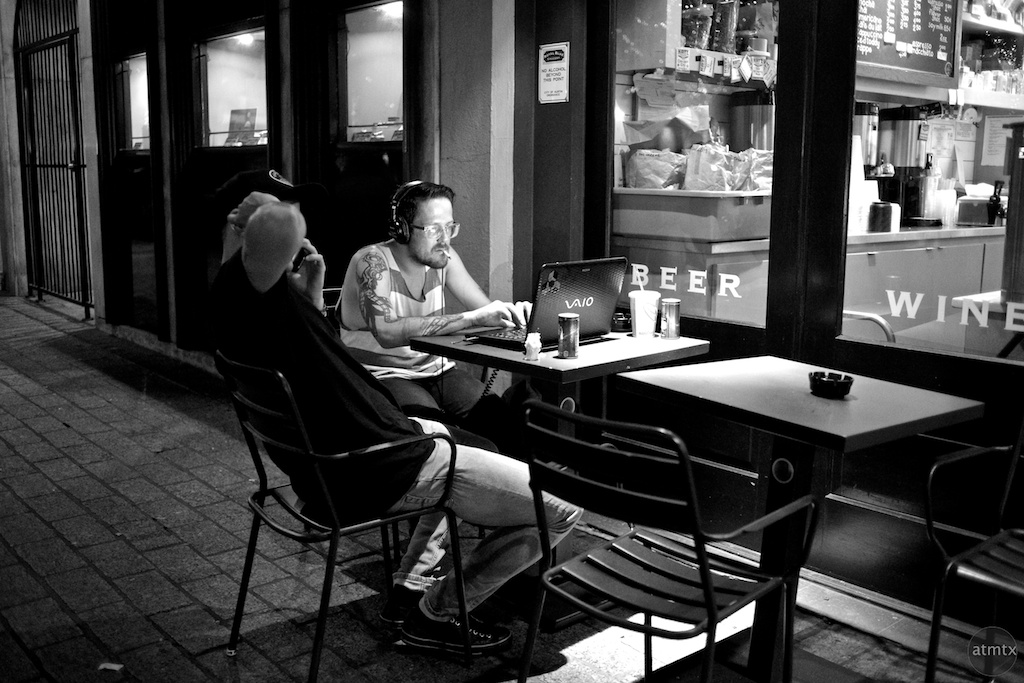 But the Olympus, surprisingly, is no slouch at night, especially if you are shooting things with less action. Freezing active people at night is a challenge but for still-lifes, the modern 4/3 sensor cameras come darn close. How is this possible? Well, the Olympus has in-body image stabilization which the 6D lacks. If I use the Panasonic Leica 25mm f1.4 (a 50mm equivalent) plus the image stabilization at ISO 3200, which can offset the nearly 2 stop advantage of the 6D. Consider too that optically the Panasonic Leica is superior to the Canon 50mm f1.4.

For most situations, I prefer using the E-PM2 or the other Olympus micro 4/3 over the Canon 6D. They’re smaller, lighter, more fun to shoot and gives excellent image quality (up to ISO 3200) with less fiddling during shooting and post production.

So when do I use the Canon 6D?

Whenever I get a new tool, it takes me a while to figure out how to best use it. I have no regrets selling my Canon 7D and replacing it with the 6D. I rarely touched my previous DSLR. The 6D, however, has several district uses. Here are the cases where it comes in handy.

1. Street shooting at night, as I mentioned earlier. With its great, high ISO performance, it allows me to make images that the Olympus won’t be able to match.

2. Portraits. When I want to get the maximum shallow depth of field to blur out distracting backgrounds, I’ll use the 6D. My Canon 70-200mm f4 IS or 85mm f1.8 are my preferred lenses.

3. Ultimate Detail. The 6D is my highest resolution camera. If I need to get the most detail for regular exposures as well as HDRs, the Canon will best the Olympus, though not by a huge margin. I guess I would need the 36MP Nikon D800 to get the ultimate in 35mm DSLR resolution (No, I have no plans of getting this camera, if you were wondering)

4. Sports. I no longer do much sports or fast action shooting, however, when I do, the 6D is what I will take.

5. Looking Pro. When I’m in a situation where “a pro” like camera is required, the 6D and its beefier lenses certainly makes me play the part better. Don’t laugh. People will judge you by your camera.

So that’s about it. For everything else, I would use the Olympus Pens. Which means that 80 – 90% of the time, I’m going mirrorless. 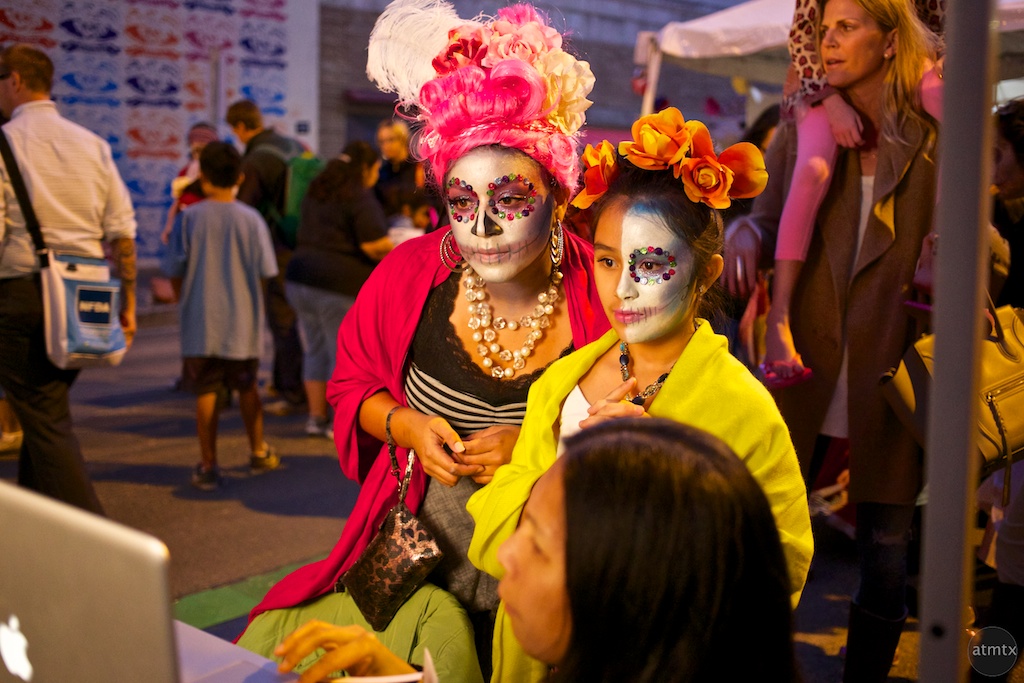 22 thoughts on “How does the Canon 6D compare with Olympus micro 4/3?”