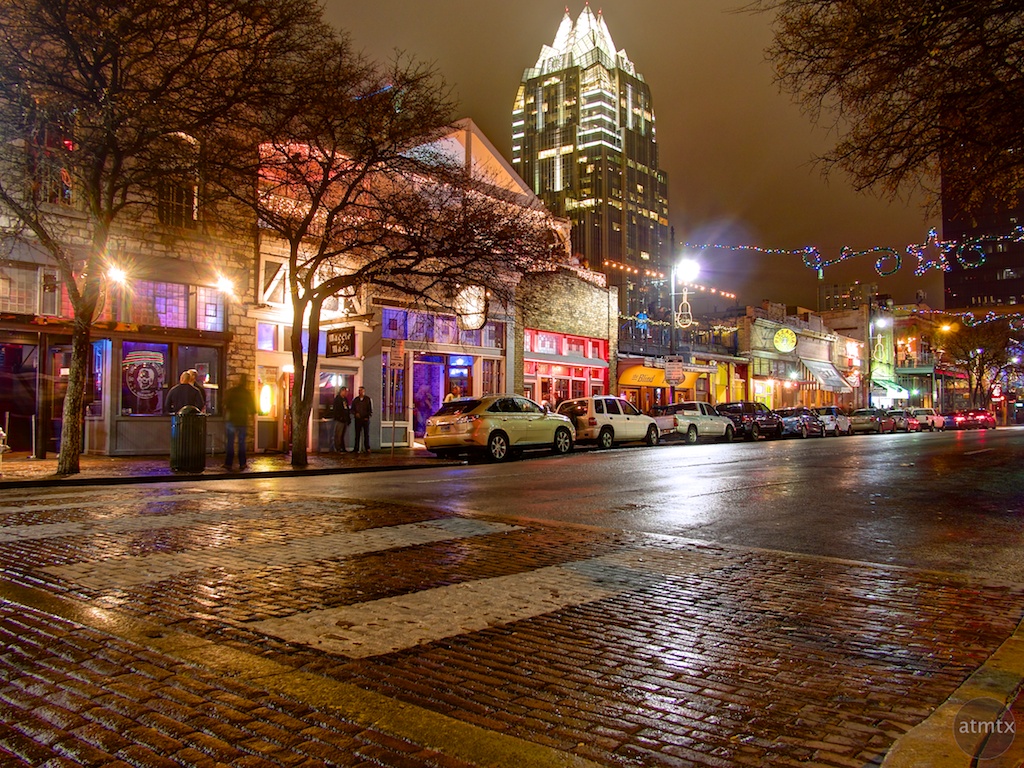 Precision Camera had their pre holiday Expo this weekend. Camera vendors from the big cities of Houston and Dallas came to Austin and showed off their wares. Ironically, Austin, still a medium size city, has Precision Camera which is the largest camera store in Texas. I met Charles from Olympus, who’s been nice enough to lend me some pre production cameras. Unlike some sales/technical representatives who are just sales people, Charles is an actual photographer. We decided go down to 6th Street for a photo walk and to enjoy the night life.

The rain stopped just in time and we had wonderfully wet and reflective streets, just as I hoped. I had my usual HDR setup — my Olympus E-PM2 with the Panasonic 14mm plus wide-angle adapter. This is my preferred lightweight setup and I would argue it may be the best way to take HDRs in low-light conditions, better in may ways that the Canon 6D. I’ll tell you why in a future post.

I also brought my Fujifilm XF1. I often shoot with two small cameras and I’m still in my discovery mode with my latest acquisition. You know that I like Olympus and I consider it my main camera but there are things that Fuji does better than Olympus. And I was very honest with Charles too. I wanted him to let the Olympus engineers over in Japan know how to improve their camera.

I talked about Fuji’s Super Intelligent Flash on my post The Fujifilm X100S from an Olympus micro 4/3 user perspective. The XF1 point and shoot has this feature too. The camera has an amazing ability to add just a touch of flash and blend it nicely with the ambient light. Here are some examples I shot on Friday with the XF1.

The first two photos are straight out of the camera JPEGs in Velvia mode, unprocessed. Notice the wonderful bar colors at Bourbon Girl but the portrait of Kasie is a bit dull. This is typical of ambient light portraits in places like this. The second photo is a flash shot with the Fuji. Notice how beautifully Kasie is lit while still preserving the background color. The Fuji does this automatically, without futzing with settings. Obviously, these are not serious portraits. They are just snap shots but the kind that I like to make of my family when we are in dark restaurants.

This third image was slightly post processed and is my final look.

This group portrait came out great too, again with the fill flash. Though the Fujifilm XF1 is just a point and shoot, it actually does a better job than my Olympus E-PM2 without the flash. The Olympus has a bigger sensor but a good flash can really help in these cases. The Olympus flash does an adequate by conventional job. Yes, it’s possible to play with the settings, set slow-sync or lower flash power but the Fuji is a lot easier since it does this automatically. By the way, Fuji’s big boy cameras like the X100S and the X-E2 also has this flash feature too.

Here’s one more Fuji fill flash example — It’s not just for portraits. Apparently, Austin had their Red Dress Run, and the bar quickly filled with all these characters. I popped up the flash, underexposed the scene by -1 2/3 stops and took the shot. Underexposing allowed me to maintain the colors in the neon and the fill flash lit the foreground. The light blended beautifully. 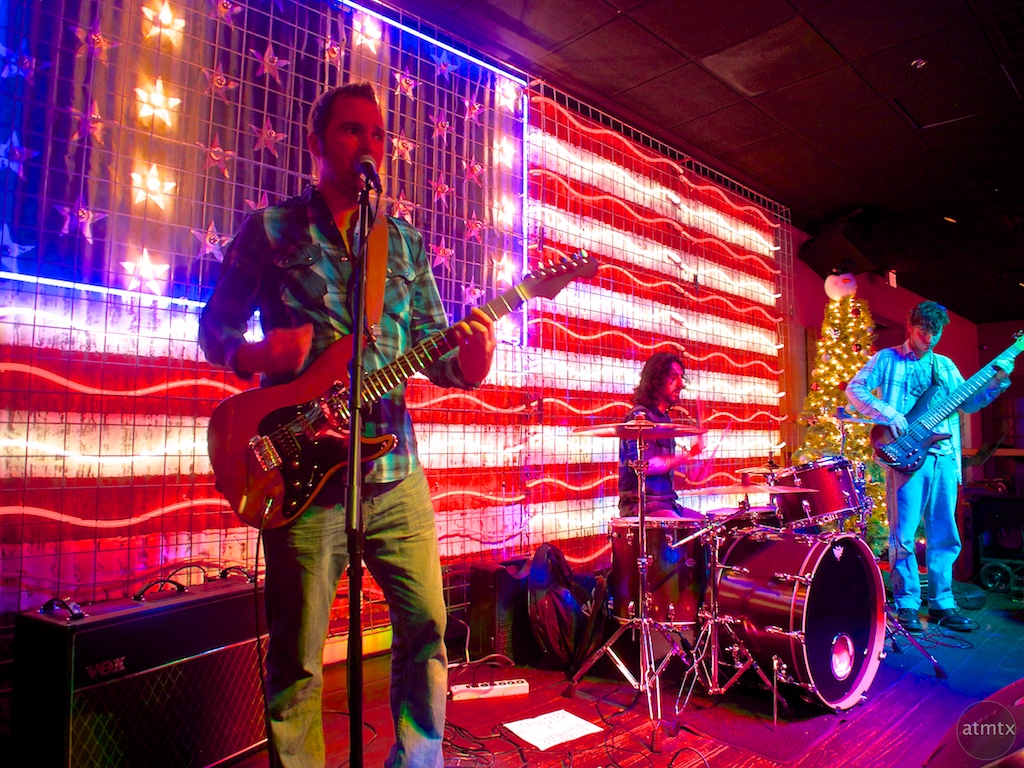 The XF1 is after all, just a point and shoot but pretty damned good for such a small camera. Of course, the Olympus E-PM2 does high ISO much better. I shot this wide-angle below at a very clean ISO 1600, hand-held with the E-PM2.

Back outside, I shot with the Olympus on tripod. This is where the E-PM2 excels and why I love the camera so much. I created the HDRs with 3 photos 2 stops apart. The wet streets were fantastic. Look at those lovely cobblestones in the first image, up top. 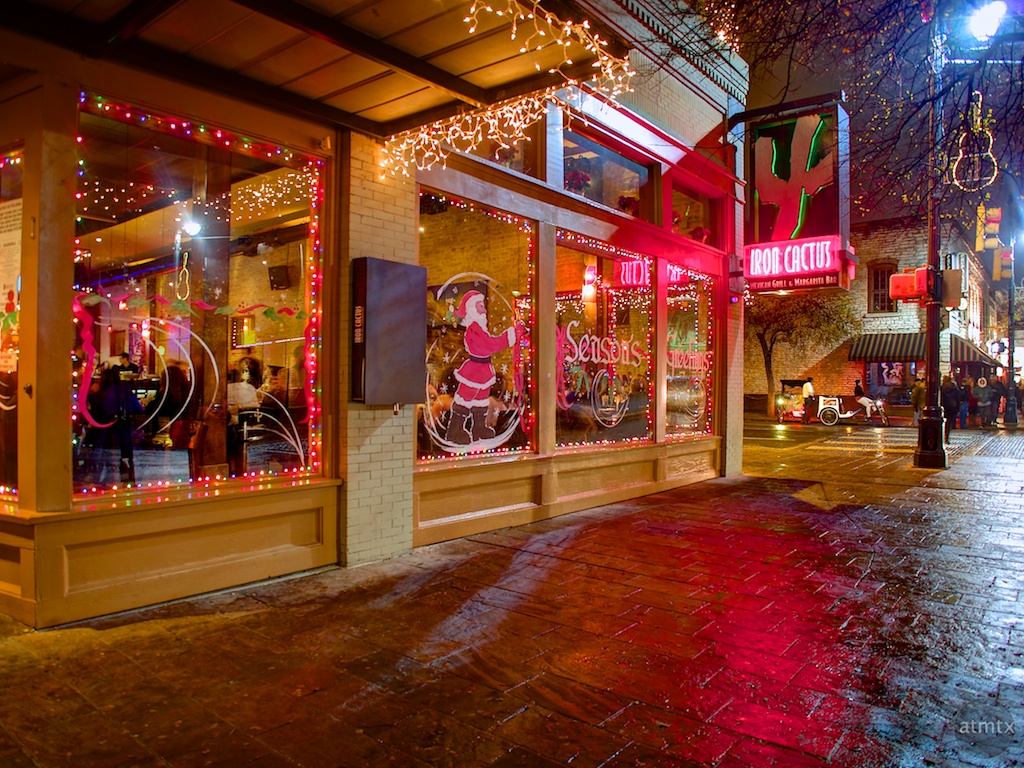 The neon red from the Iron Cactus sign also looks great off the sidewalk. 6th street was looking festive before the holidays. 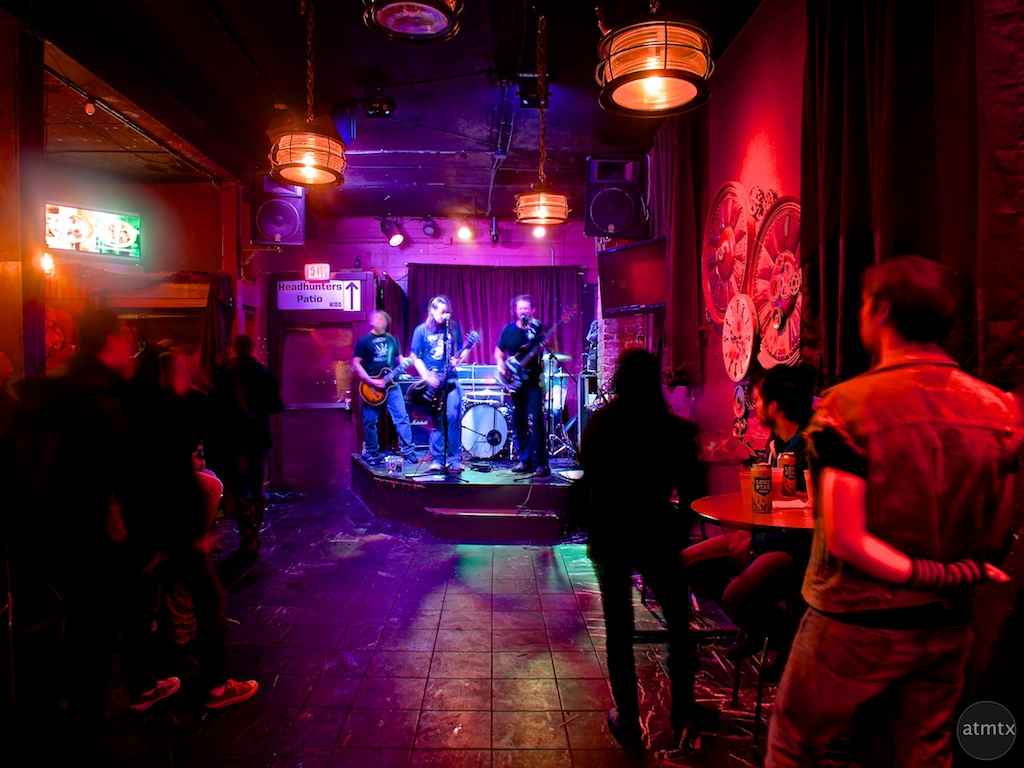 Finally, we ended up in a Steampunk influenced Heavy Metal Bar on Red River, just off 6th Street. The interior at Metal and Lace was dark but I loved the colors. I created this HDR which turned out to have the right amount of motion blur. I think it nicely captures the feel of the place.

The night out with Charles was fun. He very patiently listened to what I like and dislike about both cameras. I mentioned Fuji’s strengths to hopefully get Olympus to add these features. Every camera has its pluses and minuses and the advantage of using many brands is that you discover these things. It allows me to have a balanced view.