The Fujifilm X100S is no slouch.

It doesn’t have the pedigree or the history of the Leica M series cameras but at $1300, you can buy nearly 7 of them for the price of the Leica M and the 28mm f2.8 Elmarit lens. I got to use both cameras at the same time last Friday on 6th Street. A couple of days ago, I wrote about my thoughts on the Leica M with plenty of examples. This time, I’ll do the same for Fuji X100S. All photos in this post are from the X100S.

Keep in mind, this is not going to be a head to head comparison. That won’t be fair. I’ve only shot the Leica M for a couple of hours, with at most, several hundred frames. I’ve had the Fuji since March and have shot close to 20,000 pictures with it. It takes a while to get to know a camera and optimize its usage and image post-processing. That said, I’ve tried to include similar photos, when possible. You can compare these images to the ones I took with the Leica M.

I feel like I’m starting to hit my stride with the X100S — the images are starting to match my expectations. Along the way, I needed to get familiar with the camera and learn how to work around its weaknesses. I also tweaked my post processing to bring out richer colors. The thing with the Leica M is, though, I was able to get rich colors from the beginning. Perhaps the Aperture 3 DNG RAW converter does a good job. The Fuji RAW processing, while getting better, has been a challenge for many people. Since I’m getting the look I want, I’ve just decided to shoot it in JPEG and not worry about RAW. 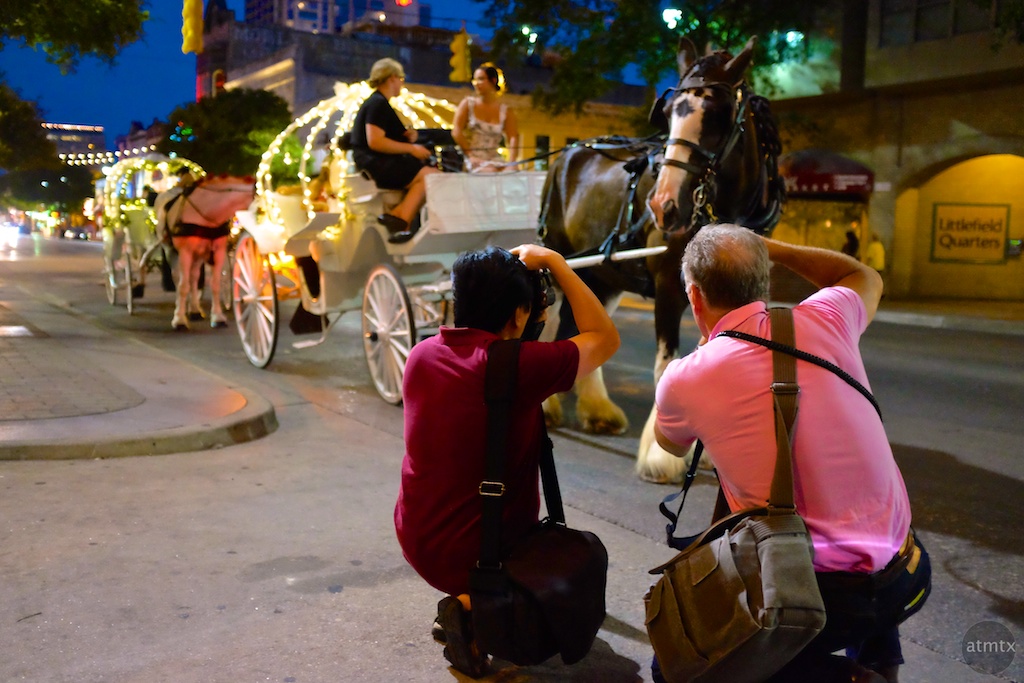 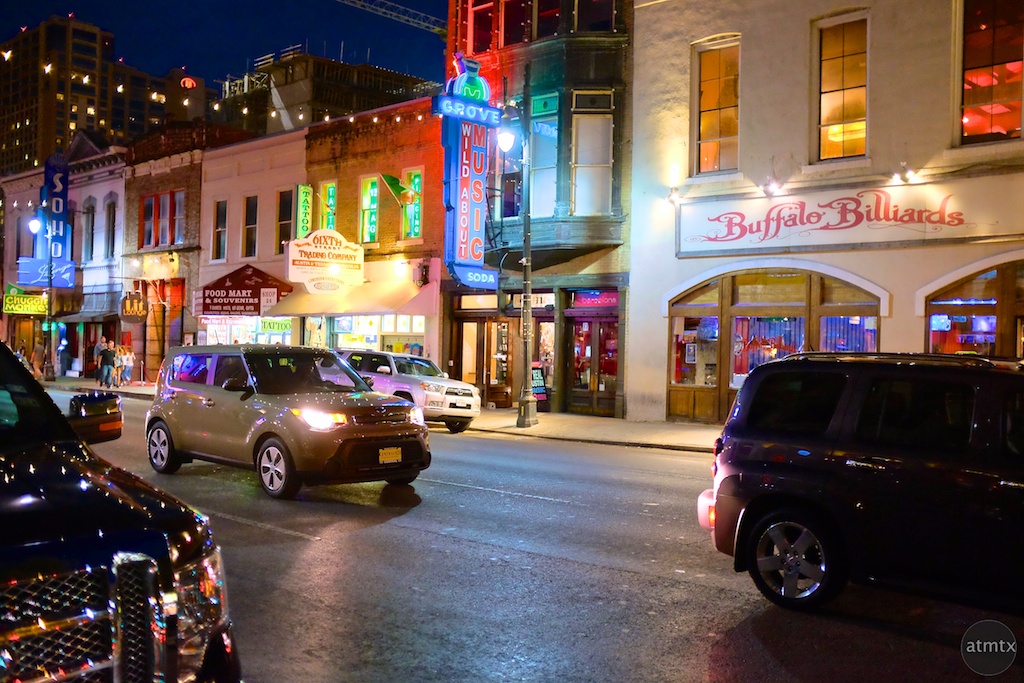 JPEGs typically have noise reduction at high ISOs. The Fuji does a great job, I shoot it up to ISO 6400 and it looks good. But inevitably the details are softer at higher ISOs, a concequence of noise reduction. It’s not terrible but when compared to the RAW Leica files, there is a noticeable difference.

The Leica’s photos are sharp but gritty. ISO 6400 works but may be too harsh for some and they might want extra noise reduction. I found that once in a while, even at ISO 5000, I saw some banding.

The question is, do you prefer low noise or more detail? I think most people will prefer’s Fuji’s processing — it more closely matches the expected norm. And of course the JPEG processing can be tweaked to your preferences. That’s something I have yet to explore, I’ve shot my JPEGs with the default settings. More stuff to play with in the future. 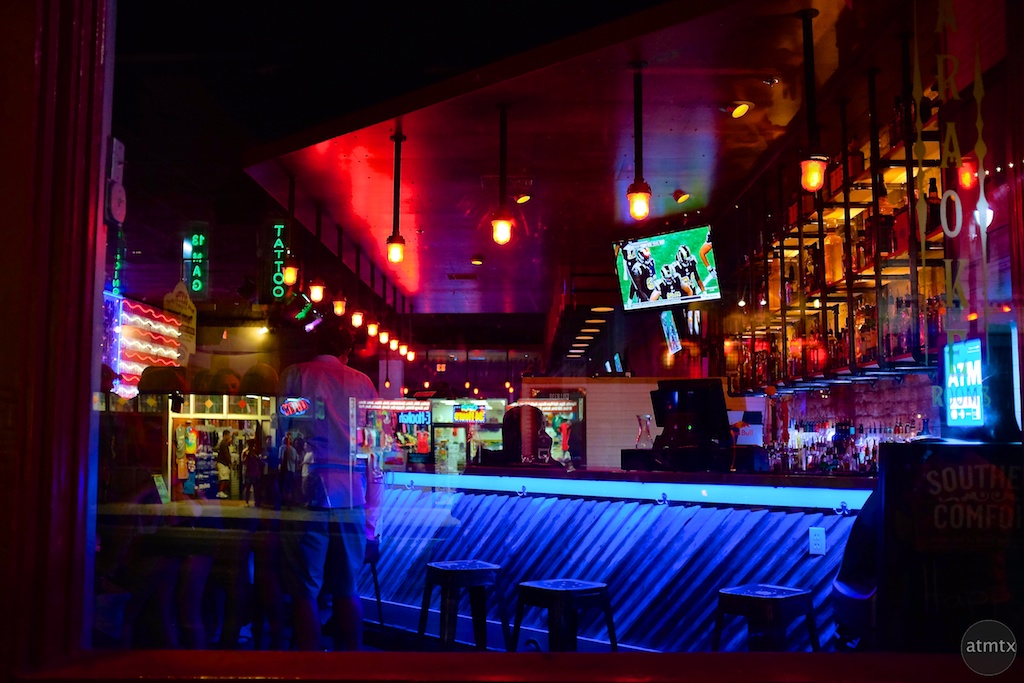 Many, including me, compare the X100S to Leicas — the Fuji has that retro range finder look. But the Fuji is really just a fancy compact camera with a fixed lens, not a true range finder. And the X100S apes the look of the old Leicas like the M3. The modern digital M, while retaining the general shape is now streamlined, minimalist and larger. It feels like design has trumped ergonomics to some extent. The exposure compensation dial, for example, is placed awkwardly and hard to use.

The Leicas have legendary, uncompromised build quality and the modern M is no different. It’s larger and heavier than expected though still small compared to full frame DSLRs. The X100S by contrast feels small and almost inconsequential. It is not cheap by any means — made of magnesium alloy — but next to the M, the two feel like they are in different leagues.

The M feels like it built for the next 50 years (though I wonder how long the electronics would last). The Fuji is just a solid, well made camera. But for small and compact shooting, the Fuji has the edge. 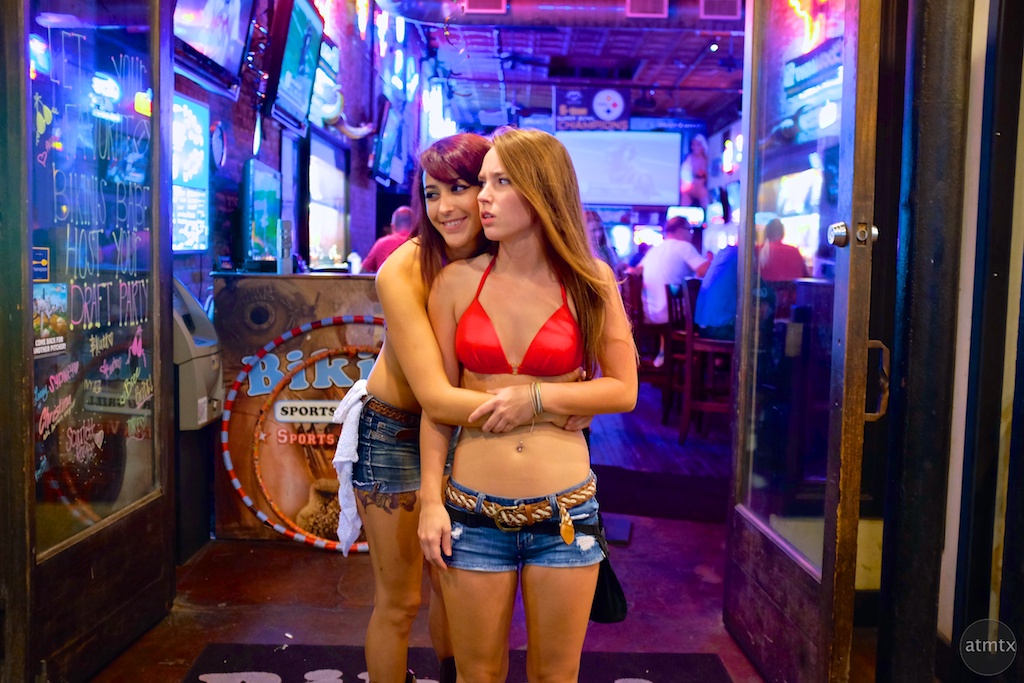 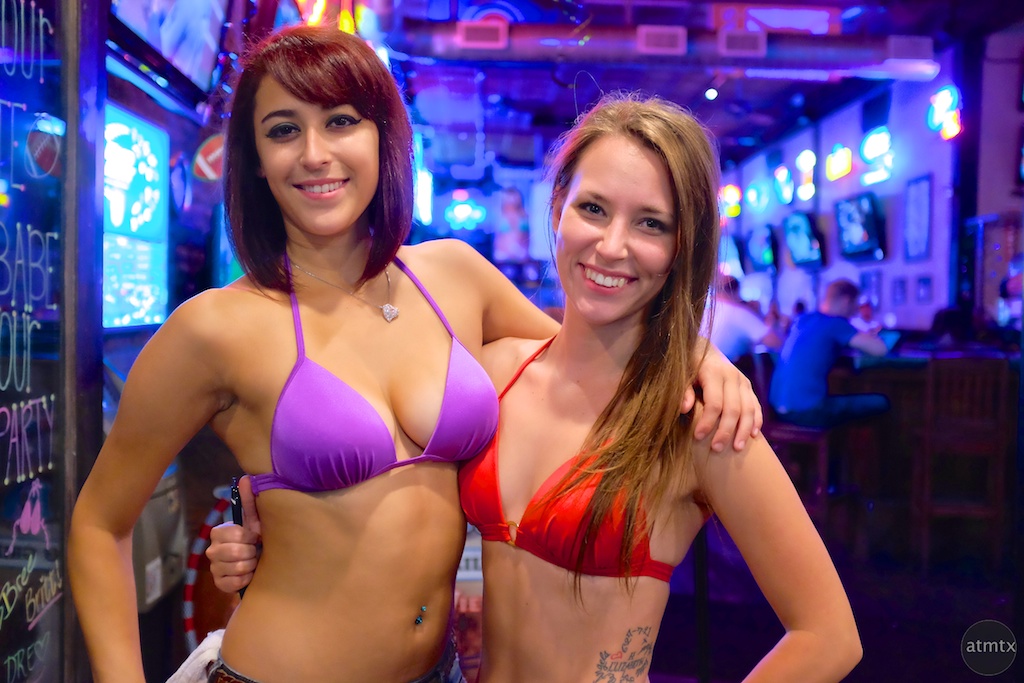 According to reports, the Leica M has greatly advanced from previous M8 and M9. That said, the electronics still seem behind. The Fuji, while I hardly consider class leading in electronics, is still more responsive.

It’s a totally different experince shooting the two. As I mentioned previously, I pretty much used all manual controls to set exposure and focus on the Leica. It’s time consuming but I’m guessing with practice, it should become a lot easier. Like the X100S, and more so, the M requires a lot of hands on time.

The Fuji works like a compact camera with auto-focus and good automatic exposures. I’ve complained about its lackluster focusing but taking a cue from the Leica, perhaps I should use manual focusing, particularly at night. For some inexplicable reason, the Fuji does a poor job contrast detecting horizontal details. 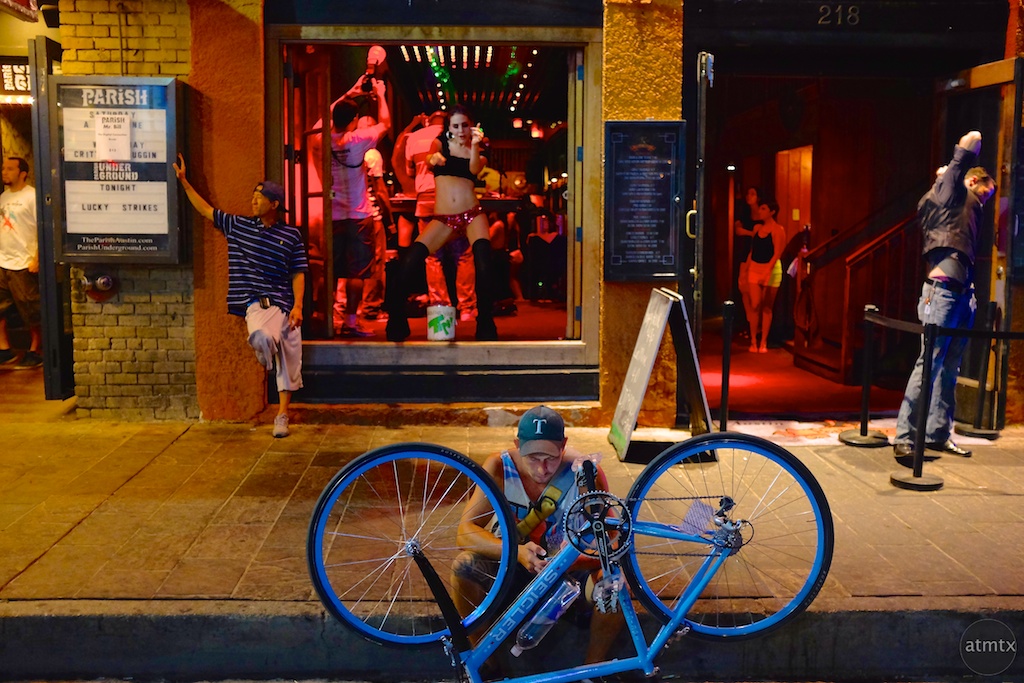 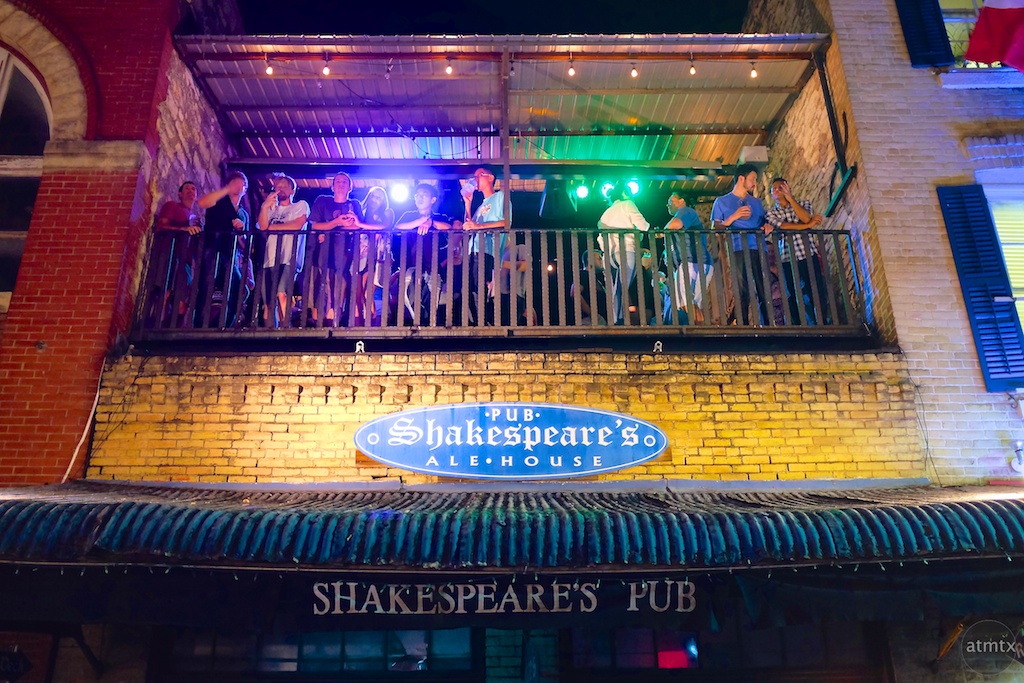 Compositionally, the biggest difference was the 28mm vs 35mm perspective. I’ve gotton so accustomed to viewing the world at a 35mm Fuji equivalent that the 28mm on the Leica seemed strange. I like 28mm, it’s just after 20,000 snaps, 35mm is burned inside my brain. With the 28, I need to force myself to get in closer. Maybe more than the framing, it’s the working distance to the subject that feels foreign. Of course with the Leica, I can change lenses. The X100S only comes with a 35mm equivalent, though there are now adapters to get a 28mm and 50mm. 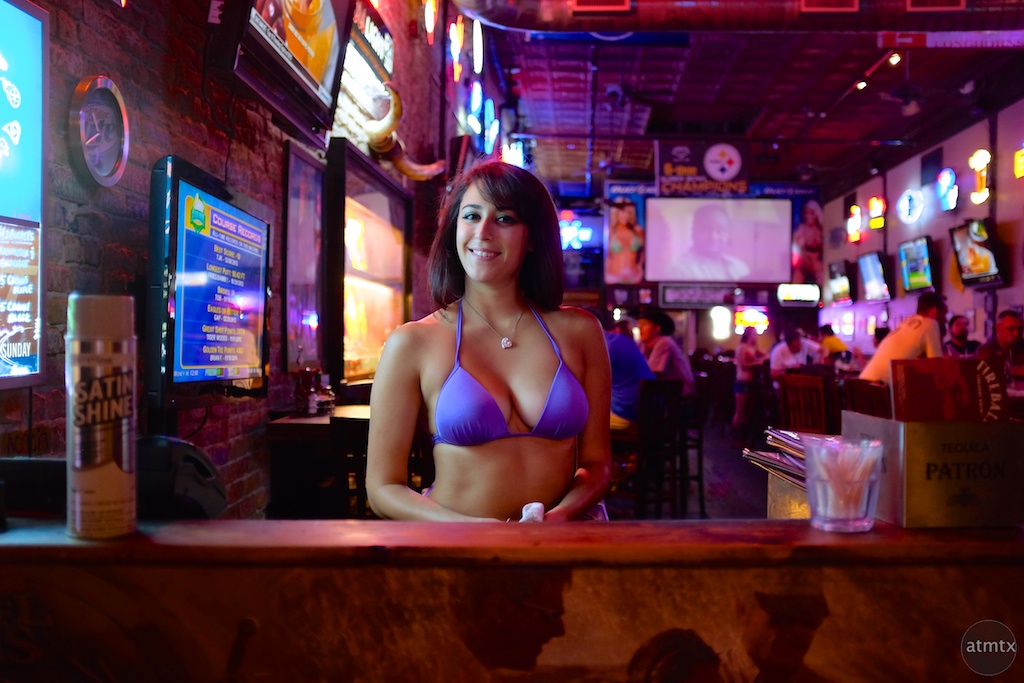 East 6th continues to attract me photographically. There is enough grit, details and people to be an ever-changing palette. We usually make a couple of passes along a five block area. After shooting a portrait of Lacey and Brittany earlier, I shot this environmental portrait of Lacey on my subsequent pass. 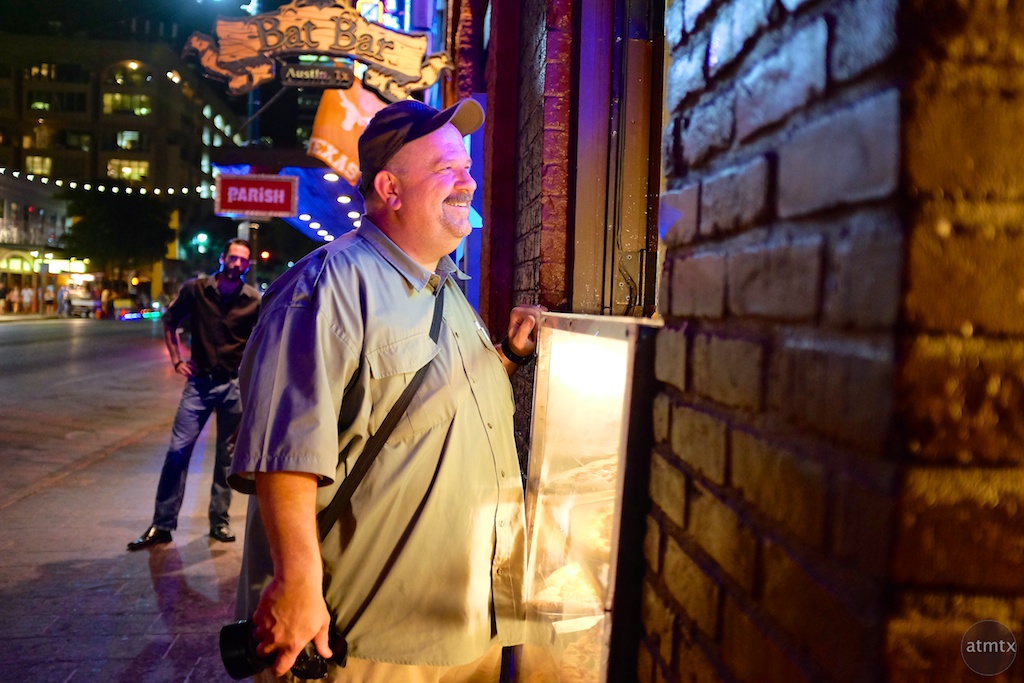 I also like this portrait of Jeff, another in a circle of local Austin photographers. 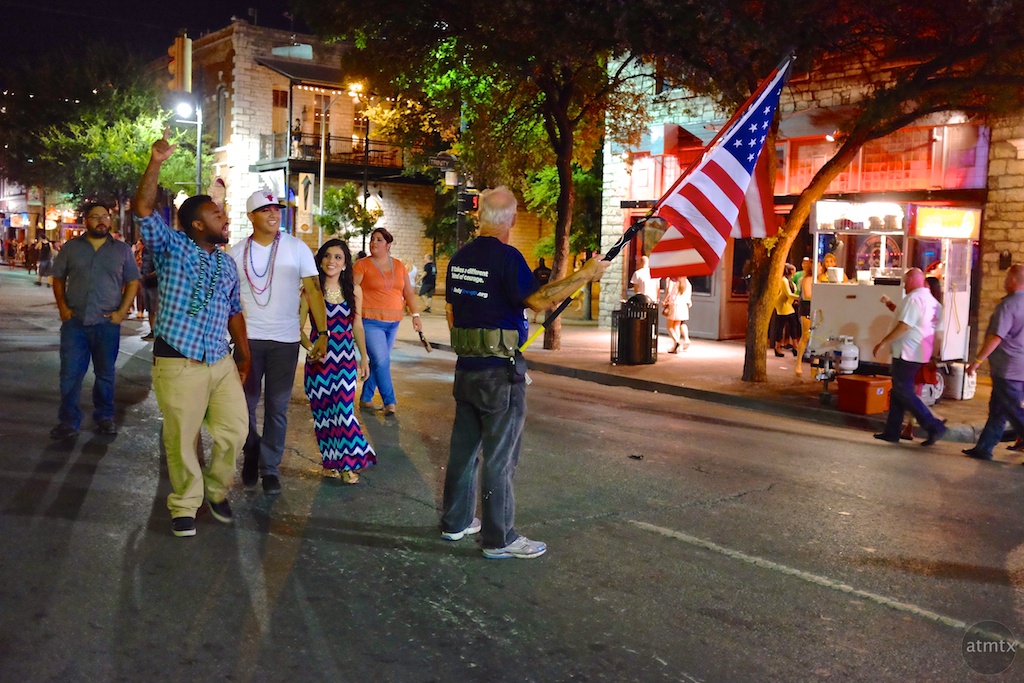 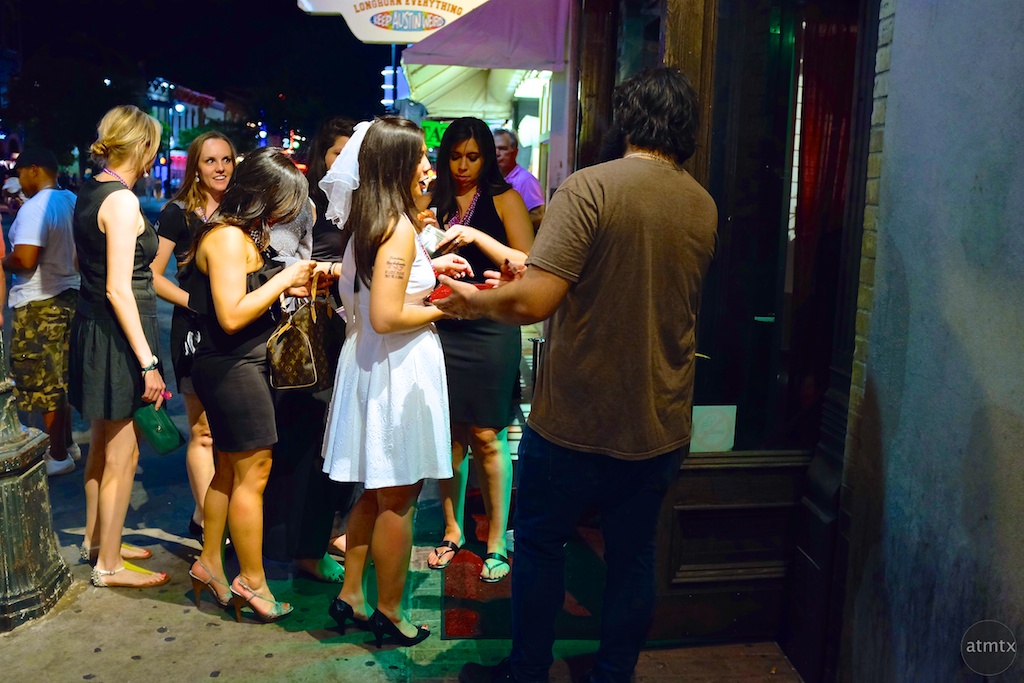 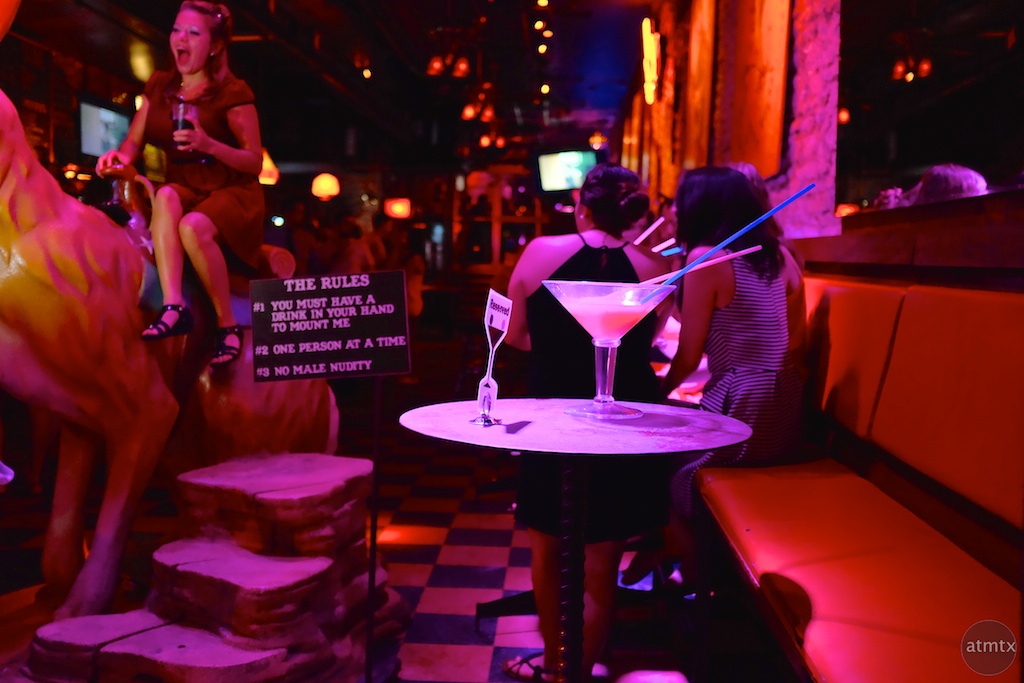 As much as liked shooting with the Leica, it took a lot of concentration. I needed a lot of mental processing to create those images. The Fuji is now easy. Ironic since 6 months ago, I complained about a similar thing between the easy Olympus and the then challenging Fuji.

I imagine with enough time, the Leica would also become “automatic” in manually setting its controls. I think it’s part of the fun of using such a camera. You feel like you are intimately involved in the creation of the image.

The Leica M at this point was a fun diversion, thanks again to Mark for letting me use it. The Fuji is now my primary camera, until, inevitably, I get another. For now it’s working great and as you can see, more than capable of creating late night urban photographs.

9 thoughts on “Shooting on 6th Street: Comparing the Fujifilm X100S to the Leica M”