So it was Friday night and what do a bunch of middle-aged photographers do? Party on 6th Street of course. Except for us, partying meant doing street photography rather than Sake bombs.

I met my friend Steven and new photographer friends Mark and Ann down at the Driskill Hotel. Mark and Ann are relatively new to photography and we did a crash course. Street shooting at night is sort of like jumping into the deep end of the pool, photographically. It’s not the easiest thing to do, but we all had fun. This was more of a social event and not a serious photo walk. 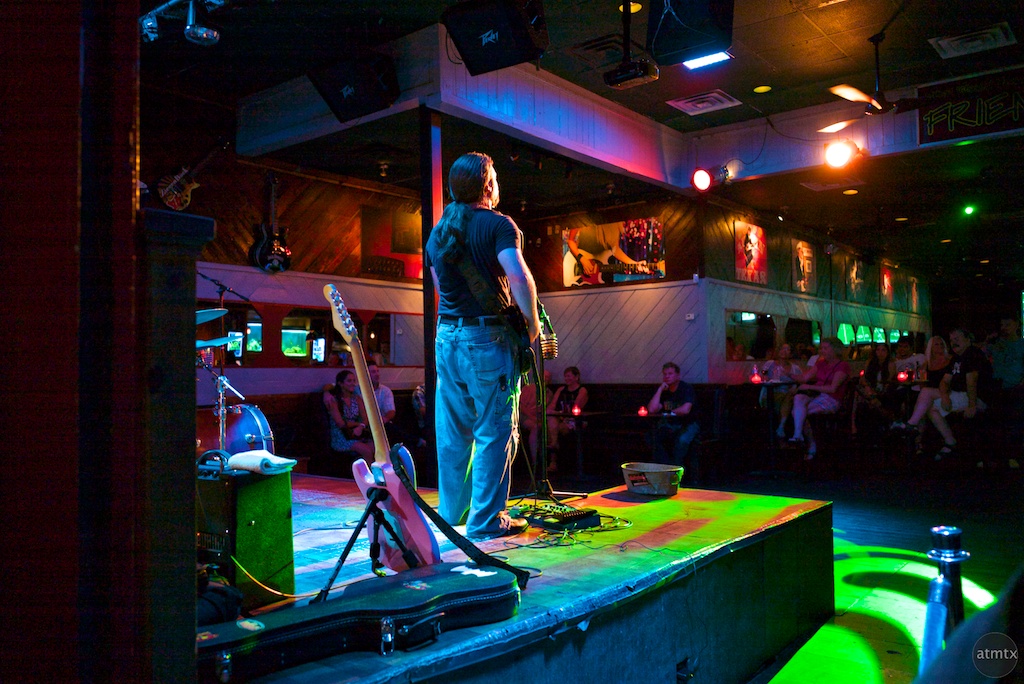 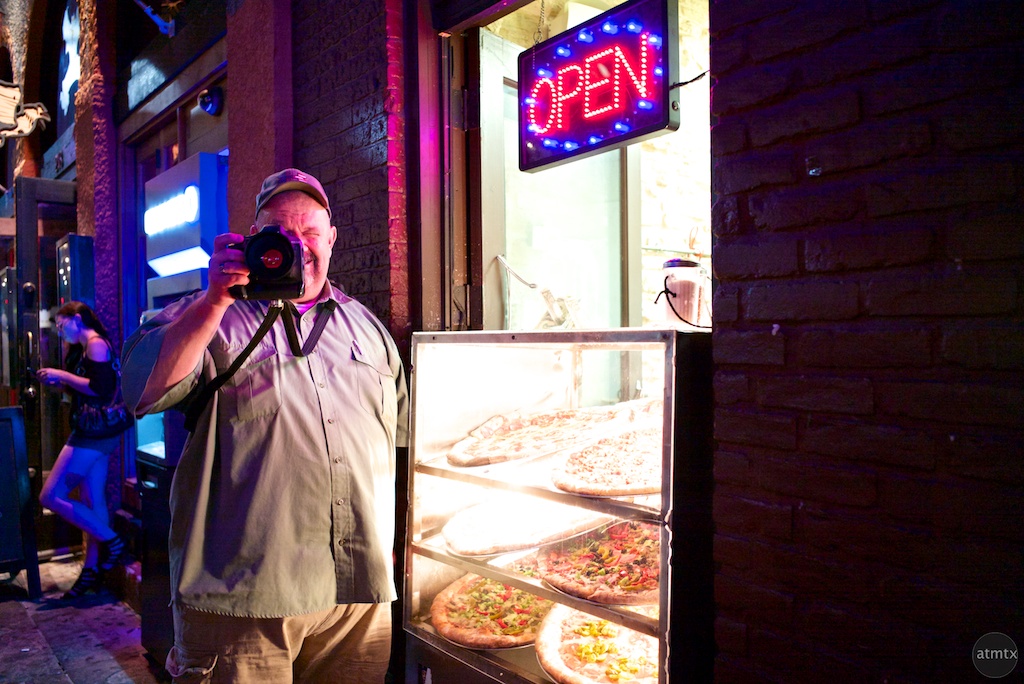 We met up with Jerry and Rosemary Sullivan, owners of Precision Camera as well as a few more photographers along the way. A healthy group of people for such a hot but dry Austin summer night. I’ve met Jeff a few times on 6th Street over the last several months. He had his big Canon camera with him.

As you may recall, last month, I played with a Leica M for the first time at the Drink and Click event. Mark again, very kindly, let me use his camera. Mark also brought his Nikon D800, as did Steven, so they conveniently shot a matched pair of D800s all night. I opted to use a true digital range finder, the Leica M and a faux range finder, my Fujifim X100S. I really got to experience, first hand, the true difference between the two. 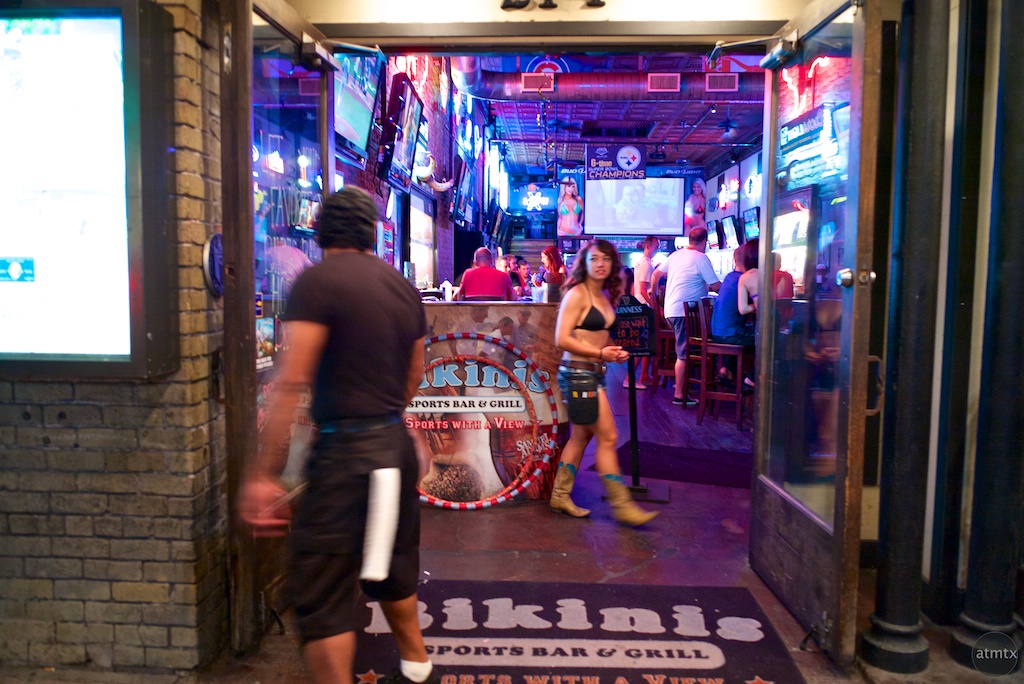 Remember back in March when I first got the Fuji X100S, how much I complained about it? It was quirky, slow to focus and found it generally a lot more challenging to use than my Olympus mirrorless cameras. I stuck with it and after 15K shots or so, the camera has become second nature. Muscle memory now, usually, reroutes my actions to ignore its quirky pitfalls.

Well, I’ve discovered the Fuji X100S is a walk in the park compared to the Leica M. For someone like me who never truly shot film with a manual camera, it’s a real eye opener. Consider that, first, I need to manually focus the lens. The exposure metering is center weighted and fairly primitive. Auto ISO did not work as expected. Exposure compensation is ergonomically hard to use. For a person who cut their teeth on digital and auto-everything, the Leica M can be befuddling and frustrating. 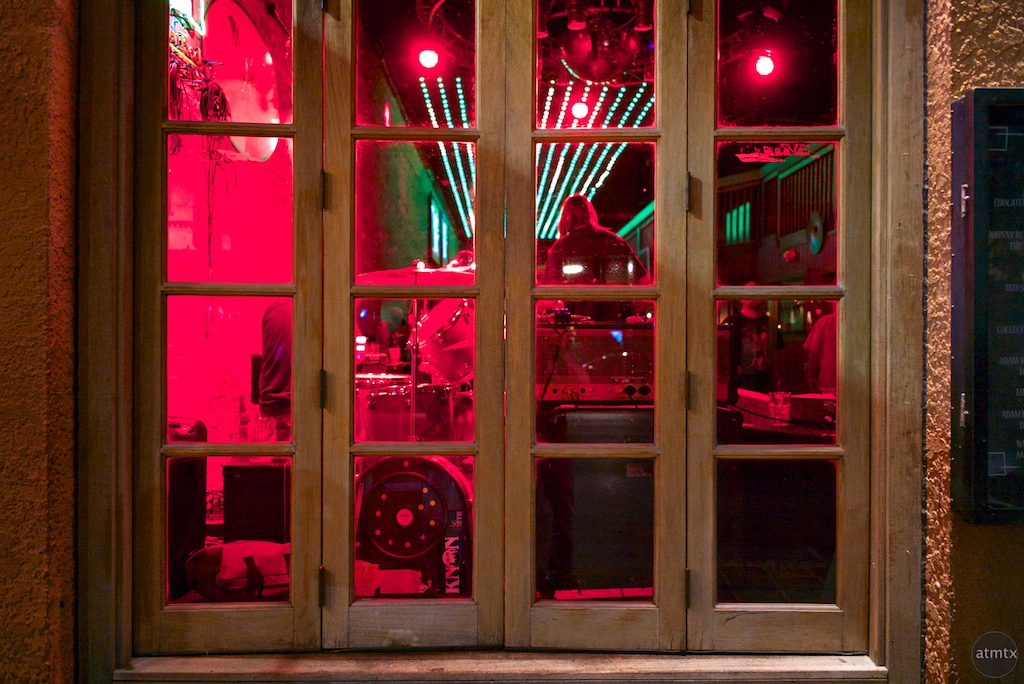 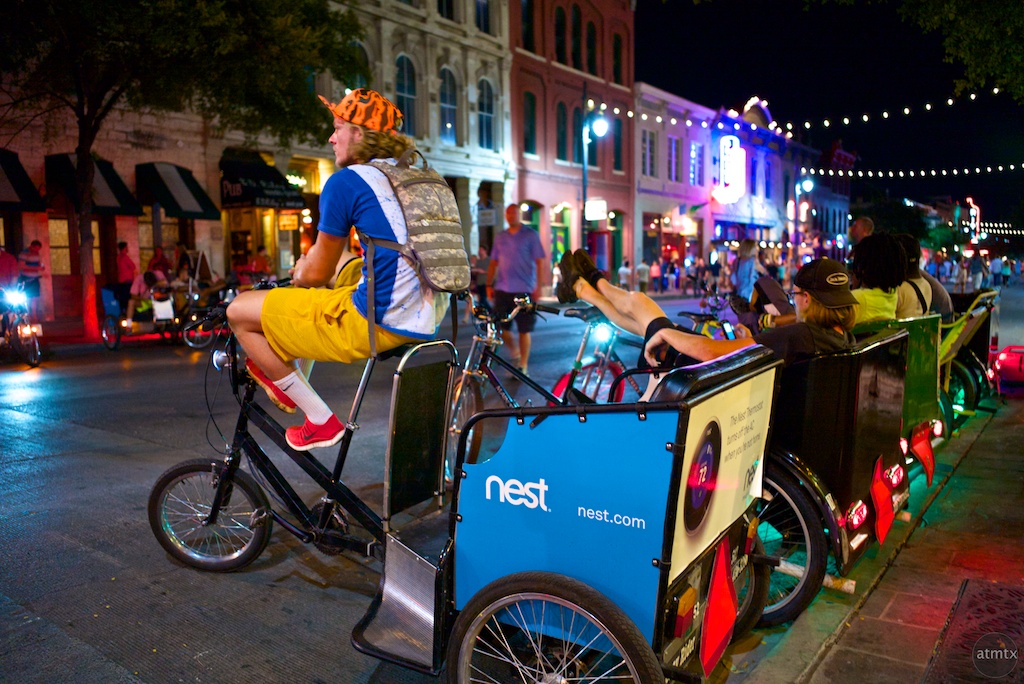 Oh, but get everything right and the images look fantastic. Perhaps, because you have to work harder to get the photographs, creating good-looking photos are doubly rewarding.

Using the M inside at a bar was one thing — the light levels were fairly uniform. On the street, changing conditions added an extra level of difficulty. Ultimately, I decided to use full manual exposure, setting the shutter speed and aperture and also changing the ISO too, when required. It was the closest to a film experience I had in a while. But I had one modern aid that really helped, the rear LCD. Since I didn’t trust the exposure meter, I used the LCD to judge exposure and it seemed to work great.

This may be the first camera where the pictures on computer actually look better than what I expected. I went through enough manual gyrations that I didn’t, at least just yet, have confidence in my abilities. It looked good on the rear LCD but you know how often those little screens can be deceiving? Often times, on my other cameras, photos on my large computer display don’t live up to the small camera previews. 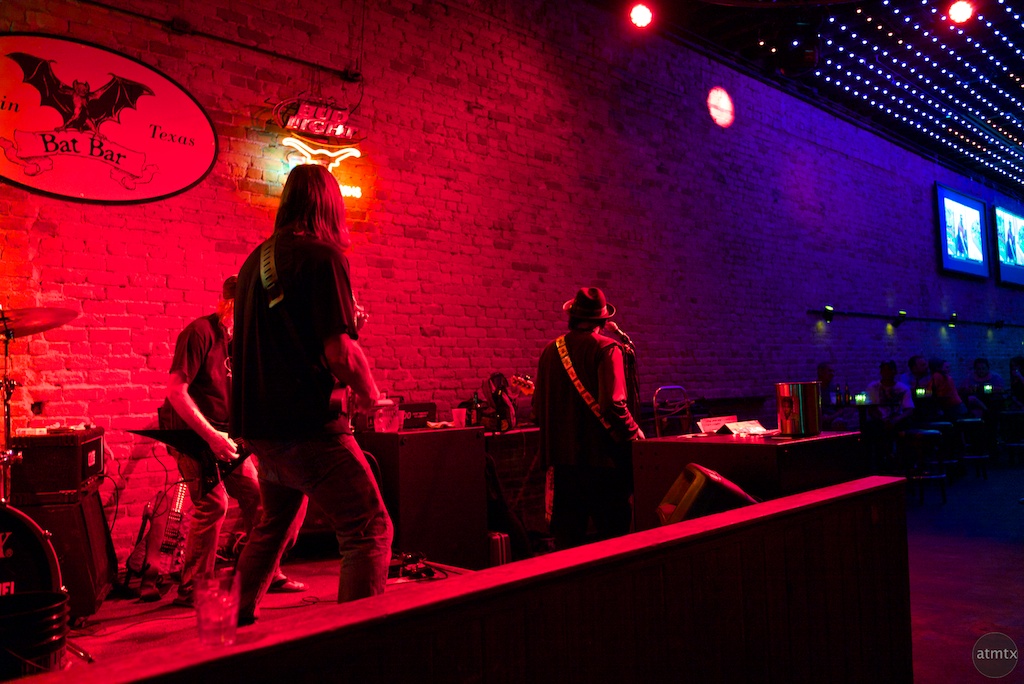 Two things really stand out image quality wise. The first is the color. I love the rich vibrancy. Red and purples are usually hard to reproduce, Look how nice it looks at the Bat Bar. 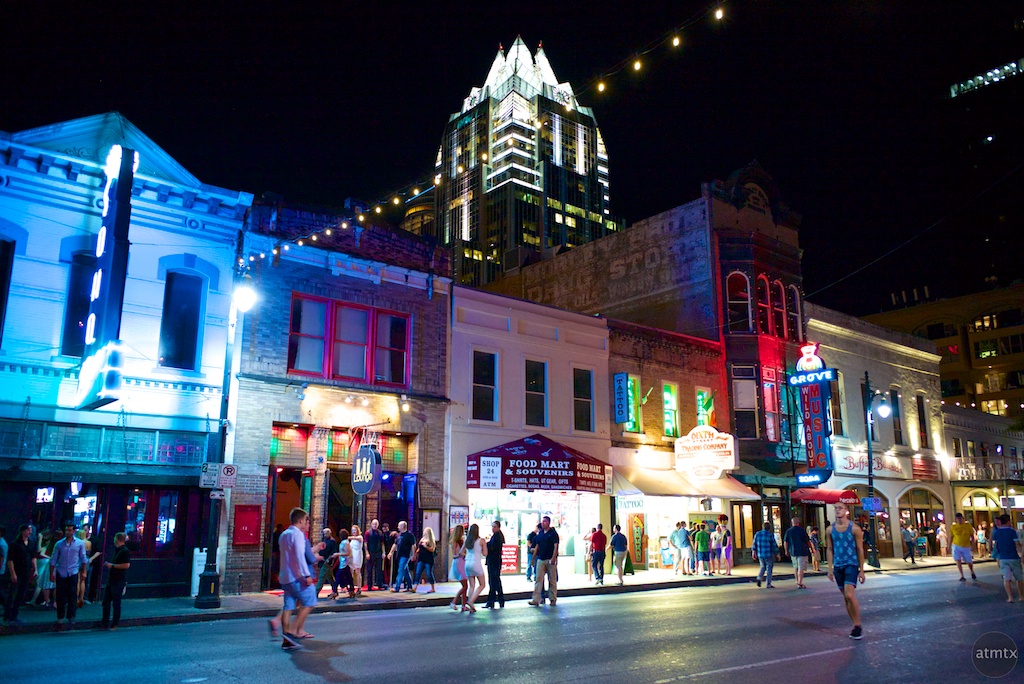 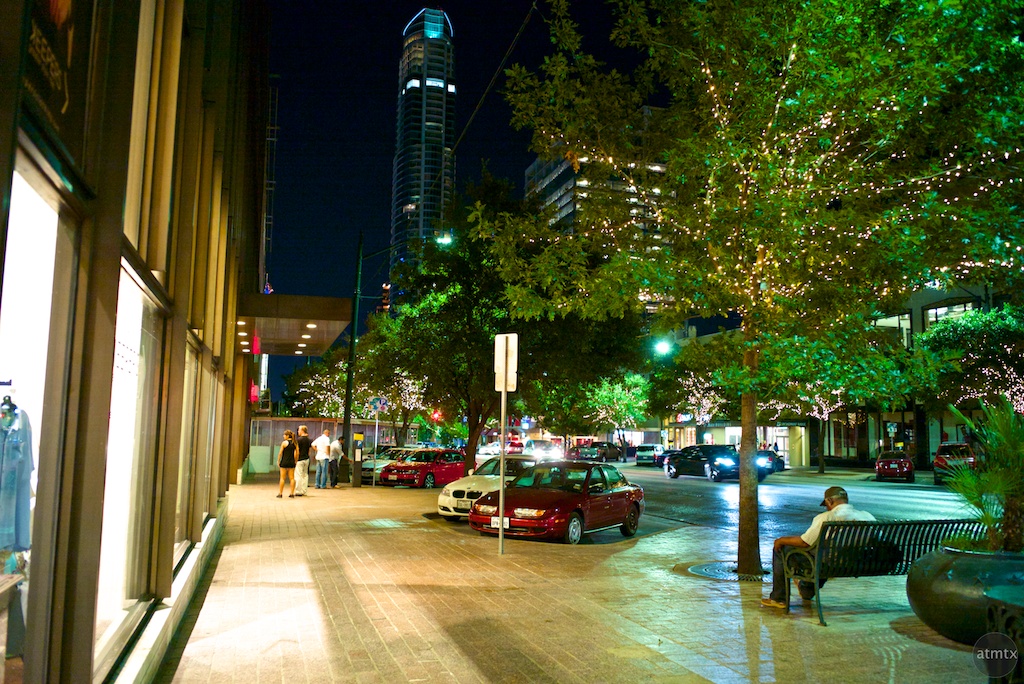 The second is the sharpness. When focused properly the details are magnificent. I’m sure the world-famous Leica glass has something to do with that. However, the lack of an anti-aliasing filter plus the in camera processing also, I believe, is a big factor.

Despite my unease at using the camera, I was still able to capture much of the action at night. I certainly made mistakes. Sometimes I seem to knock the aperture ring when I focused. This shot would have worked better at f2.8 instead of f4.

ISO wise, I would use it up to 6400, which can get a little rough at times, but still generally acceptable. It’s noisier than the X100S at this ISO setting but considerably sharper. There is no JPEG smearing to diminish the details. And yes, I shot the Leica in RAW which produces a DNG file which should work with most RAW converters.

Finally, the Leica M seems to produce images with pop. I know this isn’t a technical term but somehow, it seems to render mundane scenes with an extra bit of panache which make them more exciting. Perhaps it’s the clarity of the optics but when you look the last three photos, they somehow seem different. Maybe backlighting and headlights just look good with the Leica glass.

Of course, I haven’t shot the Leica M enough to give it a thorough review. I have no idea how well it works under other conditions. However, despite the challenges of using the camera, I ultimately feel happy with the results. My thanks again to Mark for letting me use this special and pricy camera. 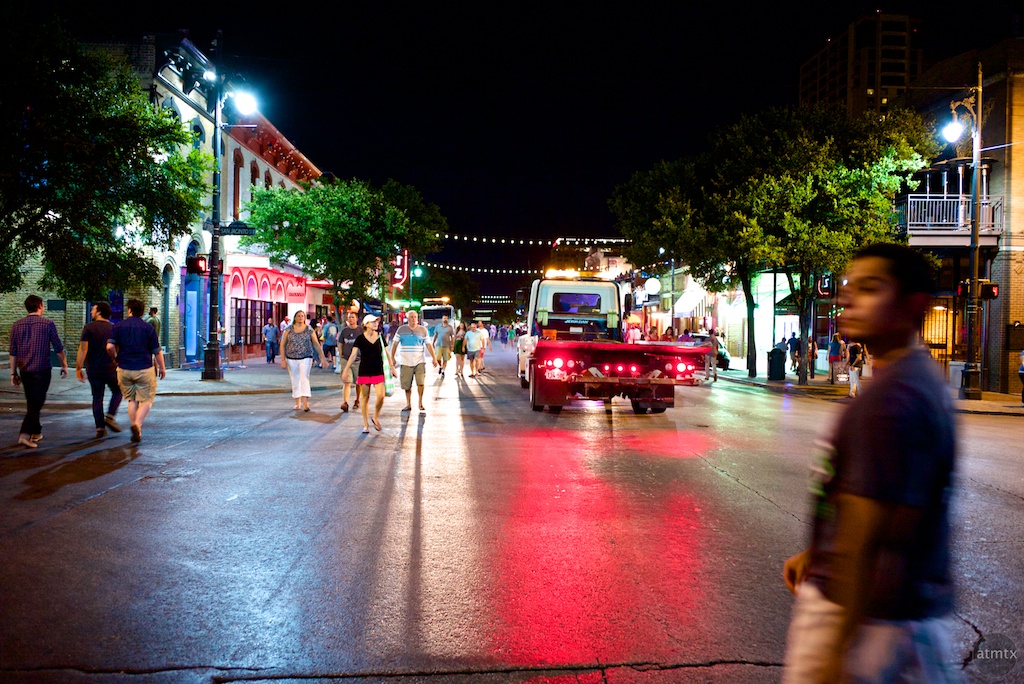