I’ve talked a lot about film lately but I still shoot digital. I haven’t tuned into a luddite just yet.

Two weeks ago, I was on Rainey Street with my friend Mark. I’ve been there before, many times on Thursday as part of Drink and Click. Friday, I found out, was a completely different story. Crowds overwhelm the once quaint and downtrodden residential neighborhood. Most of the tired bungalows are now transformed into hip bars surrounded by towering condos. Yup, It’s Austin’s latest trendy night spot. Unlike 6th Street, with dirty low rent bars surrounded by colorful characters and catering to tourists and college students, Rainey Street street pulls in a higher clientele. At least it seems that way but I fear it’s popularity might inundate this small neighborhood.

We ate an early dinner at NO VA, a stylish and modern restaurant, and talked photography. Mark sported a pair of Leicas, a film one and digital one. I came lightly equipped with a single camera, the Fuji X100S. Our hostess had striking red hair and a pleasant smile and I asked for a portrait. The second floor balcony gave us a unique vantage point over Rainey and I thought Monica’s red hair would contrast very dramatically against the trees. The food was great too. A humble burger was transformed into fancy food and I’m told that they make everything from scratch, including the ketchup.

It’s hard to overestimate the change in this neighborhood. Adding to the 3 or 4 already built condos are several more big developments. This one is going to be the new Kimpton, the Hotel Van Zandt. A couple blocks north, the new Fairmount Hotel, which is said to be a 1000 room 47 story tower. I hope all this development doesn’t crush the feel of this place.

It was already dark when we left NO VA as we strolled through several interesting establishments. On 6th street, I shoot the people as well as the surroundings. Here on Rainey, I’m attracted to the details. Each place has put an emphasis on unique design. I love capturing the environment, especially at night. I’m attracted to the glow of lights, especially the kind that hang like pearl necklaces over patios. You see a lot of this on Rainey and I soaked it up. 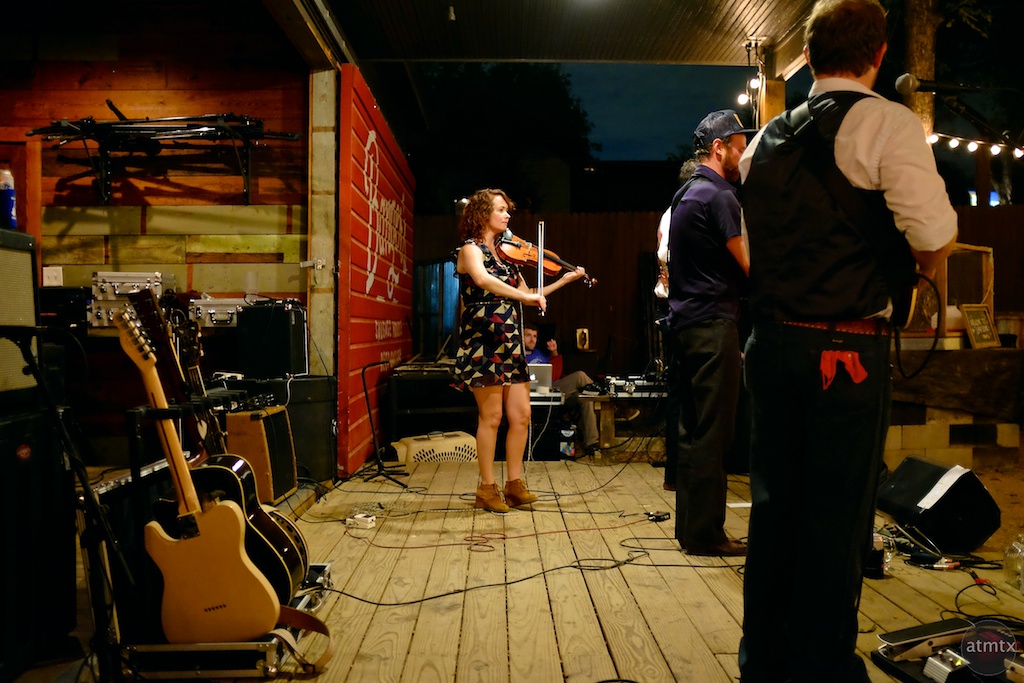 First up, Bangers. Completely packed and serenaded by music, this place had a really good feel. It does a good job capturing the romantic image of Austin — wide open spaces, casual dinning and live music. The weather wasn’t bad either. Mid to late September is when the heat usually breaks in Austin. For a short time, with some luck, we get a few weeks of that California-like weather. Some people here wish for this kind of climate all year around. I don’t. Imagine how expensive it’ll be to live here with great year round weather? The prices are going up too much already. I say the heat keeps the weak away (and keeps the prices down, somewhat).

Lucille has a simple but striking design element. A glowing chandelier against a deep red cloth. More than other places on Rainey this place maintains its bungalow roots. Drinking here is like being invited over to an artist friend’s eclectic and humble house. The red centerpiece was enough to attract my camera and the ample windows made for numerous framing opportunities. 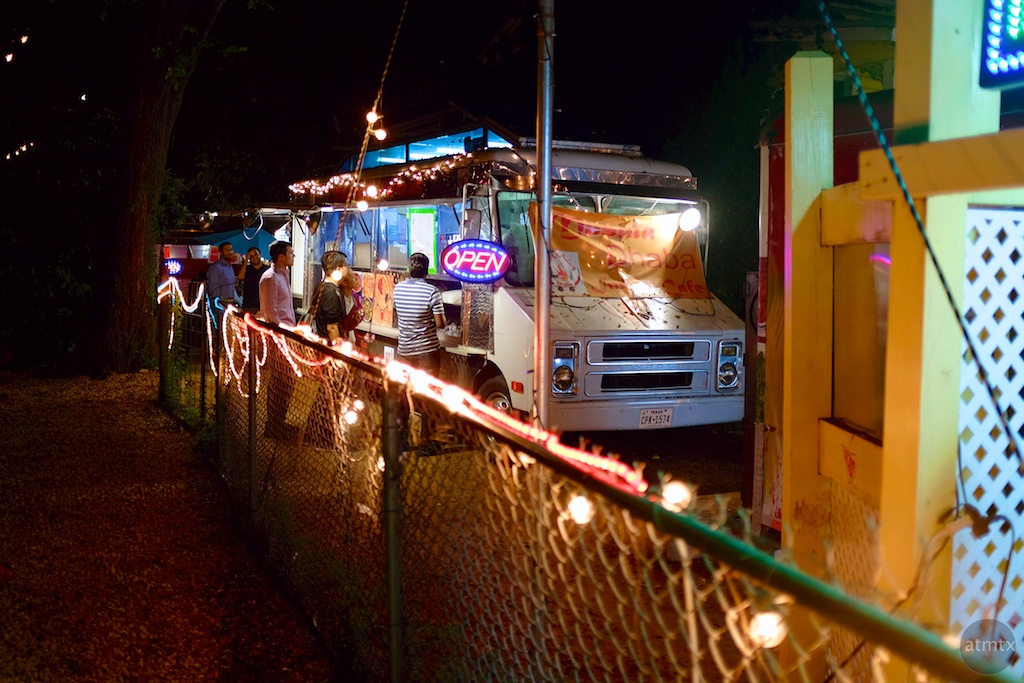 This are only a few remaining un-renovated buildings. This one rents out their yard to food trailers. There’s another food court like food trailer park on the other side of the street.

We met up with Mark’s friends celebrating a birthday at the G’Raj Mahal Indian Restaurant (love the name). Nice inexpensive details at this place, put together into a cohesive whole. I’m not sure how it looks during the day, but at night, it works. I ended up taking some people snaps with the built-in flash during the party, which the Fuji X100S does exceptionally well. I don’t often use flash but it comes in handy for sure. Beats taking smart phone photos with their underpowered LEDs and it’s more versatile than expensive cameras with no built-in flashes. 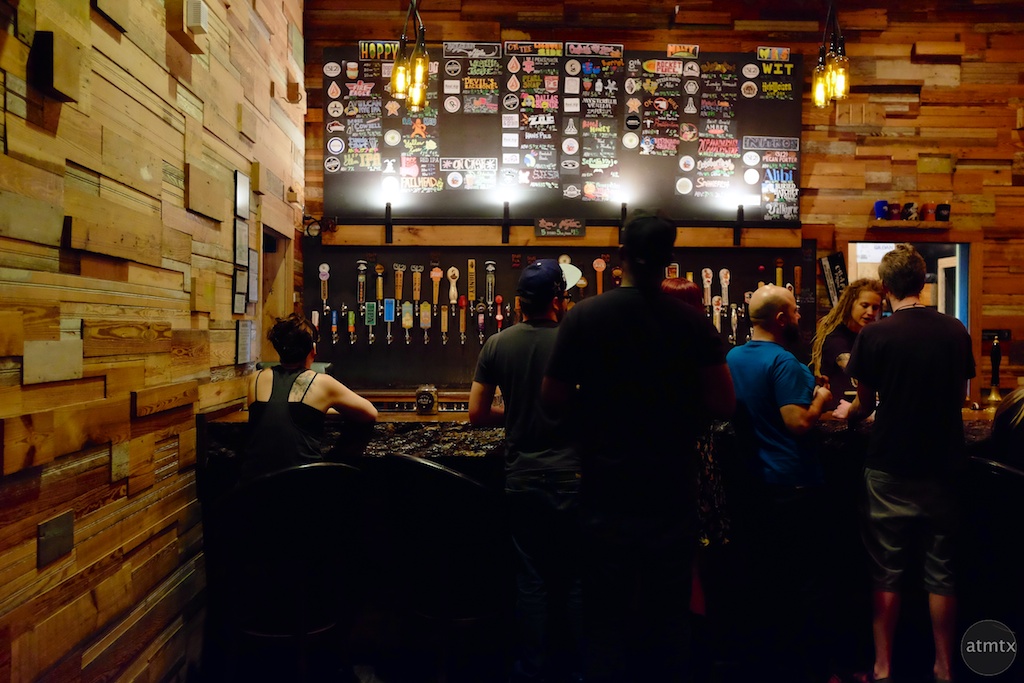 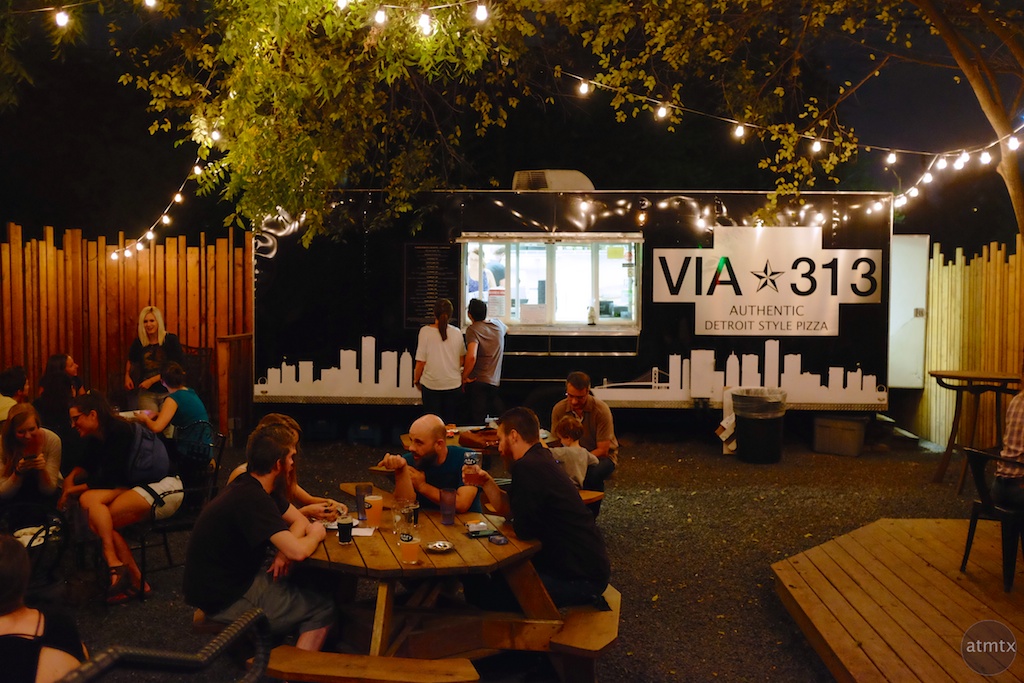 As you might have guessed, there’s a lot of hipsters with thick bushy beards here. I wonder how they make it through the Austin summers? Craft Pride, with 54 local Texas brews, get’s my award for the most full breads per square feet. For me though, what’s more important is that wonderful glow off the black board, warm wood textures and ample opportunity for moody silhouettes. Yes, unlike normal people who judge a brew pub by their beer, I’m more attracted by design, light and shadow. Out back, more glowing lights and a giant food trailer. Coming from New York, I never realized Detroit Pizza is a thing. 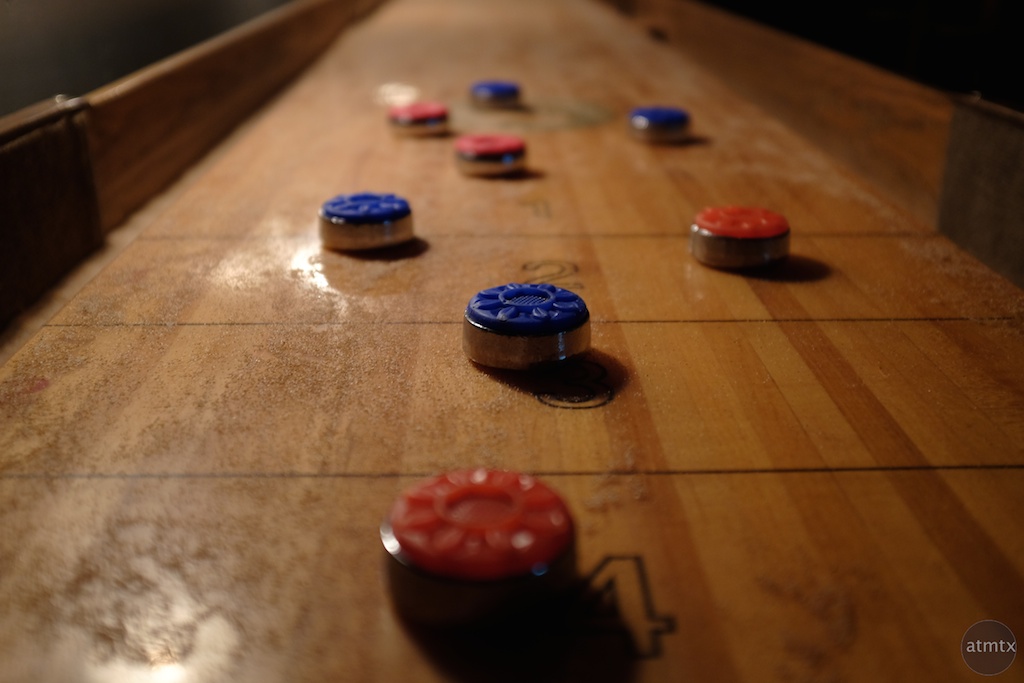 Last in this quick and partial tour of Rainey Street is Javelina Bar. I remember shooting here before with a preproduction Olympus OM-D E-M1 during a Drink and Click. That Thursday was particularly hopping with a live band and people dressed up in 1920’s garb for a murder mystery. On this particular Friday, however, it was still rather quiet, no doubt waiting for the onslaught to come later.

As Mark and I left, revelers streamed in from the north. Though Rainey Street is tucked into the out-of-the-way south-east corner of the Central Business District, it has hit the radar in a big way. The entire area is rapidly changing and I predict in the near future that there will be an unbroken chain of night spots all the way from 6th street. With all the hotels nearby as well as the convention center, out of towers will come here in droves. Perhaps the native Austinites will shift to another area. I know 6th Street, east of Interstate 35 has already started the journey of up and coming night spot.

It might sound like downtown Austin is turning into one giant party scene. Not quit, of course, but it’s nice to have a downtown with enough pull to get people from the suburbs as well as other cities to visit.