Conveniently, the day after I got my OM-D E-M1 test unit from Olympus, Drink and Click was having their biweekly meeting. Drink and Click is a combined photo walk and social drinking event that started in Austin. It’s become popular with chapters popping up around the world. I thought it would be fun to test the camera there and to show off Olympus’ flagship to a bunch of photography and camera enthusiasts.

The light level was rapidly dropping as I got to Rainey Street, a new hip area in downtown Austin. What was merely a residential neighborhood a handful of years ago has turned into a street with converted small bars and towering condos. Unlike the other entertainment areas in Austin, Rainey Street has a smaller more intimate feel. It almost feels like going to a party at someone’s house. I love the texture here along with the irresistible glowing lights.

Meeting at the Javalina Bar turn out to be a lucky choice. In addition to our photography group, the place hosted a 1920’s style murder mystery party complete with gangster and flapper costumes. It added yet another level of visual interest that made for wonderful photo opportunities. 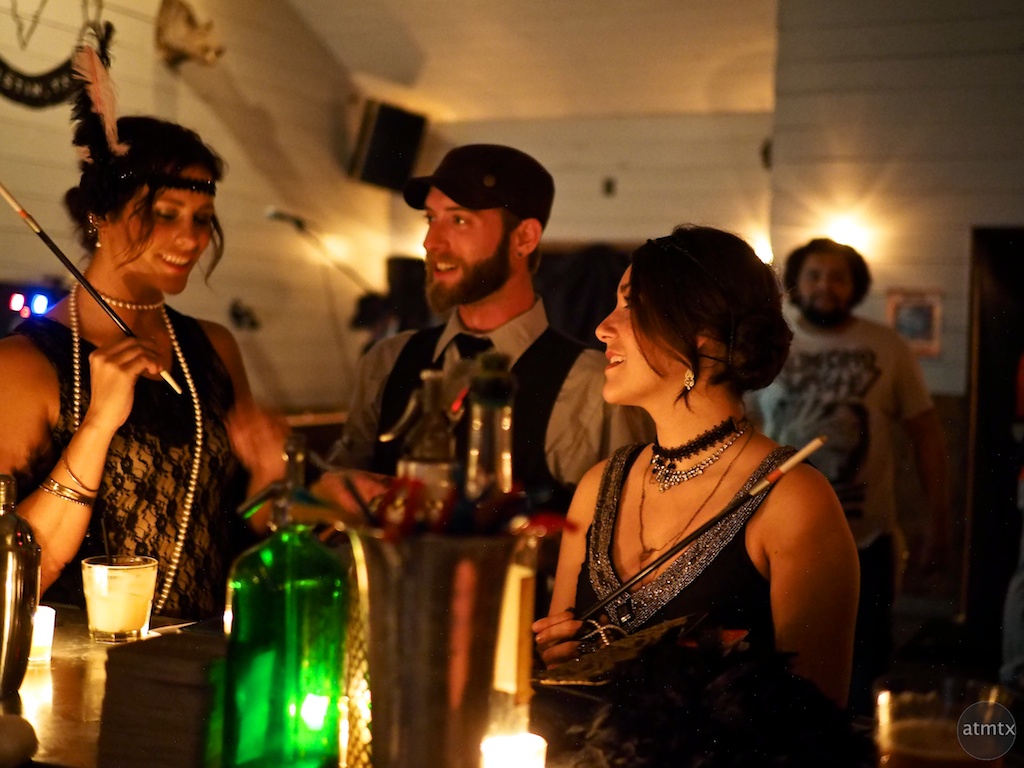 In addition to the brand new Olympus 12 – 40 f2.8 Pro lens, I also brought the Panasonic Leica 25mm f1.4. The combo worked well together and the camera and two lenses fit comfortably in the small Domke F-5XB bag that I typically use. I felt especially lucky when Charles from Olympus said that I have the only copy of the 12 – 40 lens in Texas. While the E-M1 itself will be released to the public in a few weeks, this pro lens won’t be available for a couple of months, according to Amazon.

So how did the camera work?  Splendidly. As you can see, even in this very dark place, I was able to make some decent, moody photos. I shot in JPEG + RAW since the RAW converter for Aperture 3 is not available. In this lighting and with the JPEG processing, the images look cinematic to me. ISO 3200, no problem. Even at ISO 4000 and 5000, the noise is well controlled. With JPEG, the camera applies noise reduction so the images are typically softer than in RAW, but viewed at full size on a 27″ monitor, they look good.

The video mode worked well and improves with every iteration. It seems to work better than on the Olympus E-P5 that I tested recently. I think that magical, all in one, stills and video shooting camera has finally arrived. I shot this clip inside and in some horrible light. The camera did a great job, certainly better than my camera work shows. I moved around and zoomed and things stayed in focus. The 5 axis image stabilizer works wonders for video and unsteady camera operators.


As nice as a constant f2.8 zoom is with this first Olympus Pro zoom, under these conditions, having a f1.4 prime is really handy. I started shooting with the 12 – 40mm zoom but switched to the 25mm f1.4 as it turned to night. The zoom was the hit of Drink and Click though. Like some of the Olympus primes, when you pull back on the focus ring, the zoom goes into manual focus mode. I set the camera to magnify and focus peak. Turn the focus ring and you get some high-tech aids to nail manual focus really quickly. I passed the camera around to several people as they loved playing with this feature. 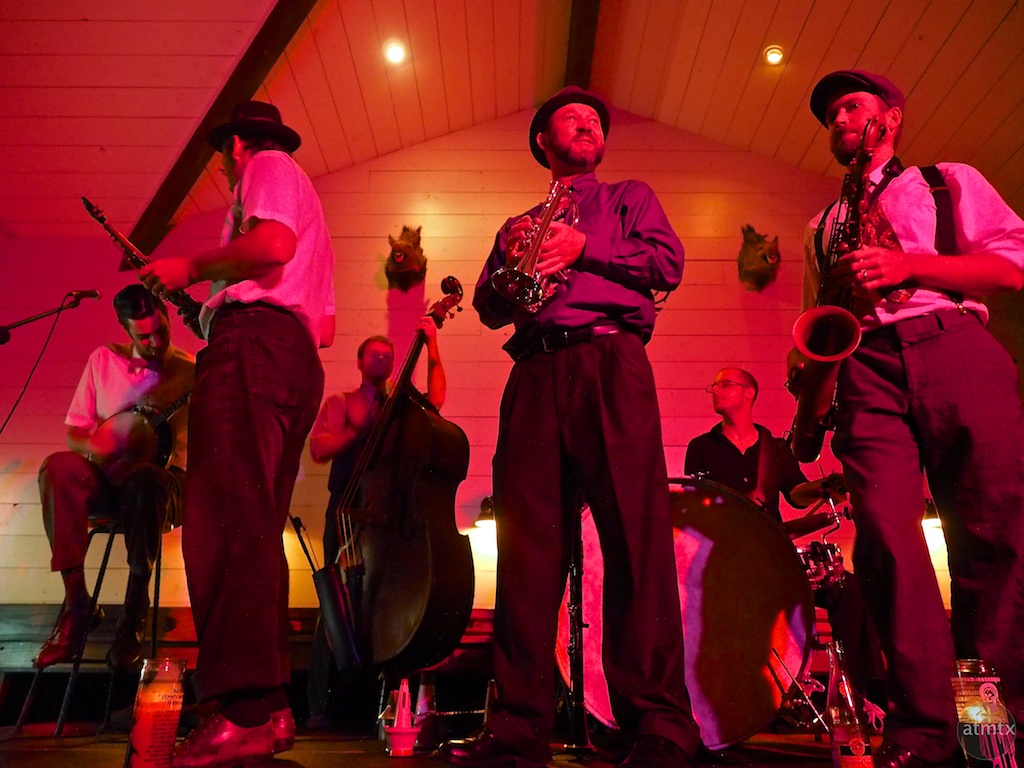 East Side Dandies at the Javalina Bar – Austin, Texas

Beyond the manual focus aids, the camera was received very positively by the photographers. Last meeting someone brought the Panasonic GX7 and along with the E-M1 this week, the enthusiast crowd is being treated to the latest and greatest mirrorless cameras. I sense there is a shift happening in this group. Unlike the general population in the U.S. where DSLRs still rule, members have converted or eyeing mirrorless. Juan Gonzales, who founded Drink and Click, actively uses his Fujifilm X100S. He said possibly with the next generation of Fuji interchangeable X cameras, he is ready to ditch his Nikon DSLR. Several of the other members already use the Olympus micro 4/3 too.

I may be reading too much into this but it was telling when I talked a Nikon user. I was showing him the great features of the Olympus E-M1 when I asked him what camera he used. He said sheepishly that he has the Nikon D600. “Isn’t that the new full frame Nikon?”, I asked with a bit of confusion. “That’s an excellent camera”, I added. “Yeah”, he said “But it’s so heavy”. Wow, I thought. Perhaps the mirrorless revolution that I’ve anticipated for a while, and has taken over Japan, is finally starting in America. While the OM-D E-M1 is large by Olympus micro 4/3 standards, it still compact compared to the typical DSLRs.

East Side Dandies Performs at the Javalina Bar – Austin, Texas

Dancing with the East Side Dandies, Javalina Bar – Austin, Texas

Consider this. The pro grade, all metal, weather resistant E-M1 body with an equally well-built metal and weather resistant 24-80mm equivalent, with a constant f2.8, is smaller than an entry-level DSLR kit. I’ll talk more about this camera in future posts but I can tell you that it out performs my Canon 7D both in shooting and image quality. The mirrorless world is evolving at the speed of Moore’s Law. The old guard, Canon and Nikon, are constrained more by physics (think flapping mirrors) and to a larger extent, by tradition.

Just before I left, Mike, one of the members of Drink and Click brought over his homemade $100 portable lighting rig. He handed me a radio trigger and he held a flash and umbrella combo that works great for impromptu portraits. After a few tries we got the exposure dialed in and I called Christy and her friends to model for us. I increased the ISO to 1600 hoping to capture more ambient light but it was pretty dark. It was a fitting end to a fun night with a very social photography crowd. The E-M1 performed admirably and I’m planning to put it through its paces during the short time I have it. Stay tuned for more E-M1 observations over the coming week.