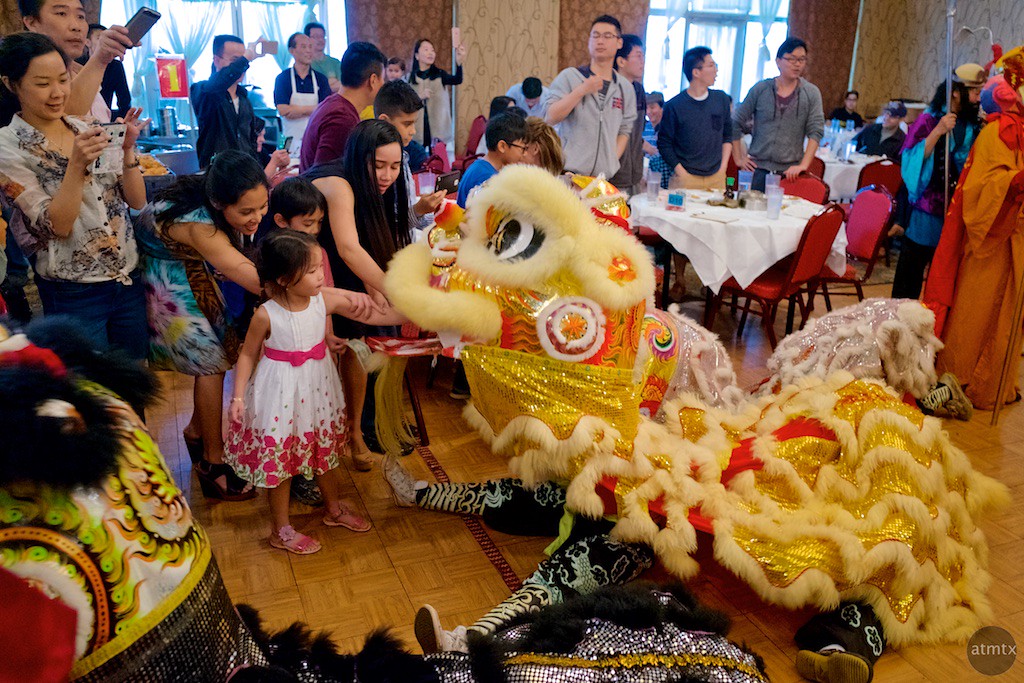 The Chinese Lunar New Year was a couple of weeks ago but the big Austin celebration happened this weekend, larger than ever, spanning two days. I was most interested in the Lion Dance with firecrackers which happened today.

The weather was iffy and I was nursing a slight cold so I almost passed on the entire thing. As fun as these events are, when you’ve been to the same thing 5 years in a row, novelty is no longer your friend. That’s one of the reasons why I shoot with a bunch of different cameras.

I shot last year’s with the newly announced Olympus OM-D E-M5 Mark II. I got decent shots but I didn’t even blog about it. This year, in an attempt to do something different, I attached my long zoom, the 55-300mm to that new Nikon D3300 I bought for sports. I was hoping a bit of telephoto compression would give me a different point of view.

The rains never amounted to much and I was feeling better so, on a whim, I stopped by the Chinatown Center to catch the tail end of the Lion Dance. They had already moved inside so my planned 55-300mm zoom was pretty much useless. Luckily I had also slipped my new compact Ricoh GR, into a side pocket. The chunky point and shoot sized camera fits most anywhere.

The Ricoh has a 28mm equivalent f2.8 prime lens with a large APS-C sensor (here’s a link to the GR II, which is basically the same camera). I’m sure all the smartphone shooters would never suspect that my camera has a sensor that’s over 20 times larger than theirs. All in a package about the same height and width as their phone, though with a depth that’s 3 times thicker.

With a bit of luck, good timing and a superior sensor, I was able to make a decent shot in a challenging indoor venue. Luckily the Ricoh shoots RAW, and with considerable post processing I created this, which is okay, but not totally satisfying. There in lies my biggest gripe with this camera, I’m not very fond of its colors. More about this and the rest of my thoughts on the GR, in a future post.

4 thoughts on “The 2016 Austin Chinese New Year celebration, with my new camera”