The madness that is SXSW started yesterday, amped up considerably with President Obama giving the opening keynote. Austin schools, in the vicinity of downtown, were shutdown at noon. Roads were closed. The city hunkered down. I needed to go into the fray, however, there was a big SXSW Drink and Click with Olympus. With a historic number of RSVPs, it was all hands on deck.

I left hours early and took indirect local roads through the east side. I successfully skirted all the excitement happening in the central core, just miles away. Even before the official 6pm start, the crowds started and kept building. Some unofficial estimates placed 500 – 600 people flowing through. I was mostly sheltered, tucked safely behind, helping with the event. I did venture out occasionally, though, to satisfy my curiosity and to document. 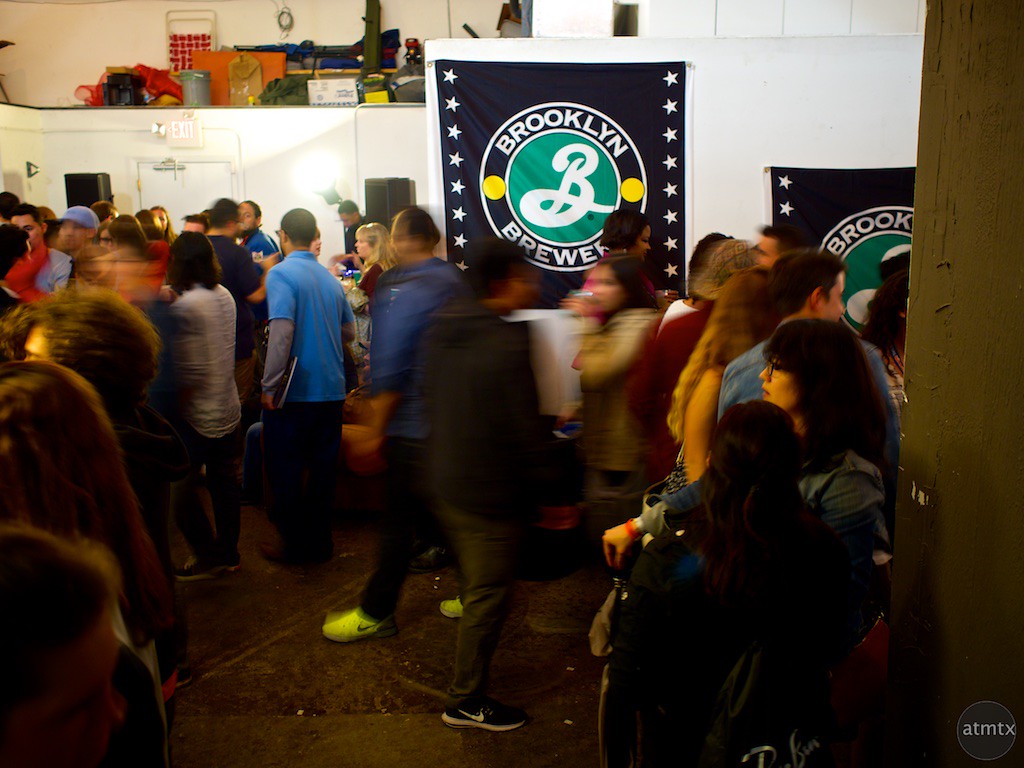 I had my Olympus OM-D E-M5 Mark II with me of course, with my favorite 17mm f1.8 lens. I also brought the Ricoh GR, my latest camera which I’m working hard to tame. It always takes some time to figure out a new camera, to know its strengths and weaknesses and to place it in the pecking order of my photographic tools. The Olympus cameras are at the top, since I’m really familiar with them and they are particularly versatile. The Ricoh GR has been more problematic – mainly because I’m not fond of its default color.

With the Ricoh’s 28mm and the Olympus’ 35mm equivalents, I was set with my favorite focal lengths. I shot both cameras, throughout the night. You can see from the bird’s eye view — the differences. The Ricoh is wider, of course, and with a contrasty pinkish color palette. That’s the Positive Film JPEG preset which I’ve talked about. The color’s different from my usual, but it has a certain look that generally works for me. I certainly prefer that over the default, dingy and flat RAWs.

The second photo is from the Olympus. I shot it in RAW and tweaked it to my taste. The default Olympus RAWs tend to be warm but I can easily adjust them to my preferred color. The Olympus is more flexible and with the in-body image stabilization, I was able to drop the shutter speed to 1/4 of a second to emphasize motion. 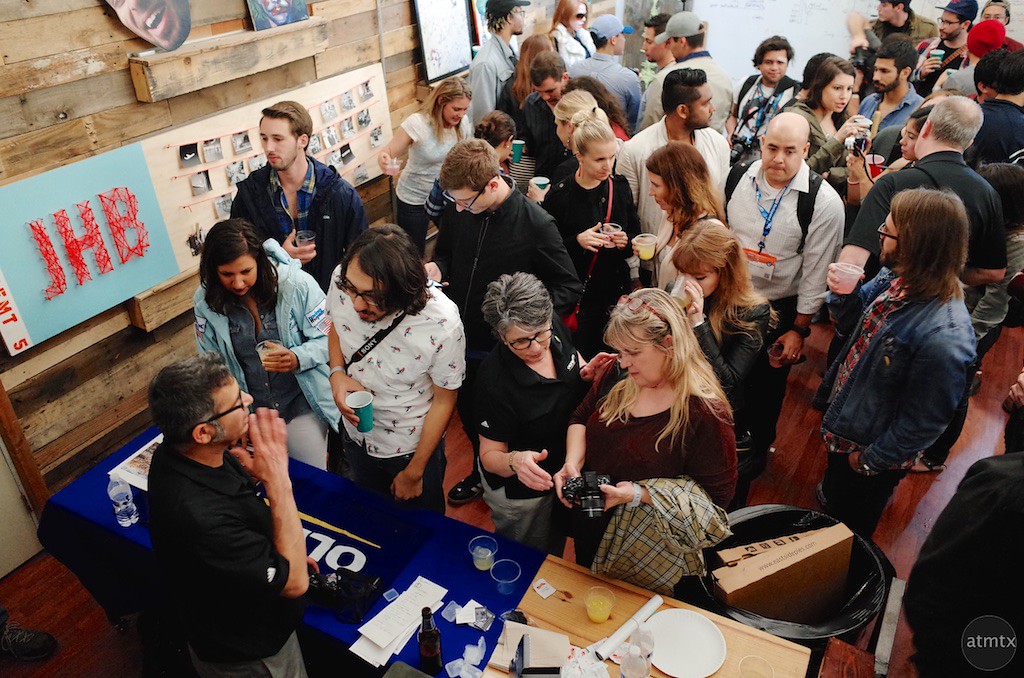 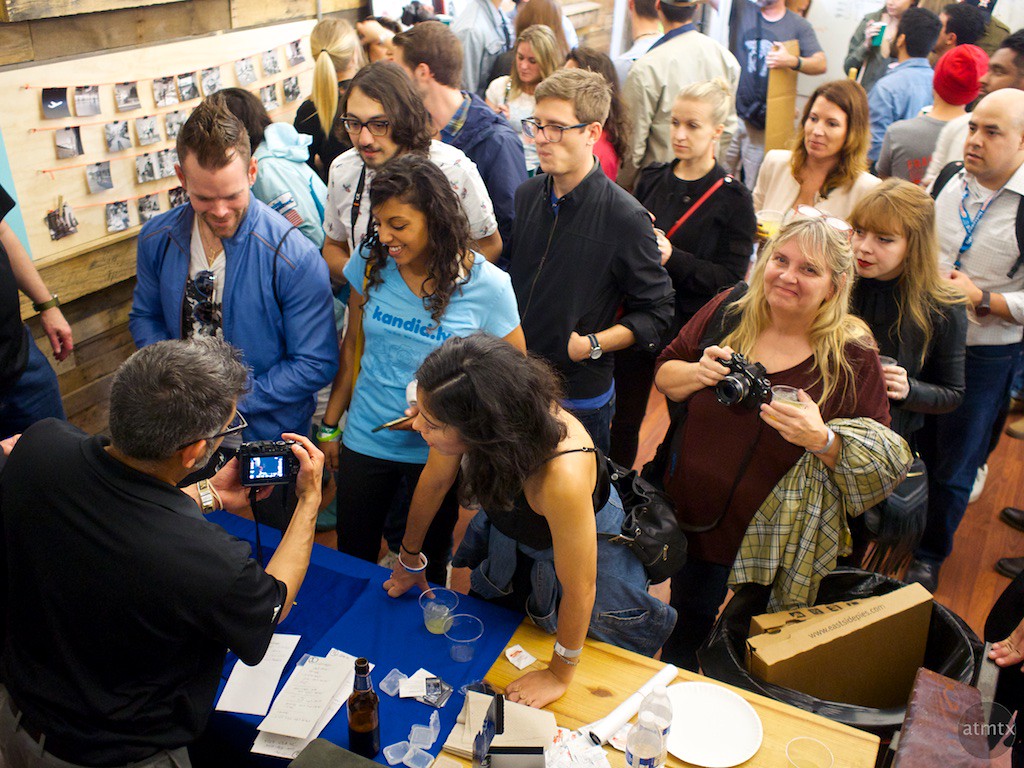 Here are two more with the Ricoh and Olympus. I’m sure you see differences in color and focal length.

Notice the huge lines waiting to try the Olympus cameras. It was certainly hectic and I shot this after it slowed down. After the first wave borrowed the entire inventory of cameras. Charles from Olympus certainly had his hands full. Luckily Tamra from Precision Camera and others were there to help.

As with many Drink and Clicks, there were models. I didn’t do any serious portrait shooting, I wanted to document. The folks appear to enjoy themselves testing out the Olympus cameras. 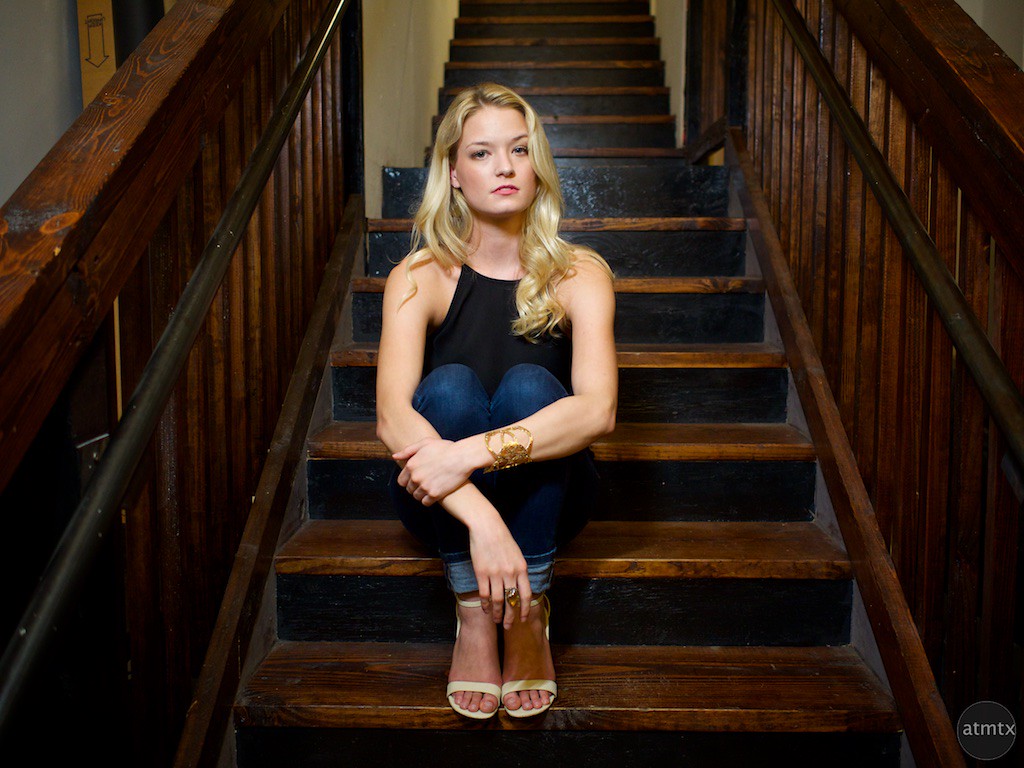 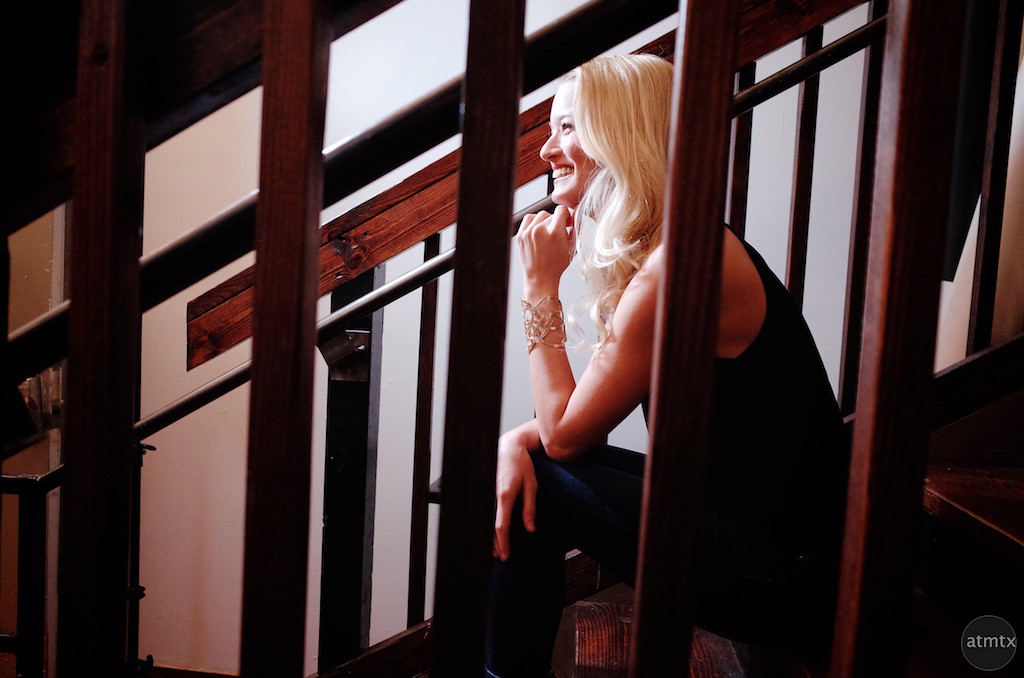 Here’s two of Emma that I shot from different points of view and with the two cameras. I like both for different reasons. The first one, shot with the Olympus is more conventional, and the color, more accurate. The 35mm equivalent focal length works well to capture the model in her environment.

The second one, from the side, takes better advantage of the wider angle. It’s a bit more unconventional with its framing and with the quirky Ricoh Positive Film color. 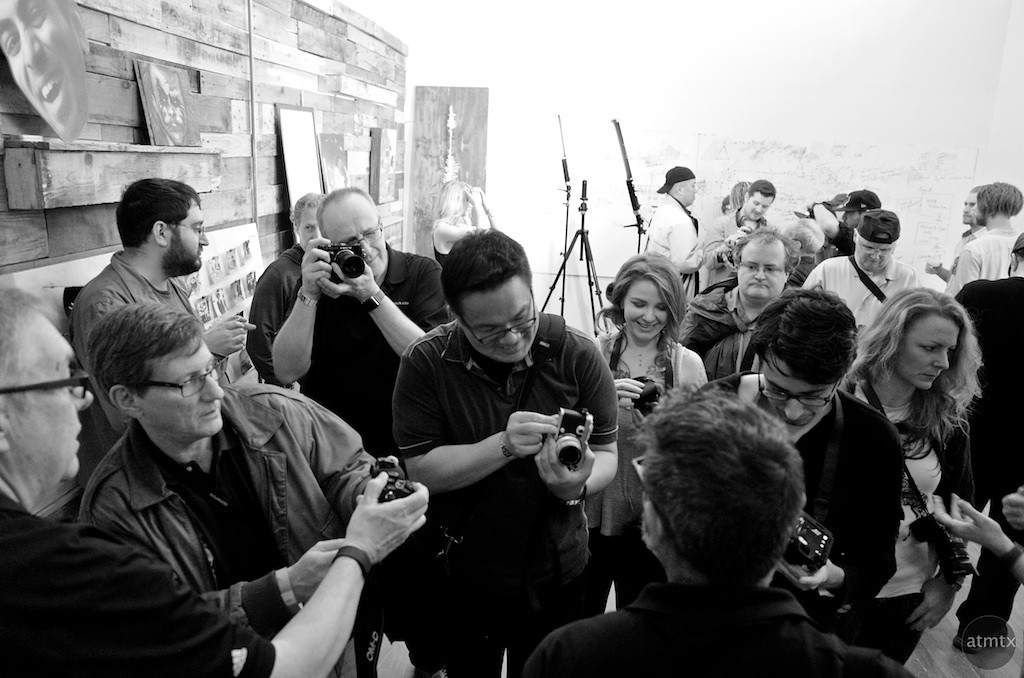 The Ricoh Positive Film color, for me, falls apart over ISO 3200. The JPEG processing gets too harsh and the noise is pushed to uncomfortable levels. I actually shoot the GR in JPEG and RAW. While I dislike the color of the RAWs and struggle to get a color that I like, it works well for black and white conversions. The GR is also sharp, particularly in RAW, which is an added benefit. These two black and whites are gritty and noisy but work decently, I think. 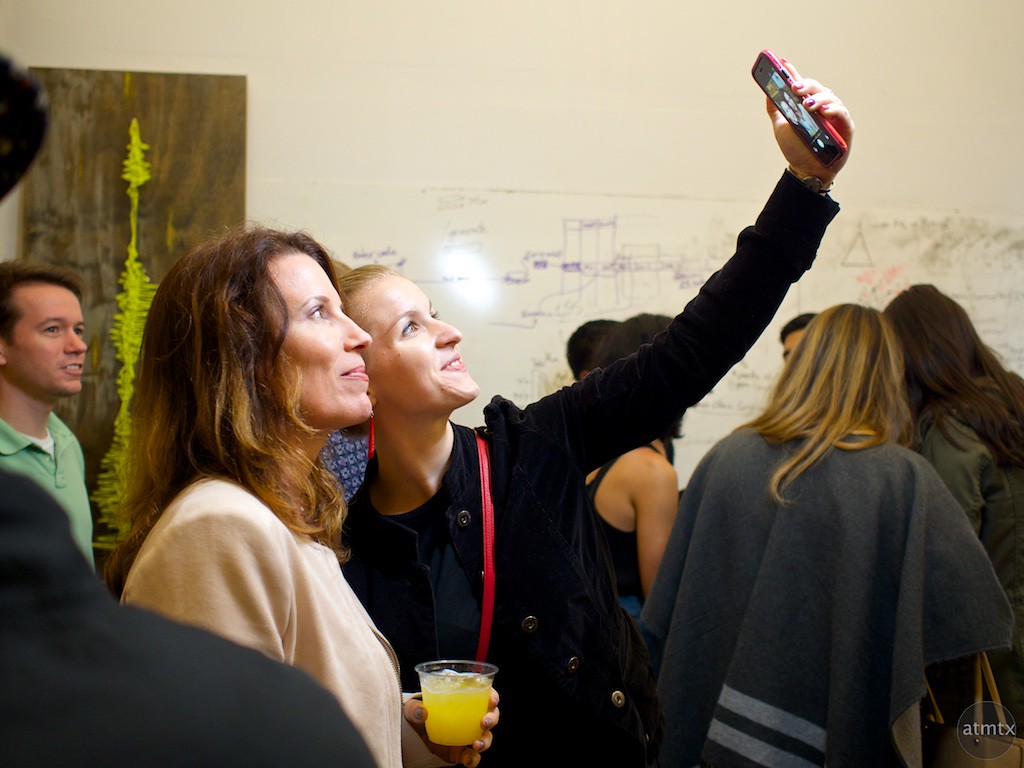 Most people these days, shoot with their smart phones. But this might have been a rare night where I saw more people taking pictures with real cameras instead of their multi-purpose communications device. I wonder how many are truly thinking of stepping up to such cameras.

I did talk at length with one guy that was planning an elaborate Safari vacation. He understood that a normal point and shoot or smart phone wouldn’t do. He was thinking of getting a full mirrorless system and learn how to use it, before heading to Africa on his once in a lifetime trip.

Regardless, many people seem to enjoy playing with the Olympus OM-Ds. I quietly captured these images as they explored. 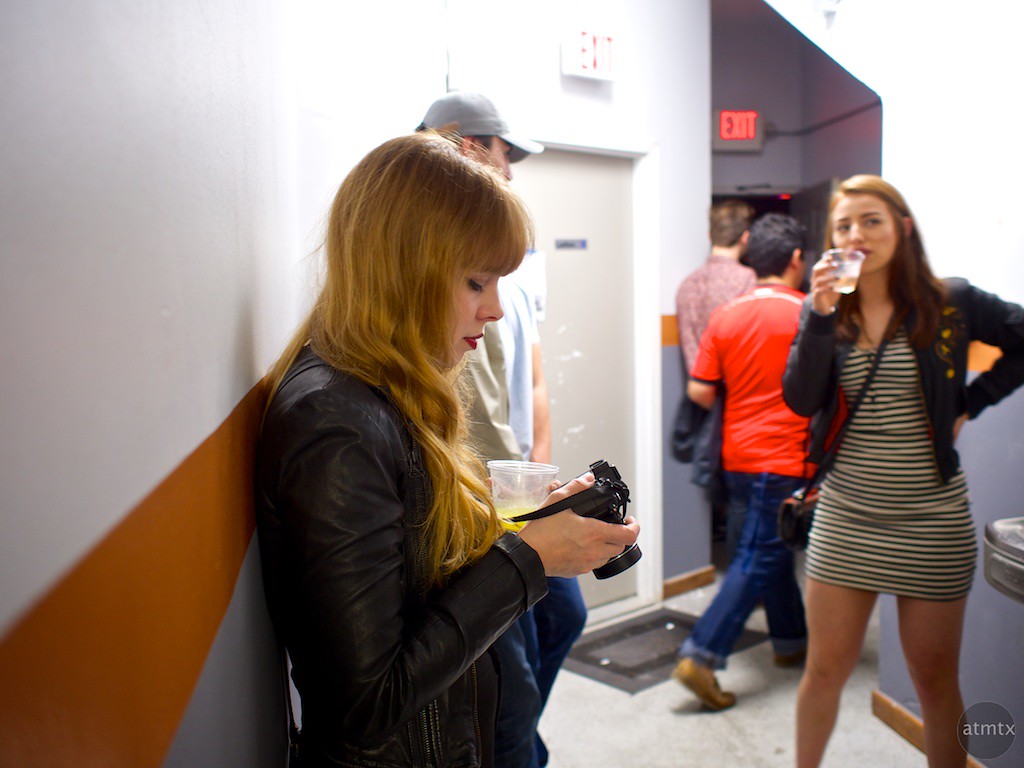