With a record 7 downtown visits during SXSW this year, even I needed a breather from photography events. That was until I realized that Rodeo Austin, which happens around the same time, was about to end. I made it there on the last Friday, just before they headed out of town.

I did a lot of shooting as usual with two cameras. For today’s post, I wanted to concentrate on motion blur — again. As you may recall, I did a post on motion blur in downtown Chicago. The blurred streaks are very effective in showing motion and I’m having fun using it selectively. In Chicago, it wonderfully emphasized the busy and dynamic big city. Here at a county fair, it’s a nice way to show spinning rides. And boy, there was a lot spinning going on. 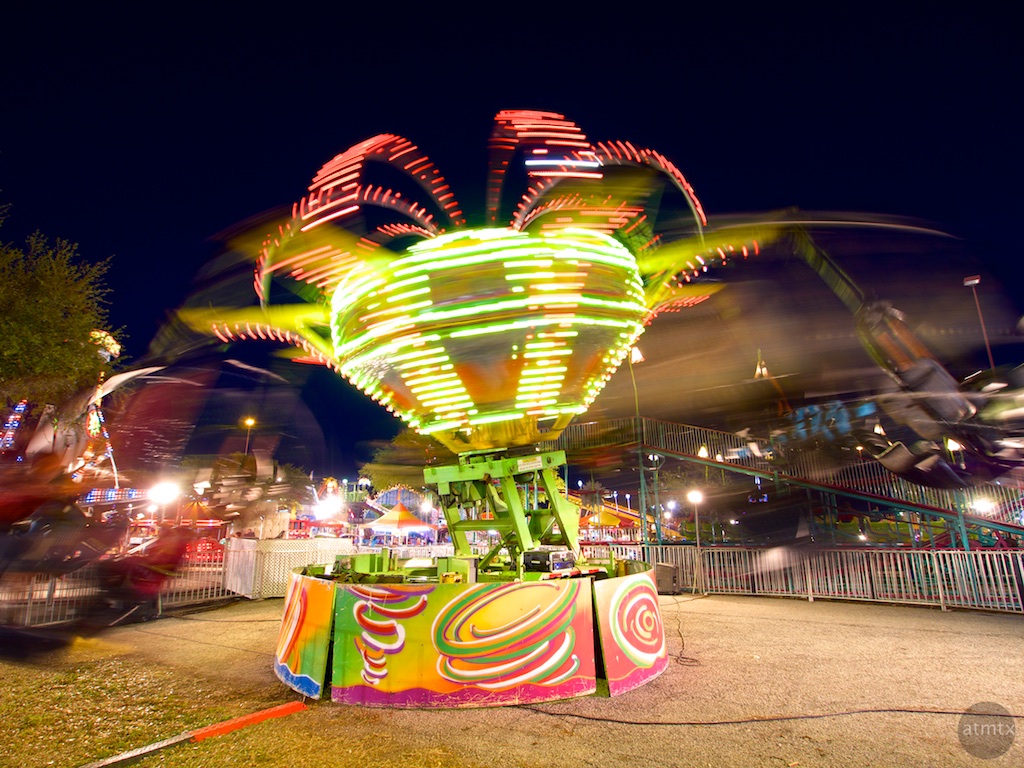 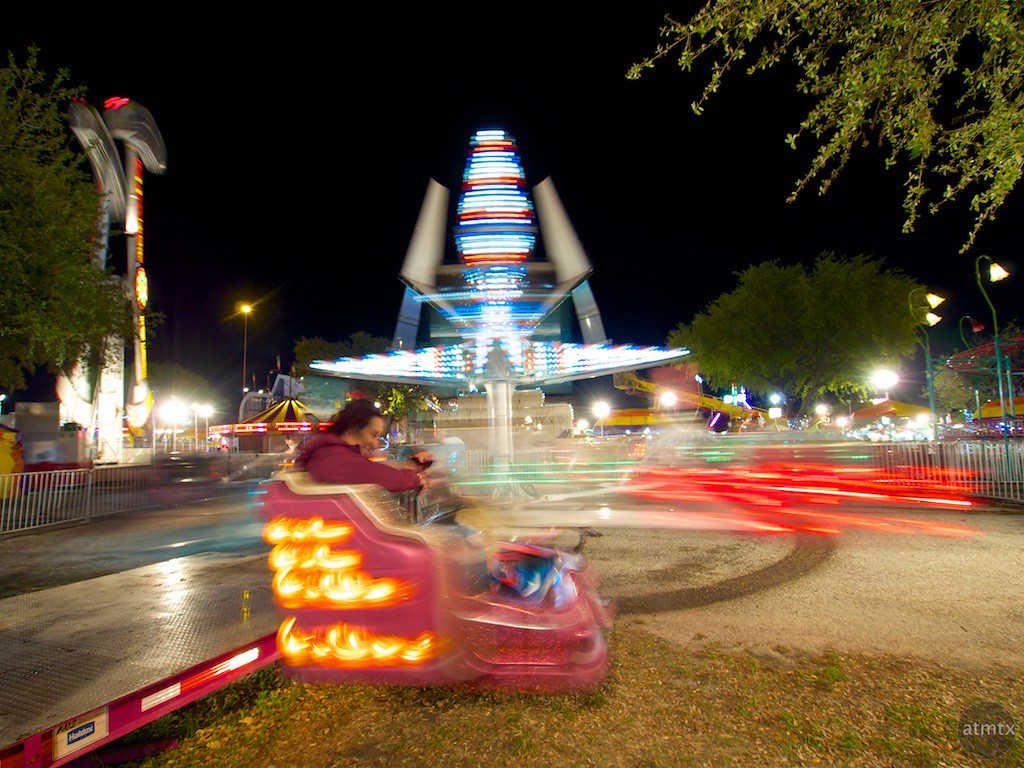 People seem to enjoy paying good money to have their innards rearranged. Me, I’m perfectly satisfied on the ground, but love the colorful blurred lights. I’ve done these kind of shots before, nothing ground breaking photographically, except in the equipment. You see, in the past, I needed a tripod to do these kind of photos. All of these images were created free hand using in-body image stabilization on the Olympus. It works very well, most shutter speeds where 1/3 to 1/5 of a second. 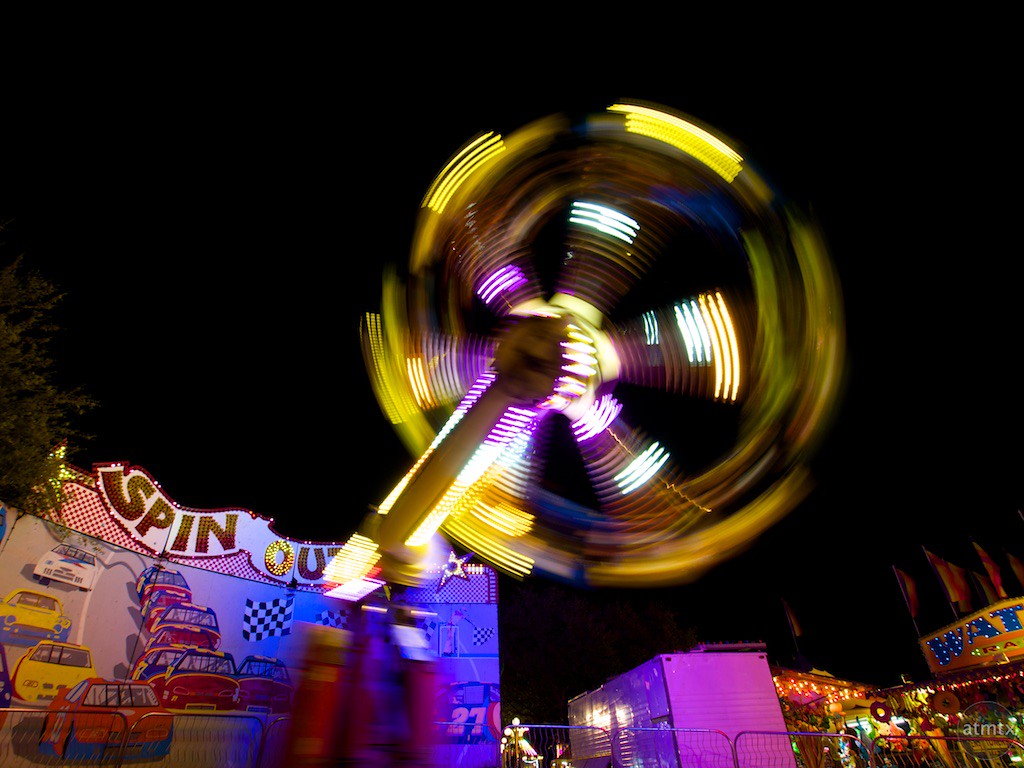 Not using a tripod is so wonderful on a number of levels. There’s the obvious benefit of not having to carry around a bulky and heavy piece of gear. But there as several more, lesser known perks.

You can shoot faster. No need to set up and adjust and readjust a temperamental set of sticks. You can compose better since you can quickly tweak your position and get more varied angles. Finally, you attract less attention since often security people believe that you are a professional, if you use a tripod.

Here’s an example, camera positioned over my head, to get the right angle and to shoot above the railing. 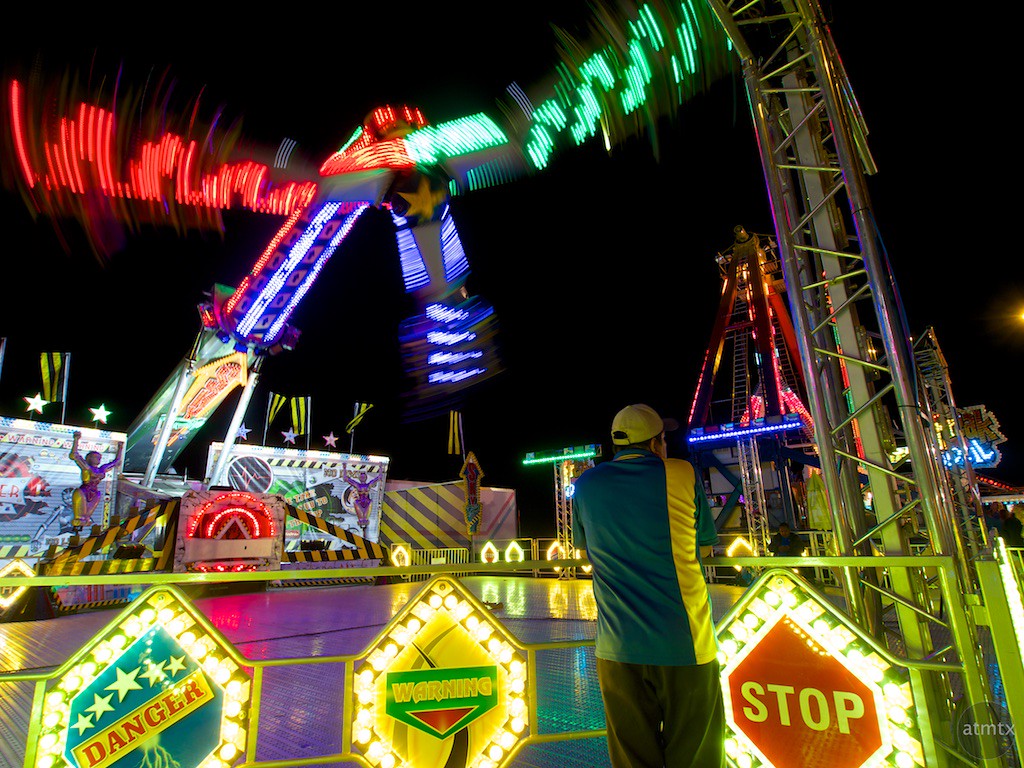 With these two, I shot down low to get a dramatic angle. The tilting screen allowed me to shoot these without lying on the ground.

It also helps that I used a wide-angle lens. The Olympus 9-18mm gives me a 18mm equivalent on its widest setting. 1/3 of a second is impressively slow but with a 18mm it’s a little less than 3 stop of image stabilization. The simple rule is, the wider the lens, the slower you can make the shutter speed, without noticing camera shake.

Olympus claims up to a 5 stop image stabilization (IS) on the OM-D E-M5 Mark II. That’s most likely for telephoto lenses, which benefits more with IS. Even on wide-angles, however, I’ve pushed it to 1 second handhelds. I don’t shoot often at those speeds, however, since but my hit rate falls considerably.

It’s pretty amazing, if you think about it — what’s possible these days with advanced cameras. The 1/3 – 1/10 of a second shutter speeds kept my ISO at 200 to 1250. Well within the limits of high image quality. Most important of course, the technology allowed me to easily create images that I had in my mind’s eye.