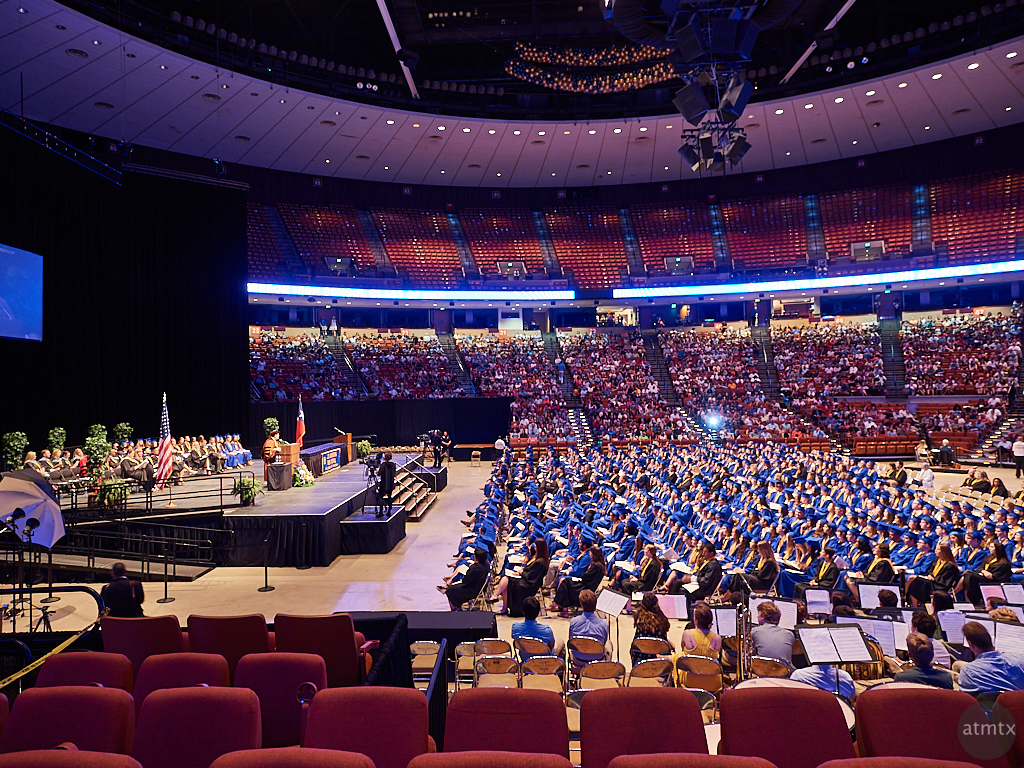 Over the last several years, starting with the 12-40mm f2.8 Pro, Olympus has built their pro lens collection. The 12-40 Pro was released with the original OM-D E-M1, and since then, they’ve filled out their collection with six more lenses. The pro lenses feature a beefier metal build, weather sealing and larger apertures. While I only own the 12-40mm Pro, over the years, I’ve played with every one of their lenses.

Last Friday, during my son’s high school graduation ceremony, I got to use two pro lenses that I rarely touched — the Olympus 40-150mm f2.8 Pro and the 300mm f4 Pro. Since I tend to shoot small prime lenses, and usually at shorter focal lengths, I generally wasn’t interested in the pro telephotos. They are big, by Olympus standards, and expensive. But these two lenses proved invaluable during the graduation ceremony and I’m really grateful that Olympus let me use them.

As you can see from the photo above, the Frank Erwin Center, on the University of Texas campus, is a substantial facility. It’s a general purpose arena that hosts basketball games as well as concerts. I got there early and managed to get the best seat on the left side of the stage, so that I could shoot the graduates as they went on stage. For some reason, the section just below me was not open for seating. This image is at a 24mm equivalent shot with the 12-40mm Pro on my OM-D E-M5 Mark II. 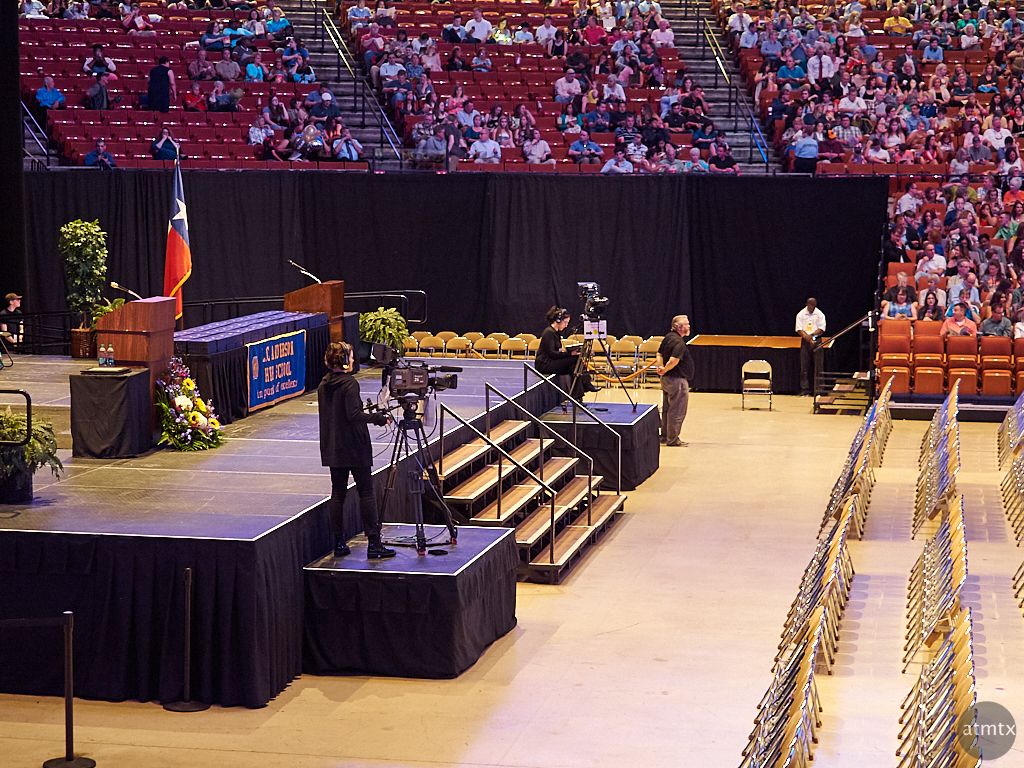 Here’s the view of the stage area at a 80mm equivalent. I used the PEN-F with the 40-150 Pro lens. I had time to spare before the ceremony, so I put the lens through its paces and I found it easy to use. This is a hefty lens by micro 4/3 standards, though not that big compared to full frame glass.

It worked well on the PEN-F, even without a beefy grip. Of course, it was a two-handed operation and most of the weight was carried by my left hand, holding the lens. The right hand was used more for aiming, changing the camera controls and hitting the shutter button.

Here’s the same camera and lens at a 150mm, which was its maximum focal length. At a 300mm equivalent, I used this focal length for the “money shot” of the students walking on the stage. It gave me enough details of the students, while it allowed for context by including part of the surrounding stage and the other students.

The in-body image stabilization was so good that I didn’t have to factor in focal length when selecting the shutter speed. Here, I shot at 1/25s, and the results were excellent. These kinds of shots where easy since there was little movement and plenty of contrast for speedy focus.

Focusing was more challenging, however, than shooting with a wider focal length. For best results, I needed to have my focus point on a contrasty area. Focus speed is quick but can hunt (very quickly) when there’s not enough contrast.

Shooting movement, at least in this non-optimal indoor lighting, was a bit more challenging. I actually used manual exposure, which I rarely use so that I can optimize the shutter speed, aperture and ISO. What worked best for me was ISO 2500, f2.8 and 1/100 of a second. That allowed me to keep a decent shutter speed to minimize motion blur, while still keeping an acceptable ISO.

Finally, here’s the view with the Olympus 300mm f4 which has a 600mm full frame equivalent. Yesterday’s image also featured this lens. I opted not to use this lens during the ceremony since it would have framed too closely. It would create a full body portrait, and would exclude too much of the surrounding context.

The lens has built-in image stabilization that I think works in conjunction with the camera’s in-body stabilization. Either way, I was able to shoot this 600mmm equivalent at 1/13 of a second. It was an interesting test but would have been impractical for the ceremony.

I also borrowed the 1.4x extender which would have produced a 840mm focal length, but I didn’t even test it. It was more than I needed and it also imposes a one stop penalty — I needed all the light that I could get. The extender would be a wonderful addition for outdoor wildlife shooting, however.

All and all, it was a very successful outing with the big pro telephotos. I created the shots of my son and his friends that I was hoping to. And, I did so without much practice. I always find that it takes at least a few weeks to become fully comfortable with a lens. Thanks to the image stabilization, shooting with these hefty telephotos was easier than I thought.