First up on my photowalk with Dan, after an awesome pizza dinner, a designated San Jose Landmark. The future is uncertain for this now closed theater, which wowed customers back when it was built in 1964. Dan suggested that we record it for posterity, just in case it’s town down, which is a distinct possibility.

A photo of one of the domed theaters is below. This one sprouted a pair of extra domes after its original construction, to support a multiplex experience.

Dan was quite enthusiastic about the building, though I didn’t share in his excitement. He’s probably influenced by his years of fond memories of this place. 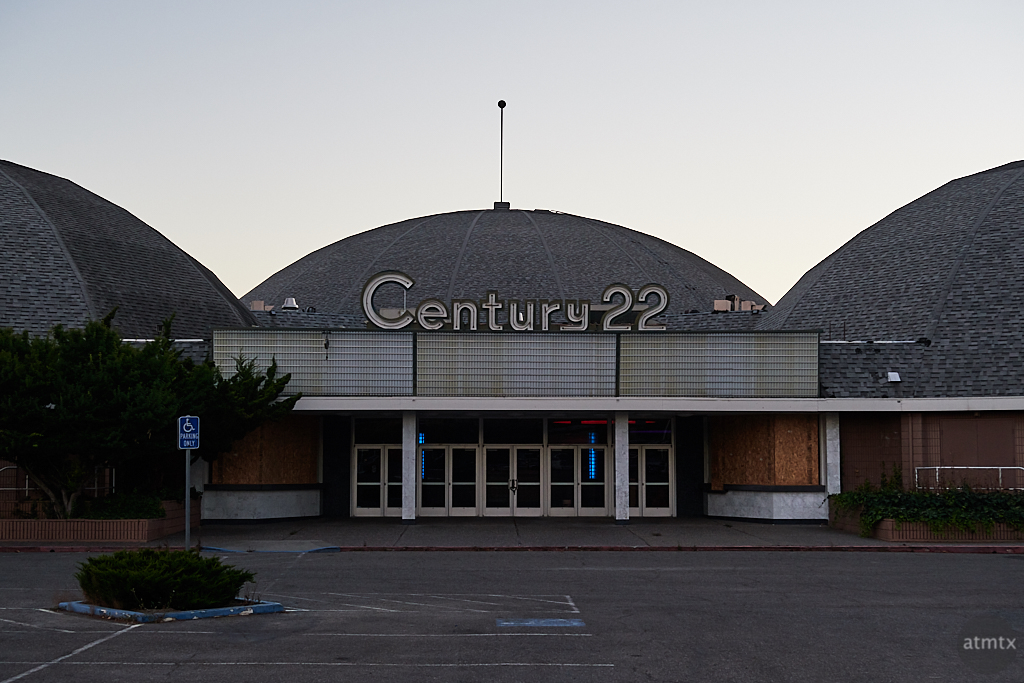 As an impartial outsider, visiting from Austin, I found the buildings quite ugly, actually. I like the shape of the domes but those asphalt shingles really made the place look cheap. I suspect that was a more recent money-saving update. There’s a really nice photo essay at the Verge, which features historic photos.

Photographically, I would have loved to shoot the inside. Unfortunately, we didn’t have access. I vaguely remember seeing one or two movies here about twenty-five years ago. As I recall, the large circular interior was really interesting and very different from any other theater I’ve visited.

The giant marquee was more of an interest to me, than the buildings. I particularly like the Century 21, 22 and 23 signs. I really would love to see them lit up in neon, but I suspect they are no longer turned on.

As you can see from the first photo, the facility has been relegated as overflow parking for a successful shopping development across the street called Santana Row. That was our next destination on our most recent San Jose photo walk.

2 thoughts on “A San Jose Landmark”