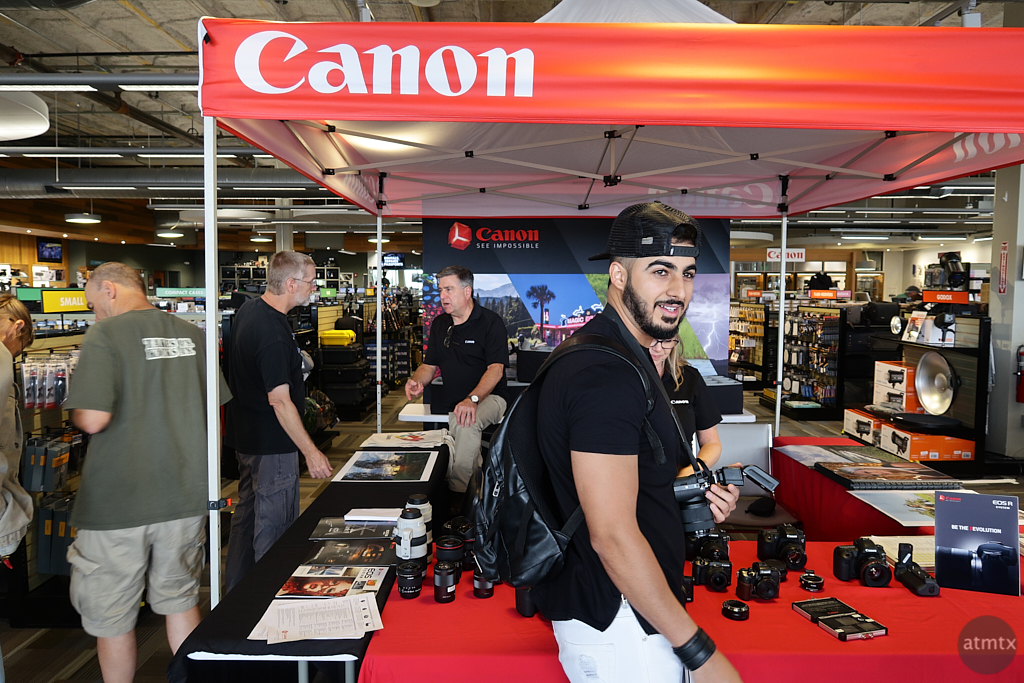 A few weeks ago, Precision Camera had a Takeover event, where Canon sponsored several activities throughout the store. Located up front, a large red Canon canopy beckoned with the latest gear, including their new full-frame mirrorless, the EOS R. I got to play with the R for about 10 minutes.

My first reaction, Canon managed to create a mirrorless camera that feels like a DSLR. And, that’s not meant to be a compliment. There’s an unexpected ca-chunk when firing the shutter. It’s not as loud or annoying as the first generation Sony A7, but noticeably present for a mirrorless. If it wasn’t for the thinner body, you can almost swear there’s a flapping mirror in there. Perhaps I’m being a little hyperbolic, but not by much. Between the focusing and the shutter pressing, the EOS R just doesn’t have that quiet and fast electronic mirrorless feel.

It does have an EVF and rear LCD, so it does work like a mirrorless. No more legacy optical viewfinder to contend with, thank goodness. The build is sturdy and there’s a strong sense of quality. The menu system is like other Canons, which is a very good thing. I think Canon’s user interface is one of the best around. It didn’t take me long to figure out the camera. All in all, it is a very business like camera that you would expect from Canon.

The haptics are generally strong and superior to the Sony A7 series. However, the thinner than DSLR body also has a thinner grip. It’s more than adequate for smaller lenses but the RF 24-105mm f4 L “kit” lens seems front heavy for me. A deeper DSLR style grip would help. Perhaps it’s my smaller hands that don’t have the requisite grip strength. I was able to use the camera one-handed, but it felt a lot better assisting with the left hand. My Canon 6D with the larger and heavier EF 24-105mm f4 L feels better in hand because of a more substantial grip.

The EOS R lacks a traditional mode dial and has a new touch sensitive multi-function bar. So far, I’m not convinced these changes improve things in a significant way. In fact, I kept on hitting the multi-function bar by mistake, which annoyingly changed settings for the worse. It almost seems like Canon added the new hardware controls gratuitously to make it feel like a new and modern camera. Since the R feel so much like a DSLR anyway, why not just keep the same standard DSLR controls?

The EOS R seems like a solid effort and it might entice a Canon user who is curious about mirrorless. To Canon’s credit, all of their EF lenses are compatible via an inexpensive adapter. The good news is, the EOS R is no EOS M. The original EOS M was probably the worst mirrorless camera ever introduced.

With a Canon 6D body and a half a dozen EF lenses, I would be the ideal target for this camera. But, the R lacks in-body image stabilization and the feel of the camera is not compelling enough. And though I haven’t use the Canon EOS R and Nikon Z7 side by side, my quick impression of Nikon’s new mirrorless is more favorable.

A Canon user friend of mine was ready to buy the EOS R, but was so disappointed by it, he ended up moving over to Fujifilm. Another Canon user acquaintance was also not impressed.

My bottom line reaction after playing with the EOS R? Meh. Canon now appears to be serious about the mirrorless market and maybe the first generation R is good enough to please the faithful. But for someone like me, who has used mirrorless cameras for eight years, there’s a lot more Canon will have to do to convince me.

One thought on “Playing with the Canon EOS R”