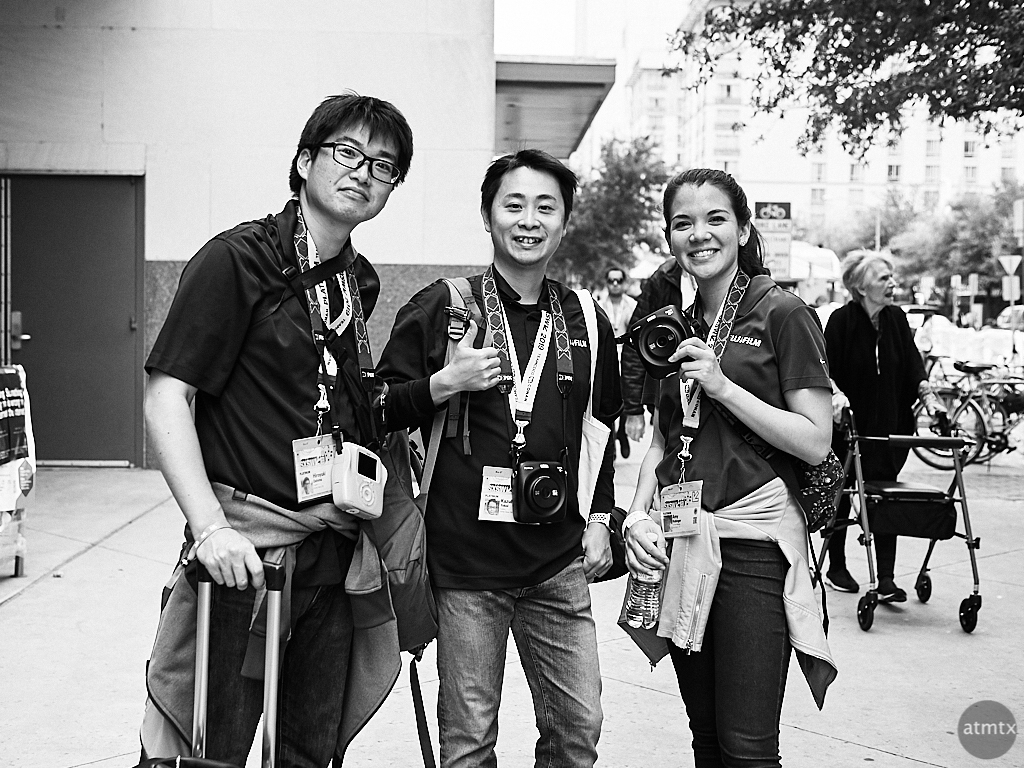 These guys and gal are from Fuji but they are not the actual “Fuji Guys” which is a YouTube Channel out of Canada. But, it makes for a fun title. I saw these folks during this year’s SXSW as I captured things of interest. I’m sure they were a bit baffled by my enthusiasm to create a portrait. I probably even blurted out “Fuji Guys” as I saw them. They were more than happy to oblige, posing for this crazy guy with an Olympus PEN-F of all things.

I have fond thoughts of Fujifilm actually, even though I don’t talk about them much on the blog. Back in 2014, I shot nearly a whole year with mostly the Fuji X100S, which was a big present to myself on my 50th birthday. I got really good at seeing the world at a 35mm equivalent. I also shot an Olympus PEN E-PM2 for urban landscapes and HDRs. After I bought the Olympus OM-D E-M5 Mark II and the 17mm f1.8, the X100S was retired to my display shelf.

In my large collection of cameras, I own many Fujis, actually. The X100S, the XF1 and the legendary FinePix F31fd from 2006. I have two F31fds, one bought new and one I found at Goodwill for $5. I also have an Instax Mini 90 and the Instax Wide 210, which gets my vote for the ugliest camera. Next to Olympus, Fuji is probably my favorite camera company. Though, unfortunately, their well-regarded X line of cameras doesn’t have in-body image stabilization, which is really important for me (the giant video focused X-H1 doesn’t count).

Sometime in the future, I’m considering bringing the X100S out of retirement to see what it will do. It’s not nearly as capable as my modern Olympus cameras, but the X100 line has a special something that the other Fuji X cameras don’t seem to have. Even now, I’m attracted to the X100F, the latest incarnation, though not enough to pay $1300. X100S is slower and a bit buggy, but it’s free, which is a good thing.