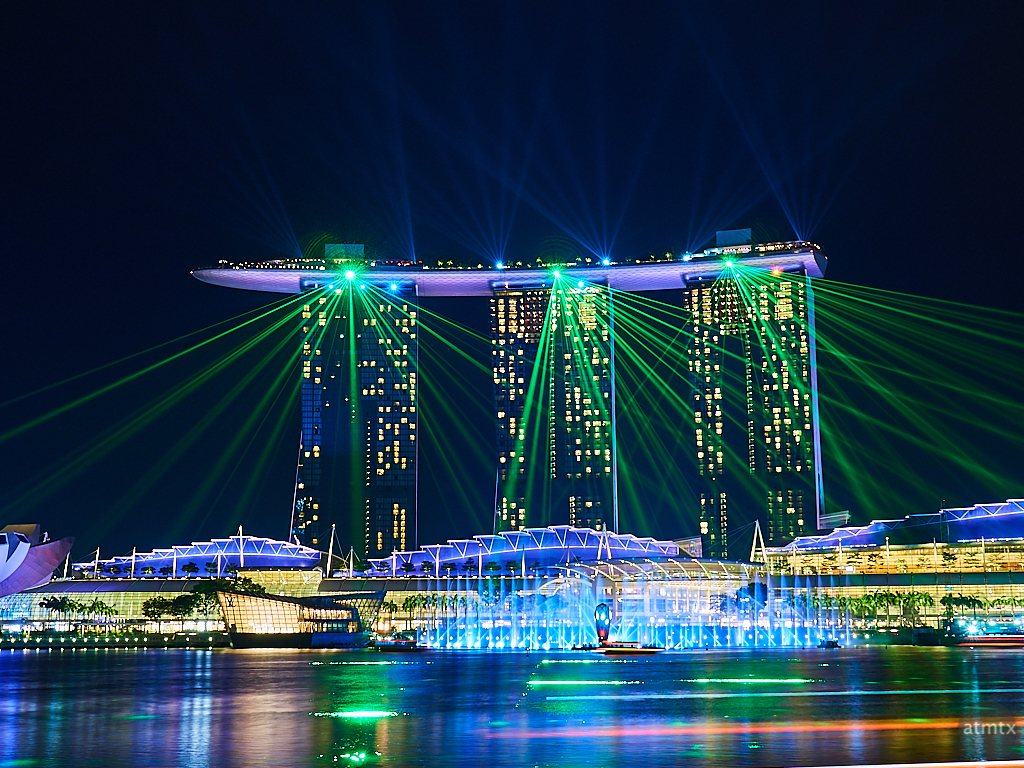 A few days ago, I mentioned that there was one particular photograph that I wanted to make on this last night in Singapore. This is it. The Marina Bay Sands hotel during the twice nightly light show. Three weeks ago, I featured a closeup of the light show from the hotel, on the other side of this bay. I was disappointed by that photograph. While it was colorful and fine as an image, it didn’t truly capture the essence of that performance. I believe today’s is a lot better. If fact, from this vantage point, it was even more dramatic than I thought.

Dancing waters, lasers, colorful lighting, and dramatic architecture. What’s not to like. The only thing I was missing was fireworks, which, unfortunately, they didn’t have during that performance.

In the past, I often approached urban landscapes using a super-wide focal length — using my inexperienced “one size fits” all approach. But, a zoomed-in framing works better, and I used a 44mm equivalent. This was a 10-second exposure on a tripod, which worked well. However, I made many 10 second exposures throughout the show and picked the most dramatic.

There’s an interesting distortion of time courtesy of my once a day blog posts. That light show photo that I posted three weeks ago happened just 24 hours in the past when I was actually in Singapore. I shot that photo on the 2nd night of my visit, and today’s photo was made on the 3rd night. Which means, when I originally made the first light show photo, I had no idea I would be making today’s version, of course. But, with hindsight over a year later (I made these photos in December 2018), I could combine these disjointed photos into a cohesive story.