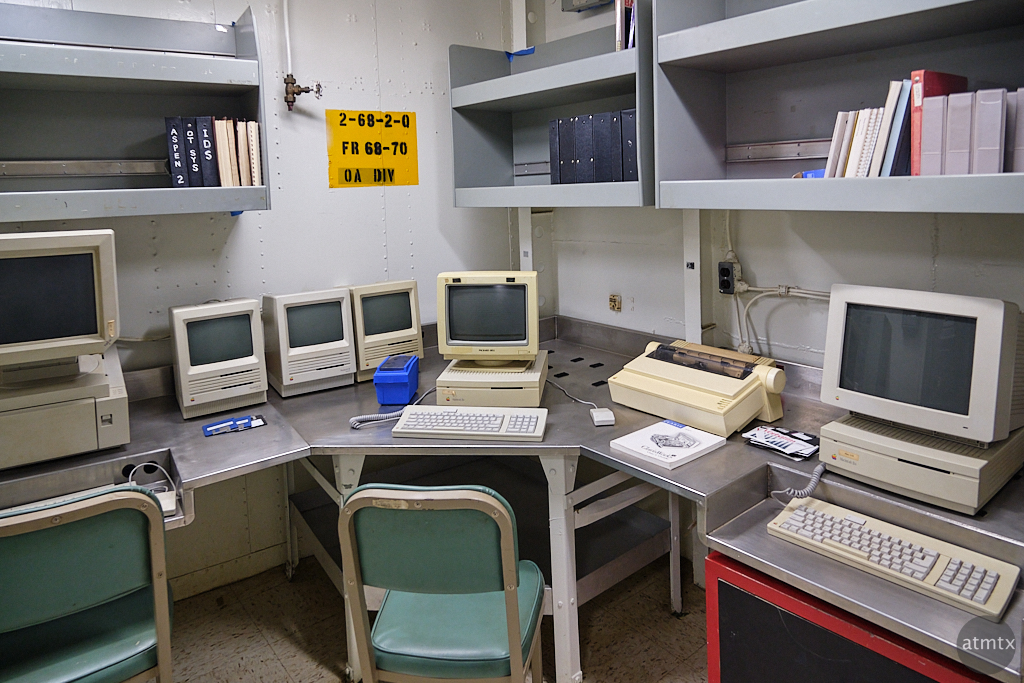 I feature an ancient computer center for my last post from the USS Missouri. Surprising on a couple of levels, as I will explain.

Missouri is an old World War II-era battleship. As you would expect, many of the systems are ancient and primitive. Even the bridge didn’t have any modern electronics. I was pleasantly surprised by this comparably new computer center. Even more unexpected, they were stocked with Apple Macintosh computers.

In the late 1980s, Macintoshes were used primarily by the creatives — artists, musicians, and the graphics department in corporations. They were not common in big enterprises. And the U.S. Military is one of the biggest enterprises around. I would’ve expected IBM PCs instead.

I’m familiar with these computers, too. The three all-in-one units on the left side are Macintosh SE models first released in 1987. I owned one back then. Mine was a dual floppy model, with each drive holding 800KB per disk. I got a third party to specially add an internal 20MB hard drive. As a reference, the full resolution 24MP JPEG image of this picture takes up 18MB of storage. That means I could fit one of these pictures on my Mac SE hard drive. The other two Macs are newer. The Macintosh IIsi was released in 1990.

I was initially confused why this WWII-era battleship had Macs on board. I later discovered that the USS Missouri was reactivated during the 1991 Gulf War.

2 thoughts on “Unexpected Orchard of Apples”