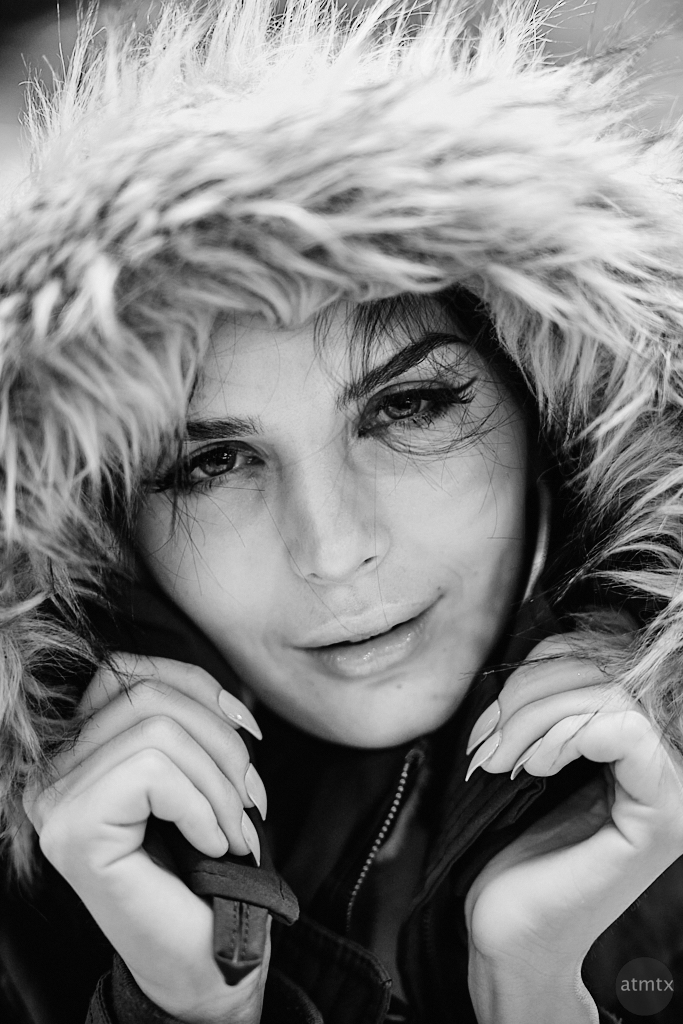 I’ve mentioned the new lens I bought for the Fuji X-System, the 50mm F1.0. That’s the lens I used to make test portraits at Precision Camera, which I featured over the last several days. And while it’s just a lens, there are implications for a shift in gear happening in 2023. Let me explain.

The Fujifilm 50mm f1.0 is a chunky lens for the X-System. Mounted on the Fuji X-E3, one of the tiniest X cameras, it looks almost ridiculous. However, it works better than I thought on this five-year-old camera. The aging eye-tracking locked into Tanya’s eye even at this close distance.

The 50mm f1.0 is a specialized lens primarily for portraiture and is one of only two 50mm f1.0 lenses that autofocus. The other is the discontinued Canon EF50mm f1.0. Since Fujifilm designed it for APS-C, it’s not quite as impressive as the Canon. Still, a quickly focusing f1.0 is a rarity and thus pricy. At $1,500, it’s one of Fuji’s most expensive APS-C lenses.

I shelled out the bucks for essentially Drink and Click events and the occasional portraits at Precision Camera. These portraits are a fun diversion from my usual city, architecture, and travel-related photographs. While not my primary subject, I enjoy the social interaction at these events. Thus, I even considered buying the GF80m f1.7 lens for the medium format GFX system — an even pricier lens at $2,299.

Then my perspective shifted. First, while I enjoyed using the GFX 50S II throughout 2022, and faster than the GFX 50R (my first GFX), it’s still not an exceptionally focusing camera. Making portraits at Drink and Click was a chore, especially using the slow-focusing GF63mm f2.8 lens. The marginal light, often at night, added to the challenge — it was not an optimal experience. Buying the even more expensive GFX 100S would’ve improved the situation, but I wasn’t going there. It’s not worth the return on investment for a once-in-a-while hobby activity.

I’m also running into storage challenges with my ever-increasing Capture One library — my 2022 library grew to a shocking 1.45TB. Each 51MP RAW file from the GFX is about 120MB which adds up quickly during Drink and Click portrait sessions. It no longer made sense to devote this much space to casual portraiture.

Thus, I’ve decided to double down on Fuji’s APS-C X-system for portraits. The Fuji 50mm f1.0, with its super-shallow depth of field and pleasing bokeh, would be my portrait lens. I saved money over the GFX equivalent, and I get faster focusing with smaller file sizes. It’s a set of trade-offs that made sense financially and maximized the fun factor.

This second picture is the color version of the same photograph posted at the top. I had a quick and easy time making this arctic-tundra-like portrait at Precision Camera. The old Fuji X-E3 is slightly better than the GFX 50S II for overall focusing speed. I’m also planning to upgrade to a new X-body that will give me even better performance.

Am I moving away from the Fuji GFX system? Yes, for the situations described above. Though, the GFX is still ideal for high-quality architecture and landscapes. Since I own several Fujifilm cameras, it makes sense to optimize each for what they do best while keeping a keen eye on the fun factor.

After a two-month pause on my New York City coverage, I’m starting it again. Believe it or not, I still have loads of pictures from the Big Apple that I made during my June 2022 trip.