I mentioned that I was in Madison and Chicago last week. And to answer a follower’s question, no it was not for business, rather, it was for pleasure. Though going to Wisconsin in the winter is not particularly pleasurable but an abnormally warm winter spared us from much of the feared midwestern cold.

Actually, I wanted it to be cold. That’s why we picked our winter break to visit. You see my older son, now a junior in high school, is starting to look at colleges. He is under the impression that he likes the cold, of course being a Texas boy, I contend that he really doesn’t know what cold is. I was hoping that a blast of truly frigid weather would convince him otherwise. Unfortunately, record warm meant Madison was in the upper 30s and Chicago was even in the 50s.

We visited three campuses, University of Wisconsin at Madison, University of Chicago and Northwestern University. All three are great schools and all three were very different. But I’ll leave my impressions for another post.

I’ve always heard good things about Madison. Sort of like Austin 40 years ago, when it was an overgrown college town plus a state capital. Austin has exploded in recent years and I was surprised that it now ranks #11 by population in the U.S., at more than 900,000. In the same rankings, Madison is still a modest 250,000 which gives it a #83 ranking.

But rankings can be deceptive. What I found in Madison was a compact and dense urban core that, in some ways, seems more city like than Austin. Sure, Austin has boastful 30 – 50 story towers, but it still has a lot of underdeveloped lots. In Madison, I saw a healthy mix of 12 story apartments, single family homes and neighborhood retail that made for a charming place. 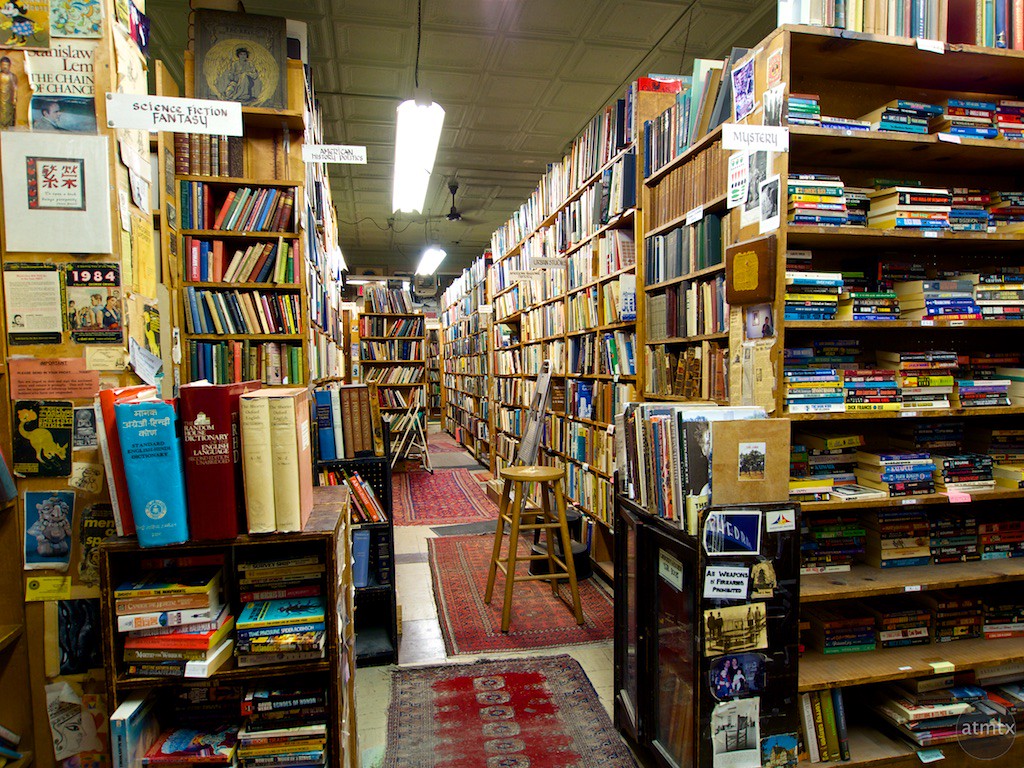 State Street, a shopping district, ties the Wisconsin Capitol and downtown to the University of Wisconsin campus. We enjoyed walking the area which was filled with local stores, cafes and sometimes quirky restaurants. We didn’t have time to go to State Street Brats but it attracted my attention with a mini Statue of Liberty and several steers, which reminded me of Texas. Our favorite was Paul’s Book Store with stacks of history ready for browsing. 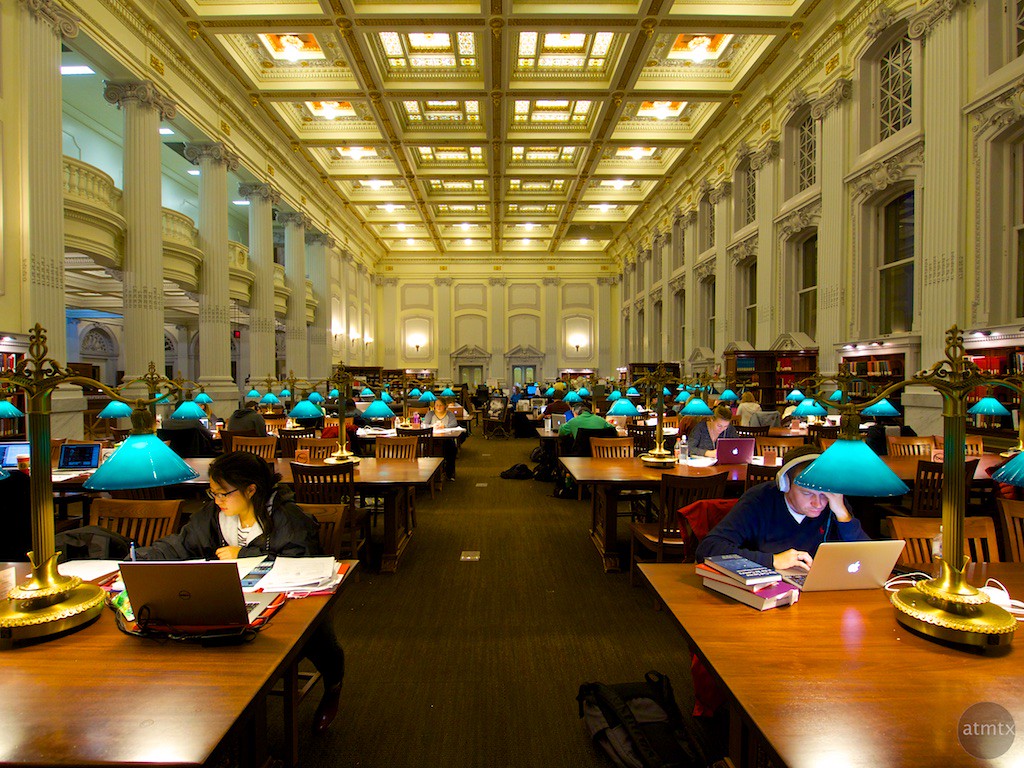 I mentioned previously, that I decided to bring only one (serious) camera. The super-wide 9-18mm was my primary lens, which I used for all of these photos. It worked well and it was refreshing to use just a single camera.

I frequently bring multiple cameras, sometimes for comparison and testing purposes. Unfortunately, having more cameras can be detrimental to good photography, not only because of the increased weight, but also it adds more distractions.

I knew I would shoot a lot of architecture and the wide-angle works great for that. I also made snapshots of my boys at 28 to 36mm equivalents. The Olympus 9-18mm was more versatile than expected and with the great in-body image stabilization on the OM-D E-M5 Mark II, even a slow f4 to f5.6 aperture wasn’t an issue.

It was finals week at UW Madison and you can see them studying hard in the old library. I shot this at 1/25 of a second at ISO 1000 which was easy. In Chicago and at night, I started to pushed the limits of the camera.

I brought a tripod with me because I anticipated a lot of urban night photography. Chicago is one of the great cities for architecture and I was looking forward to doing my urban HDRs. I created some HDRs in Madison too, mostly of the state capitol at night.

But I noticed that I could often get away with not using a tripod. With the wide-angle lens and the awesome image stabilization, I started to shoot at slower shutter speeds, hand-held. For this image of the Chicago river front, I shot it at 1/5 of a second at ISO 1000. It was a low enough ISO to give great results and I didn’t have to mess with a tripod. Later, I even got some clear shots at 1/2 of a second. Amazing.

If I have a choice, I prefer not using a tripod since it allows me to create more free form compositions and it’s a lot faster. Tripods tend to be more restrictive, though they do have advantages, if I’m willing to put up with them.

Here, I wanted to capture the color and drama using HDR. I also did some extra layer blending to get the colorful squares on the elevated train station. This is something that wouldn’t be possible with a single hand held shot.

I also shot a bunch of images on tripod but ended up doing layer blending instead of creating an HDR. The first image on this post, of the Chicago theater, is such an example.

Tripod based photos are high quality for several reasons. First, I shoot them at ISO 200 for lowest possible noise. I also shoot at f5.6 which is sharper edge to edge than at the wide open f4. Finally, a tripod is sharper because it is ultimately more stable than image stabilization.

Of course, tripods are a pain in the neck and you can’t use them everywhere. I shot this in a dark movie theater at 1/5s at ISO 4000. We missed the opening of Star Wars Episode VII in Austin so we caught it in Chicago. It was a really nice theater, the best I’ve ever been to. Three thumbs up for the movie too. 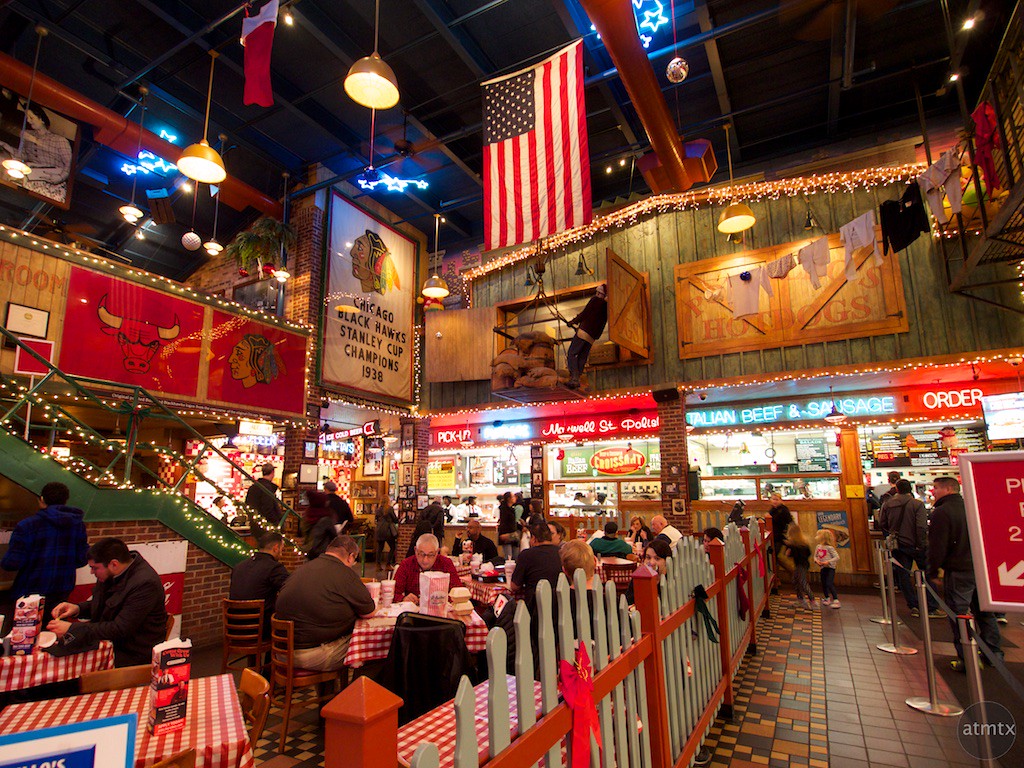 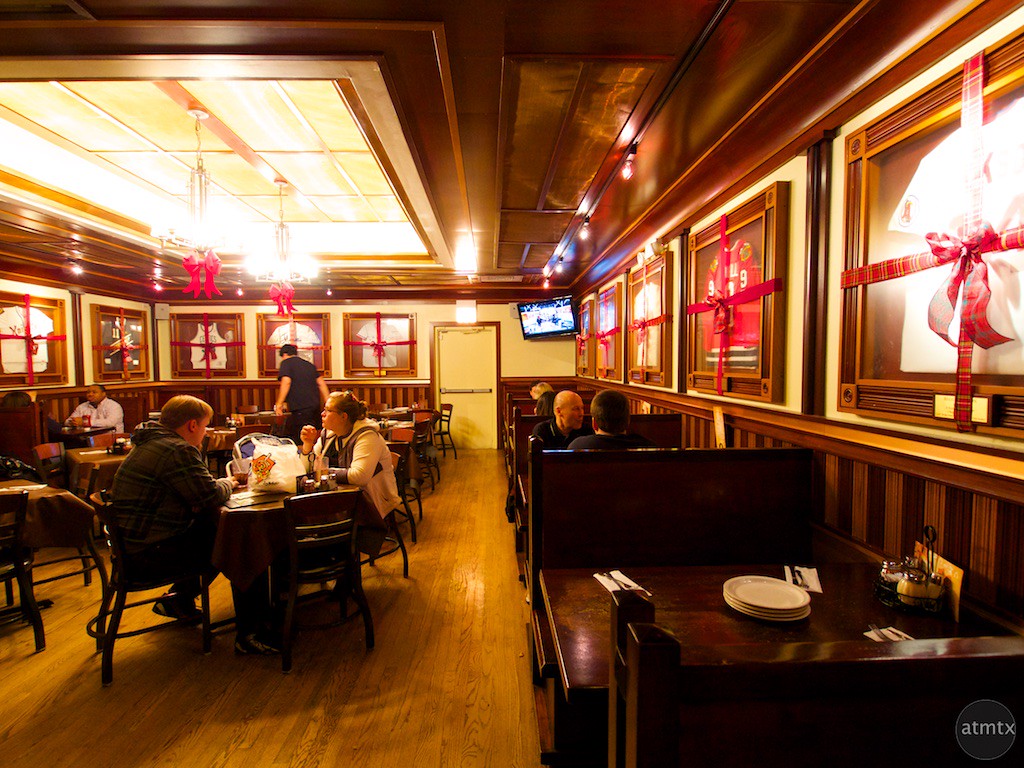 We did a sampling of Chicago food. Portillo’s was unexpectedly exciting, visually. I had my first Chicago style hot dog as did my younger son. The older one had an Italian Beef sandwich, which was not my favorite. I prefer a similar yet different Philly Cheese Steak instead.

What’s a Chicago trip without deep dish pizza? Geno’s East, Giordano’s and Uno’s are the famous ones. A few locals recommended Lou Malnati’s and we weren’t disappointed. It’s probably the best Chicago Style Pizza I’ve had. We went there for dinner on Christmas Eve and the good food and warm atmosphere made it the perfect place for the holidays.

Back in the late 80s, I actually lived in Chicago for 6 months — part of an out of town work assignment. I had a great time living downtown in the loop. Now, some 30 years later, Chicago’s better than ever. We were lucky enough to stay near Wacker Drive and Michigan Avenue in the heart of downtown. We were only there for 3 days but I got a nice collection of images.

This is one of my favorites. An iconic view of the Wrigley and Tribune buildings on the other side of DuSable Bridge. You can see by the flags that it was a windy night in the windy city. I was lucky that it was balmy 43 degrees.

My older son liked Chicago, which surprised me. He tends to get overwhelmed by the big cities. After all, he’s grown up in the quiet and comfortable Austin suburbs. Me, I eat this stuff up. I’m a product of New York City, so I love shooting the big cities.

Out of the three, he liked University of Wisconsin the most. A lot of it, I think, is due to Madison. It’s a friendly place and has that nice college town atmosphere. Will he like the cold? That’s the big question and something that we still can’t answer.

14 thoughts on “My boys and I visit Madison and Chicago”