The fun part of a behind the scenes is to see the studio and the lighting equipment. Kirk has a really nice space, separate but steps away from his house. You can see the elaborate setup used to make professional portraits. The bigger the light and closer to the subject, the softer the lighting. The main light is a gigantic softbox camera left.

Kirk also set up a pair of reflectors to the right, which you can see in the first photo. Out of view is a second light high and to the right.

I delivered 42 behind the scenes images of the actual photoshoot to the client, of which I selected eleven for this post.

You can get a better idea of the lighting setup in these two photos. The reflectors and lighting were adjusted during the session, depending on subject placement and the effect being sought.

During the photo session, I primarily used the Fujifilm 18-55mm f2.8-4 zoom. It allowed me the flexibility to shoot wider and longer than my 23mm f2 and 35mm f1.4 primes that I used during the kimono fitting. However, for these two photos, I temporarily changed back to the 35mm f1.4 prime to get the shallow depth of field effect I was looking for.

All of the photos in this mini-series are JPEGs that I shot with the Fujifilm X-T10. I also shot in RAW. However, since the skin tones look so pleasant, I opted for lightly tweaked JPEGs instead. That’s one of the things I like about the Fuji colors, they look great for people. 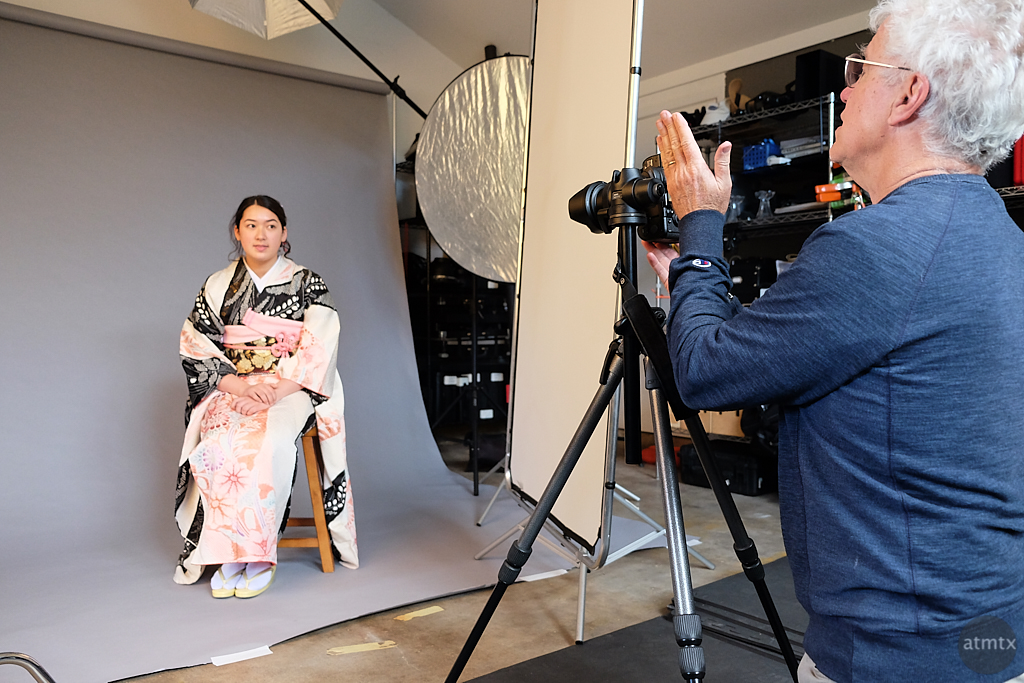 I’m not very adept at directing people, which is certainly a fundamental skill in portraiture. Kirk, of course, excels at this. He gently guided both Anna and Ayako, which you can see in these photos. Kirk also has a way of making people feel relaxed, allowing him to create natural, unforced portraits.

I love this photo of the mom and the kimono fitter hovering over Anna. This was certainly a group effort, using the skills of multiple people to get it all right.

By the middle of the session, Anna was an old pro. Her natural smile was on display. I caught one as she smiled at her mom.

Finally, a quick image review that Kirk shared at the end with Anna. You tell the Panasonic S1R, and the zoom lens is a hefty combination.

I hope you enjoyed this three-post mini-series on this unique kimono photoshoot. It’s something different from my usual street or travel photography. However, the techniques I used to make these behind the scenes photos are similar to what I normally use. I shoot in available light, from different angles, and try to capture optimal expressions. I just applied these in a different context.

6 thoughts on “Behind the Scenes: The Kimono Photoshoot”