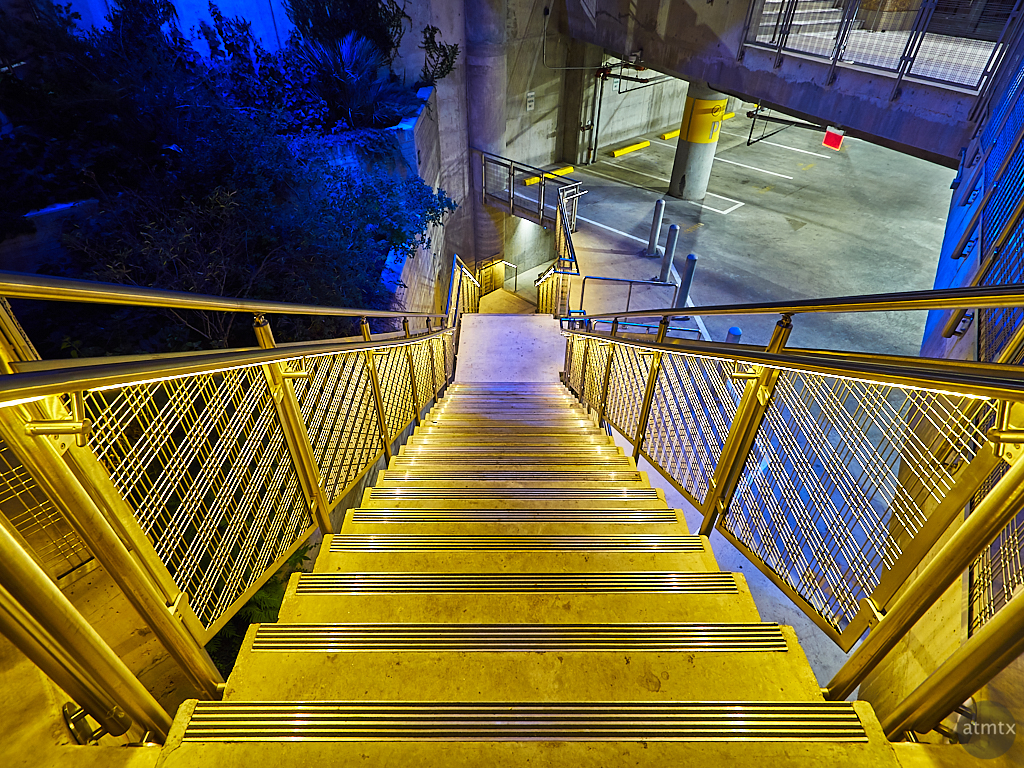 Yesterday, I featured a short photo essay around a staircase at the new Austin Central Library. On a whim, I processed a similar photo that I also captured with my Olympus PEN-F. The results were surprising and dramatic.

While I happily showcased photos that I shot with the Canon G7X Mark II for this recent downtown series, I also brought along my Olympus with a wide-angle lens. I shot more with the Canon, partially because I’m enamored by my wide-angle Cinematics, but also because the small camera is so convenient to use. It was also a test, to see what kind of quality I can achieve.

For the most part, I was satisfied. Until I looked at the results from the Olympus.

I shot today’s photo with the PEN-F and the Olympus 9-18mm f4-5.6 lens. I amped up the colors to achieve this golden look for the stairs, with an equally contrasting blue. If you look at yesterday’s photos, you’ll notice a similarly framed shot with the Canon G7X Mark II. While the focal lengths and aspect ratios are different, they are close enough to make comparisons.

The sensor size, optics and image processor all matter. By using a smaller camera, was I limiting my image quality? Well Yes, but the considerations are more complicated. Where is the photo going to be viewed? With Instagram on a smartphone, image quality is not going to matter as much. How about on a 27″ computer monitor or printed large on metal? Also, how much gear are you willing to carry?

Want higher image quality than a PEN-F? Use a full frame camera or better still, medium format. But in addition to the larger body and correspondingly large lens, you will also need a beefy tripod. The amount of gear you’ll need to haul around will be considerable.

Which goes to show, there are always tradeoffs. For me, the Olympus works well for my serious photos, both around town and during travel. As a bring anywhere, pocketable camera, the Canon G7X Mark II does a good job. Using both together, I have an extremely versatile kit.

2 thoughts on “Reducing Quality for the Sake of Convenience”