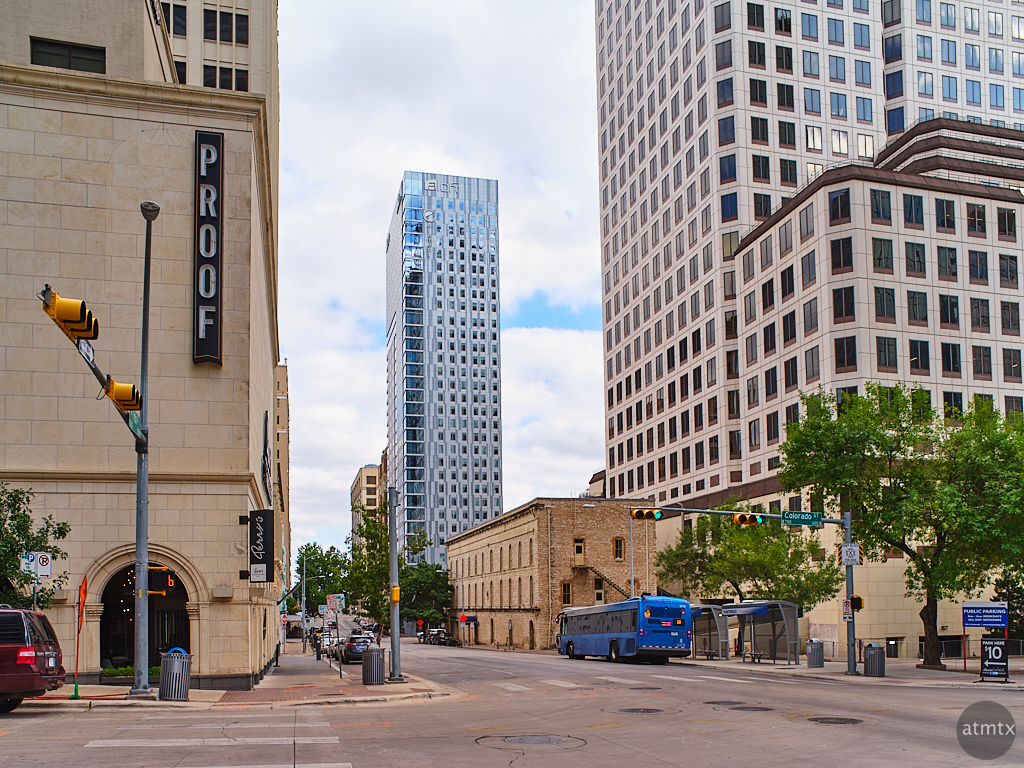 I mentioned, in passing a a couple of days ago, that my newest downtown Austin posts have some technical differences from what I did last year. The most obvious is that they are in color. But, behind the scenes, there’s a lot more — which I’ll explain in today’s post.

Remarkably, given how many cameras I own, each with different lens systems, I never owned any lens adapters. That was until I bought this special lens adapter from Fotodiox. This allows me to attach old Mamiya film lenses to my Fujifilm GFX 50R. I haven’t talked about my Mamiya medium format system much, though here’s a post from six years ago. Back then, I managed to collect 5 Mamiya lenses, and the 35mm f3.5 would particularly useful on my current Fuji medium format system. With the crop factor, it gives me a 28mm equivalent view. Which is a lot wider than my native Fuji lenses.

The Fuji 50mm f3.5 has been my go-to lens, which gives me a 40mm equivalent view. Not very wide, but I’ve managed to do quite a bit of architecture with it. The 28mm equivalent from the Mamiya gives me more breathing room. That’s what I’m using for this current downtown Austin series. Equally important, this adapter allows me to experiment with tilt-shift photography too. Which can be especially useful for architecture.

It’s the shift that I’m interested in using, which allows me to photograph tall buildings without the leaning effect you typically get. I line up my camera parallel with the ground and shift the entire lens assembly upwards. It doesn’t work in all cases since a building can still be taller than the adapter’s shift capabilities. But it does help. Coupled with additional distortion correction, if needed, via software. I can create proper looking architectural photos.

If done correctly, things look perfectly normal. In fact, this setup help reduces some of the drama of leaning buildings. I cropped the top image to roughly match the framing of this photograph I made a year ago. Yes, I didn’t take it from the same spot, so the framing and angle do not match. However, it illustrates my point. Notice how the buildings in today’s photos are — more or less — perfectly parallel with each other. The buildings from a year ago are leaning mightily.

Creatively, you might decide that you like the leaning structures. That’s fine. However, for more formal architectural photography, these types of distortions are often minimized.

I’ll show more examples in a future post. I’ll also talk more about the Mamiya 35mm f3.5 lens and the Fotodiox adapter. However, for today, I wanted to introduce this new gear and technique. Which I’m using in this series.

6 thoughts on “Tilting, Shifting and Adapting”