Disappointingly, there was no Austin Country Club fireworks show this year. There are never any details on their website, so it’s always a hit-or-miss proposition. Though in the past, any cancellations were due to rain. Not this year. Was it budget cuts? The overly dry fire-hazard type conditions? Who knows.

I had a sneaking suspicion they had canceled the event as soon as I climbed the rocky plateau — with no country club members assembled on the green and the sparse spectators on the boats and the bridge. I stayed up there anyway, hoping for a worthwhile sunset that never materialized. Already invested in the visit, I resolved to shoot long exposure light trails on the bridge. The rest of the crowd stayed, too, not suspecting the fireworks cancellation.

Individuals from the boats and the neighborhood launched their scaled-down pyrotechnics. Though modest compared to the country club, it added some festiveness to an otherwise slow evening.

Then the fireworks gods smiled down on this hapless photographer as someone shot fireworks off the nearby cliff. Though small, the proximity made for a surprisingly adequate explosion. Hitting upon the idea, I used the scraggly tree silhouette as a foreground element. What resulted was most unexpected and satisfying. 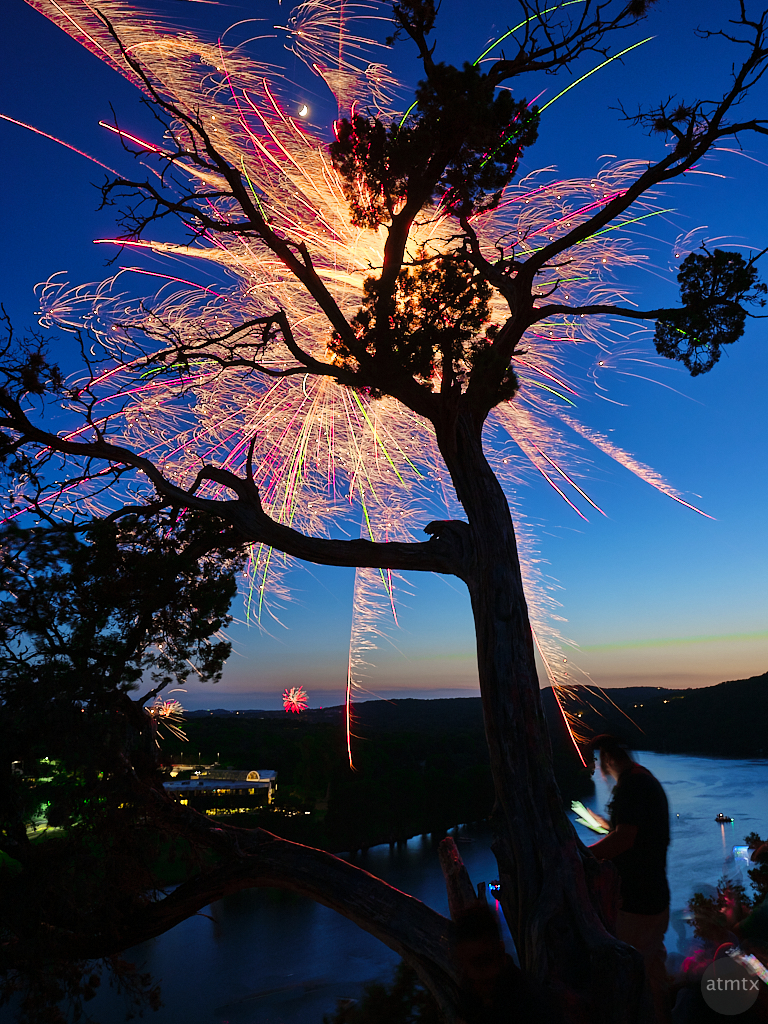 I made several attempts, and these two were the most spectacular, setting the camera to about an 8 to 10-second exposure. Soon as I heard the launch, I pressed the shutter. Notice the two other fireworks explosions in this second picture. They are off in the distance on the other side of the lake.

While completely different from what I planned, the resulting images are worthy in their way. They’re probably more original and better than my expectations. I’m glad I remained flexible to the possibilities.